Harvesting the Future: Water Bottles Made from Corn-Based PLA Plastics 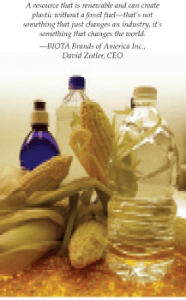 PLA is the future of the bottled water industry and the entire packaging industry. The green revolution has burst into the drinking water industry like a bag of microwave popcorn. New technology has created biodegradable plastic bottles out of corn. Bottled water manufacturers can shed the stigma of PET and the criticism from a growing number of environmental groups (and consumers) who find the lifespan of a typical disposable water bottle unacceptable. This new corn technology, known as Polylactide Acid (PLA) is as durable as PET plastic, has identical clarity and appearance to conventional water bottles yet it biodegrades in 100 days instead of more than 2,000 years.

Developed through a 50/50 partnership between The Dow Chemical Company and agriculture giant Cargill Corp., PLA plastics are sold through the company NatureWorks LLC and are already in use in a variety of food manufacturing sectors for packaging, labeling and more. The company markets the products under the name NatureWorks™ PLA and Ingeo™ Fiber. In late 2004, the technology debuted in the form of a water bottle by BIOTA Spring Water of Colo., which is poised to become the torchbearer for a new era in bottled water manufacturing.

Applications
Like PET, there are a host of applications in the bottled water industry where PLA could be utilized. From water bottles to labels, the corn-based plastic presents the opportunity to develop a product that is 100 percent biodegradable and recyclable:

Rigid thermoforms
In addition to outstanding gloss and clarity, the relative ease of processing that PLA exhibits in extrusion and thermo-forming enables it to be used for both conventional and form-fill seal applications. Its stiffness enables more efficient down-gauging versus incumbent materials like PET and the environmental attributes make PLA a preferred packaging alternative where consumer appeal and/or disposal requirements are significant issues. A host of conventional blow molder manufacturers are currently marketing new systems with the capability of using PLA plastics (See this month’s Executive Insight column) and many systems can be seamlessly converted to PLA use with minimal disruption.

Films and bags
With its excellent performance capabilities and a unique blend of physical properties, PLA is well suited for a wide range of applications in the film market including heat-seal overlays, flow wrap, twist wrap, labels and carrier bags. It is being marketed as an alternative to cellophane and a low-temperature, heat-seal layer and/or flavor and aroma barrier in co-extruded structures where its combination of properties allows layer simplification or replacement of nylons.
Performance attributes

NatureWorks PLA exhibits several performance attributes that make it an attractive and versatile polymer to packaging manufacturers and brand owners in the packaging industry:

The environmental impact
A PLA bottle is derived entirely from corn, making it an environmentally preferable option to petroleum-based plastic packaging. In addition to its natural source benefit, the production of PLA uses up to 50 percent less petroleum and contributes 40 percent less greenhouse gases to the atmosphere than traditional plastic materials generate in production. PLA is also compostable in commercial compost facilities and offers future potential for additional reclaimation methods like hydrolysis (chemical recycling).

Presence in the water industry
“With an explosion of waters, juices, teas and other drinks crowding the beverage case, it’s easy for new products to get lost in the clutter,” said Brian Glasbrenner, business development manager with NatureWorks LLC. “That’s why beverage companies have sought a new path to innovation: a one-of-a-kind bottle.”

PLA already exists in the water industry in a handful of small, but successful operations. The Tipperary Natural Mineral Water Company, based in Tipperary, Ireland, is turning away from traditional paper and plastic cups and stocking its water coolers with PLA drinking cups, the first in Europe to make the switch. Tipperary began initial deliveries of more than 500,000 cups and anticipates replacing its entire water cooler service of 30 million single-use cups in the near future.

Marrying product and package, BIOTA (www.biotaspringwater.com) is the first to bottle products in corn-based NatureWorks™ PLA and they are relying on the natural packaging to help them successfully vie for shopper attention and shelf space. BIOTA is an acronym for “Blame It On The Altitude,” but the ancient Greeks also used the term to mean way of life. BIOTA Rocky Mountain Spring Water comes from one of the highest natural alpine springs in the world, located above Ouray, Colo. The film labels on the bottle are also made of PLA and although the cap is still traditional plastic, BIOTA is investigating options to make the cap from a more ‘earth-friendly’ material.

“BIOTA water is the perfect combination of premium spring water and environmental respect,” said BIOTA CEO David Zutler, who markets the product as PLAnet-Friendly Water. “Our PLAnet-friendly packaging, long-sought by consumers, clearly positions BIOTA to stand out as the best choice among bottled waters worldwide.”

A United Kingdom-based company, Belu Spring Water (www.belu. org) also recently announced plans to use PLA for its water bottles. The company has integrated the eco-friendly plastic into its overall marketing campaign for the product and Belu has quickly gained popularity in Britain as ‘socially responsible water’. All the profits from sales of Belu, which is available in many high-end restaurants and grocery chains, are donated to clean water projects in the Third World.

Bottles with a difference
Like PET, the corn-based plastic permits a multitude of varied and complex bottle shapes and sizes to draw the consumer’s attention. Monolayer PLA bottles can be formed on the same injection-molding/stretch blow-molding equipment used for PET, with no sacrifice in production rate. In addition, sensory paneling of several foodstuffs stored in PLA bottles show the corn-based material offers comparable organoleptic properties (similar taste, smell, feel and look) to glass and PET—confirming the suitability of PLA for food and beverage bottling.

What’s different about PLA is the range of disposal options afforded by the plastic’s natural source. Most PET bottles end up in landfills, but PLA has the flexibility to be disposed of in several manners—including composting and recycling—which means it can play a key role in landfill diversion.

Testing of PLA bottles shows they will degrade in commercial composting conditions in about 75 to 80 days, Glas-brenner said. Additionally, NatureWorks has been following guidelines set by the Association of Post-consumer Recyclers (APR) in its Champions for Change program to ensure the successful integration of PLA into the U.S. recycling stream. Recycling facility trials show PLA can be collected through current plastic recycling channels and the technology exists to efficiently separate PLA from other commonly recycled materials.

NatureWorks hopes to stair-step from dairy and water to juices and ready-to-drink teas and is developing these applications with several beverage companies. “With increasing consumer demand for more environmentally responsible packaging solutions, we’re expecting more beverage companies to look to natural bottles as a way to send a message about their brand,” Glasbrenner said.

About NatureWorks LLC
Based in Minnetonka, Minn., Nature Works LLC is the first company to offer a family of commercially available polymers derived solely from annually renewable resources with cost and performance that compete with petroleum-based packaging materials and fibers. The company applies its unique technology to the processing of natural plant sugars to create a proprietary polylactide polymer, which is marketed under the NatureWorks® PLA and Ingeo™ fiber brand names. For more information about NatureWorks and its brands, visit www.natureworksllc.com