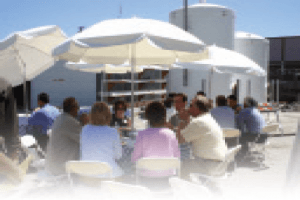 Most organizations have a hard time keeping their members motivated during the summer months, what with the allure of sun and surf…but not PWQA. The Pacific Water Quality Association has had two successful gatherings during this season, both well attended. Legislative activities, conference planning and recruitment efforts all played a part, of course, but the key to president Mark Howlett’s ability to gather the members together might just be Sheboygen bratwurst!

On August third, the second barbecue was held, this one in northern California at the new home of Rayne of San Jose. Even the weather cooperated, blue skies and sunshine greeting all as they arrived. Pentair, Inc. is a global leader in water technologies, and that leadership is obvious by the way they have taken the frontrunner position at these soirees. They provided the flavorful bratwursts – flown in fresh from Wisconsin – and the grilling talent, in the personification of Craig Bibee. His devotion to duty, in fact, resulted in charcoal-cooked perfection for all. 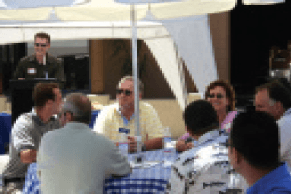 Administrative whiz Kristi Pihl saw to the comfort of all, from the umbrella tables to the fruit salad. Rayne’s Bob Denne baked extraordinary cookies for dessert. If a career in the water treatment industry doesn’t work out, Bob needn’t worry, as he can work full time as a pastry chef!

Rayne of San Jose is in the midst of building out their new home, creating a customized space. After half a century at one location, they lost their lease and began the search for a facility that can meet their needs for the next half century or more. Over 11,000 square feet, their two-story structure will enhance their ability to serve customers for many years to come. Changes begin right out front in the parking lot, where they have installed two enormous tanks, (one for salt, one an exchange tank). Entering the ground floor reception area, the customer service suite is immediately on the left. Just behind, a clean room has been constructed for RO

supplies. Sales and administrative offices, conference space and even a kitchen and break room complete the inner space. Out back, Rayne service trucks are getting their own customized area, which will enhance speed of set up and stocking. In short, Rayne of San Jose will shortly be enjoying a state of the art new home. Their new location is 2941 Daylight Way, San Jose, CA 95111.

PWQA has enjoyed a strong period of growth, now proudly sporting over 100 members, according to Howlett. He gave the membership committee report, noting the success of last year’s 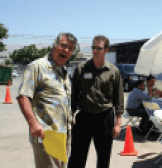 Legislative Day and encouraging all to attend the next such outreach to California’s elected officials in Sacramento. Howlett also noted that PWQA is actively seeking nominations as there are vacancies on the Board of Directors. These positions serve for a three-year term. Howlett also reported on the work of the convention committee, which is working on the conference and show scheduled for November 2-4 at the historic Mission Inn in Riverside, Calif. Certification exam testing will be offered at the conference, and sponsorship opportunities are still available. Exhibitors and attendees are encouraged to reserve early as turnout is strong for the annual event. Within a month, it will be possible to make such reservations on line at www.pwqa.org but at press time, mail and phone are the only options. (Do note that auctioneer John Pomeroy will once again join the festivities!)

After thanking those attending the barbecue, he turned over the microphone to committee chairs for an update on different initiatives.

Bob Denne reported that the group’s PAC has approximately $8,000 available for political activities. Mike Meca of Performance Water discussed public relations activities, which led to an overall look at different legislative ‘hot spots’ the organization is monitoring. Referring to the ongoing ban in one town in the Santa Clara Sanitation District, “Despite the Fillmore softeners ban, chloride is still rising,” he summed up, “What will they do next?” 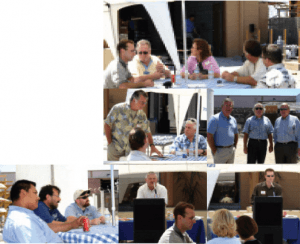 Elsewhere in the state, PWQA works with government and community groups to find compromises in the salinity versus water softening debate. They are part of a coalition (which includes more than half a dozen municipalities) holding salinity reduction workshops, for example, and have been involved in California’s pilot study of a state-subsidized rebate program designed to encourage automatic softener swap out or change (switching clocks to meters, for example). “Such partnerships eliminate litigation and allow us to continue to work profitably to provide California homeowners with softened water,” Howlett noted.

Lynda Thomson of U.S. Resin Company discussed PWQA’s newsletter, which is sent out by email and fax monthly and via post quarterly. Sponsorship opportunities help defray the costs, and include website advertising spots. C.F. “Chubb” Michaud encouraged members to direct questions to the technical committee, a valuable resource for group members. The committee is pulling together education sessions for the upcoming conference.

Former PWQA president Howard Carter noted there are always new challenges on the horizon. “Two municipalities are about to begin recycling water, and that will heat up the softener debate. Right now, they are on record stating they have no intention of outlawing softeners,” yet we need to stay vigilant while educating both government and community leaders on the facts and science of water softening. “Conservation and sustainability and water softening are possible if we work together.”