The Microbial Quality and Safety of Bottled Water

The bottled water market has steadily increased over the last decade and is now the second largest category of commercial beverage by volume sold in the United States (carbonated soft drinks rank first). Consumers like the ease and portability of bottled water and presumably have confidence in the quality relative to taste, odor and public health benefits. Like tap water and POU treated water, bottled water is not sterile. Unlike tap water, it is not regulated by the U.S. Environmental Protection Agency (U.S. EPA) but rather the Food and Drug Administration (FDA), as a food product. These two facts, in part, have led to some misconceptions about the safety and quality of bottled water.

Bottled water statistics
According to a Water Quality Association survey1, 39 percent of home occupants reported drinking bottled water. Globally, the bottled water industry is growing at a phenomenal rate and in the U.S. alone, the total (U.S.) category volume is expected to exceed 7.3 billion gallons in 2005; an 8.1 percent increase over 2004’s volume level (Beverage Marketing Corporation, 2005. Available at www. ibwa.org). The average volume consumed per person in 2005 is estimated at 25.7 gallons.

Pristine water sources
Bottled waters differ primarily due to the type of source water from which they are collected and the additional treatments that are imposed on those source waters, including:

Although many bottled water companies pride themselves on having highly protected natural sources (i.e., springs and artesian wells), historical disease outbreaks in tap water utilizing groundwater supplies have raised new questions about the quality of these untreated sources subject to contamination from animal populations and excessive runoff during severe storms. Although the majority of groundwater is still thought to be free of disease-causing microbes, increased surveillance with improved methodology has presented evidence that human enteric viruses, ulcer-causing bacteria and harmful protozoa (Cryptosporidium) can be found in groundwater (reviewed in On Tap, Dec. 2004). Of the 751 drinking waterborne disease outbreaks that occurred in the U. S. from 1971-2000, 467 (62 percent) were linked to groundwater systems2. During the 1999-2000 surveillance period, 29 of the 39 drinking water outbreaks (74.4 percent), including an outbreak associated with bottled water, were associated with groundwater sources (wells and springs)3.

Bottled water gets a bad rap
Bottled water is not, nor should it be, sterile. Heterotrophic plate count (HPC) bacteria are commonly found in bottled water, as well as most other drinking water sources, and can grow over time, reaching concentrations of up to 10,000 to 100,000 HPC bacteria per ml (Table 1). 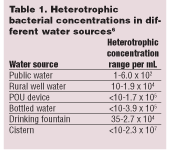 These generally harmless bacteria are normal components of our environment and can be found on our skin, in soil and in very high numbers in food products. Fruits, vegetables, meats, cheeses, yogurt and pasteurized milk commonly contain tens of thousands to millions of HPC bacteria that are acceptable and consumed unnoticed4,5.

In 1999, the Natural Resources Defense Council (NRDC) posted what was perceived as a generally negative report on bottled water (Bottled Water: Pure Drink or Pure Hype? www.nrdc.org), citing discrepancies in U.S. EPA tap water standards and regulations versus FDA bottled water standards. Also cited was less stringent monitoring requirements for bottled water and a four-year survey where they concluded that bottled water was not as pure as consumers were led to believe.

Later that year a rebuttal from the Drinking Water Research Foundation (DWRF; http://www.dwrf. info/nrdc_ bottled_water. htm) was posted in defense against the allegations by the NRDC. While both reports exhibit the fine art of splitting hairs, points are still scored on each side.

Conclusion
Not all bottled waters are the same and surveys reporting a variety of contaminants can be randomly found around the globe. Despite criticisms, the safety record of bottled water is exemplary and it is potentially a life-saving product for those who do not have access to adequately treated water supplies, including supplies contaminated during disaster events. Generally, bottled water offers a safe, convenient alternative to tap water and many consumers report that they prefer the taste of bottled water. Consumers are advised to be informed about the source water quality and treatment level of bottled water consumed, especially when traveling abroad. Immunocompromised individuals who are at increased risk of microbial disease are cautioned against tap water consumption and should also be wary of bottled waters that do not employ U.S. EPA approved methods for Cryptosporidium removal11.