By Yoonjin Lee and Sangho Nam

Introduction
Disinfection has been used in the treatment of drinking water for many years to control waterborne diseases. Effective control of resistant pathogens in potable water requires not only the use of efficient disinfectants and optimal design criteria to protect public health cost-effectively while minimizing the risk of exposure to disinfection by-products.

Chlorine is the most common disinfectant used in drinking water treatment because it is very economical and has good germicidal ability. But it reacts with organic material to produce trihalometh-anes  (THMs) that are suspected carcinogens. Recent research has focused on alternative disinfectants such as ozone and chlorine dioxide.

Ozone is one of the most powerful oxidizing agents used in environmental applications around the world. Compared to chlorine, ozone is more efficient for inactivation of virus and pathogenic protozoa. Ozone is being used increasingly as a pretreatment to reduce the formation of potentially harmful chlorinated organics. Several studies suggest that ozone produces higher levels of simple aldehydes and keto acids than other major disinfectants and can lead to the formation of brominated by-products when applied to waters with moderate to high bromide levels.

Kinetic disinfection models are the basis for assessing the performance and design of contactor systems. Over the years, a number of kinetic models have been proposed in order to help formulate criteria for an optimal disinfection design. Model adequacy depends on the robustness of the underlying inactivation rate law if the model accounts for the disappearance of the chemical disinfectant during the contact time. The chlorine treatment (CT) concept is a simple approach used to develop disinfection requirements under the water treatment rule. The validity of using the CT concept to represent the inactivation kinetics of total coliforms including that by various disinfectants including free chlorine has been questioned recently.

There is a need for development of a more comprehensive model to determine future requirements for drinking water disinfection. In 1989, research was initiated on the use of alternative disinfectants in Korea; at present, free chlorine is the most commonly used disinfectant at Korean water utilities. Excessive bacterial re-growth in the distribution system has been reported by the Ministry of Environment and viruses in Seoul tap water have been reported by Lee and Kim, prompting a more comprehensive assessment of future disinfection requirements for drinking water.

However, there are not enough reports on the kinetics under conditions likely to produce outbreaks of waterborne disease. Korea’s new water quality regulations stipulate non-detectable total coliforms in tap water and strict regulation of viruses and Gardia Lamblia.

The main objectives of this research were to investigate the inactivation kinetics of total coliform as the indicator organism when chlorine, chlorine dioxide and ozone are used for drinking water treatment. This study was carried out to test the various kinetic models applied to potable water disinfection. Another goal of this research was to provide a statistical model for physio-chemical factors influencing disinfection. 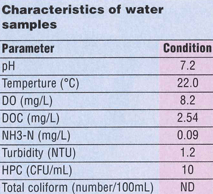 Sample Preparation
Samples were taken from a water treatment plant with a nominal capacity of 1,450,000 m3/day of water from the Han River. The plant uses coagulation, sedimentation, filtration and chlorination. Water samples were collected at the filter inlet using sterilized one liter Pyrex® bottles that had previously been treated by acid washing and baking at 300°C to remove all carbon compounds. Appropriate volumes of the sample were filtered through sand columns in the laboratory. Sample characteristics are described in the following table.

Microorganisms and culture conditions
The samples to be used for preparation of stock inocula were collected from a sewer manhole adjacent to Korea University, located in the eastern part of Seoul. They were filtered through one 1iter. membrane filters. The 10 mL of filtrate was placed on M-endo medium in a petri dish and incubated for 24 hours at 35°C. The colonies that formed were placed on a solution of nutrient broth and incubated for 24 hours at 25°C. The coliform bacteria were isolated by centrifugation at five x 103 G for five minutes, washed twice and re-suspended in buffer solution free from chlorine demand at pH 7. The coliform bacteria isolated from the media were vortex mixed and the fresh cell suspensions in the chlorine-demand-free solution were used for all experiments. The density of total coliforms was between 2 x 106 and 8 x 108 cfu/100mL.

Disinfection procedure
The reactors were covered with aluminum foil to prevent stray ultraviolet radiation from affecting the disappearance rate of the oxidant. The reactors, test water and microorganisms were slowly brought to the desired temperature using the incubator. The microorganisms were acclimated to the water bath for a minimum of 60 minutes. Vigorous agitation of the microorganisms was essential prior to addition of the oxidant. The concentration of the stock disinfectant solution was measured immediately before the experimental trial and a volume of stock solution corresponding to the prescribed initial disinfectant dose was then added to the coliform-containing reactor using a pipette. This procedure was repeated for the control reactors as well. At the end of the contact time, remaining oxidants were neutralized using appropriate reducing agents. Finally, the reactor vessels were sampled and analyzed for surviving microorganisms.

Analytical methods
Free chlorine levels were determined by the DPD colorimetric method with a chemical chlorine kit. The concentration of the stock chlorine dioxide solution was determined with a UV-visible spectrophotometer. Absorbance readings were taken at 360 nm in a one cm cuvette. A molar absorptivity of 1,250 M-1cm-1 at this wavelength was used to calculate the corresponding concentrations of chlorine dioxide. Ozone residual analyses were conducted by the standard colorimetric method. Indigo stock solution was prepared from potassium indigo trisulpho-nate-concentrated phosphoric acid and anhydrous monobasic sodium phosphate. Samples were analyzed at 600 nm with a UV spectrophotometer.

Total coliforms were enumerated according to a membrane filtration procedure from the U.S. standard method 9222B. The samples containing coliform bacteria were filtered through a membrane  0.45 microns in porosity. Each component of the filtration system was sterilized. A membrane was placed on the apparatus under sterile conditions and aliquots of 1, 10 and 100 mL were filtered. The membrane was then placed on agar M-endo medium in a petri dish and incubated for 24 hours at 35°C. Results are expressed as coliform colonies per 100 mL.

About the authors
Corresponding author Yoonjin Lee is in the Department of Civil and Environmental Engineering at Virginia Polytechnic Institute and State University, Blacksburg, VA 24061. He can be reached at leeyj@vt.edu. Sagnho Nam is a faculty member in the Department of Environmental Engineering, Konkuk University, 1 Hwayang-dong, Gwangjin-gu, Seoul 143-701, Korea.