Water: Too Much of a Good Thing 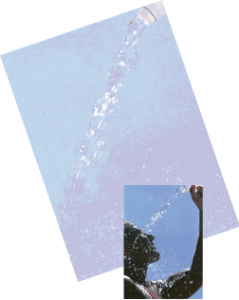 In 2002, a 28-year-old, female Boston Marathon runner, collapsed and died just four miles short of finishing the race. In the same year, a 35-year-old woman running in the Marine Corps Marathon in Washington D.C. collapsed after completing 22 miles and died a day later. The diagnosis: consumption of too much water, leading to critical losses of blood sodium levels. These tragedies sparked a re-evaluation of the conventional wisdom that drinking lots of water during exercise is a must to prevent dehydration. We now know that while dehydration and heat stroke are significant risks, over-hydration is not uncommon among athletes during extreme sporting events. The problem is that while fluid replacement is vital, care should also be taken not to deplete sodium levels in the blood during the process of exercise and sweating.

Eight or more a day
For years health professionals have advised – even urged – us to drink at least eight eight- ounce glasses of water a day. For risk evaluation, the U.S. Environmental Protection Agency (EPA) assumes that every individual drinks two liters (about 68 ounces) of water daily, although this is estimated to provide a margin of safety beyond what most really consume. It seems that we make a conscious effort to drink lots of water each day, as evidenced by the bottles people are toting around everywhere, but how much water do we really need each day? Beyond that, is there an additional health benefit to water consumption beyond basic hydration needs?

While there is interest in the water needs of average individuals, the risk of over-hydration, leading to a condition known as hyponatremia, is only seen in endurance athletes, such as marathon and triathlon runners. Hyponatremia is a sodium deficiency in the blood, or low salt content, which can lead to seizure, coma or even death. The condition is medically characterized at a serum-sodium level of <135 milliequivalents per liter (meq/L). Excessive sweating over long periods of time accompanied by prolonged consumption of water without an intake of sodium, an essential electrolyte of the human body, are prerequisites to the illness which is why cases are not present in all athletes or avid exercisers.

Death by water
After the deaths of the Boston and Marine Corps Marathon runners, more focus was placed on hyponatremia. In particular, a recent study, published in the New England Journal of Medicine (NEJM), of 488 runners in the 2002 Boston Marathon documented the prevalence rate of hyponatremia (1.). Upon finishing the 26- mile race, blood samples showed that 13 percent had hyponateremia (a low blood-salt concentration). The intake of excessive fluid was found to be the primary reason for the condition, since 48 percent of the hyponatremic runners drank three or more liters of water during the race. It gets more interesting however. The type of fluid consumed had no impact on the salt levels in the blood. That is, runners who consumed electrolyte-containing sport drinks were not spared from hyponatremia. The researchers explained that the amount of fluid seems to be the greatest risk factor for hyponatremia – not the type of drink – and that monitoring weight gain in the athletes was the greatest predictor of fluid intake levels and risk of hyponatremia.

Although the general (i.e., non-marathon running) population need not be concerned about over-hydration, extrapolation of the data from this study estimates that 1,900 of the 14,573 runners who crossed the finish line in the 2002 Boston Marathon were hyponatremic, with 90 being critically afflicted.

Contemplating the causes
Identification of the cause(s) of hyponatremia has been accompanied by controversy. Previous research and documented deaths suggest a higher prevalence among women, leading to suspicion that something specific to the female gender plays a role. A few scientists postulate that female hormones are a primary risk factor, not a lack of salt replacement. While not exhaustive, evidence from the NEJM study suggests that differences in male and female body sizes, run times and drinking patterns are risk factors rather than gender alone. More research is sure to follow.

Complicated solutions
While the feeling of thirst is a wonderful built-in alarm mechanism, it is reported to manifest after we are dehydrated, not before. Studies of moderately active individuals commonly report that we are frequently dehydrated. Therefore, most of us can keep on carrying those water bottles around, but endurance athletes are advised to carefully plan their fluid intake during training or events.

According to an article in Runner’s World Magazine, the generic recommendation of eight glasses of water a day has been replaced by a more scientific formula based on body weight and individual needs. For moderately active men and women, multiply body weight by .35 or .31, respectively, to calculate the drinking requirement, per day, in fluid ounces. How does that work out? Here are two examples, for a 175-pound man and a 125-pound woman:

There are many sources with slight variation to this recommendation but no consistent medically-based guidelines. To simplify the process of evaluating your individual daily water needs, consider one of the many websites, such as http://www.csgnetwork.com/humanh2owater.html where you can plug in your weight, activity level and environmental conditions to calculate your daily water consumption requirements. There is no absolute consensus on this topic, however. Visit five different websites and you’re likely to get five different quanitities of water as being the right quantity for you. There are conflicting and multiple opinions in the medical world, science sector, sports field and alternative health arenas. Let the website user beware!

Salt intake is also important and most health-based agencies recommend electrolyte replacement sport drinks with adequate levels of sodium to aid in the replacement of salts depleted during exercise. A 2004 publication by the National Academies recommends that healthy adults and children over nine years of age consume 1.5 grams of sodium per day to maintain adequate sodium levels. Of course, this level must be adjusted for those engaged in above average physical activity or in environments that promote increased sweating.

To avoid dehydration, athletes must adjust further to take into consideration excess losses of fluid via sweating but the point is that body weight and gender should be individually assessed. Risks of excessive dehydration and heat-related illnesses are also dangerous and can require emergency medical treatment.

To help balance the risks of dehydration and hyponatremia, the International Marathon Medical Directors Association has issued a fluid-consumption guideline specifically for runners. The guidelines suggest that marathoners should consume between a low of 13 to an absolute high of 27 ounces of fluid per hour. Previously recommended values ranged from 20 to 40 ounces in the same time period, nearly double current values. Professional running and health organizations recommend that marathoners monitor their weight pre- and post- training and events to determine their own unique sweat rate and fluid replacement needs.

Awareness of hyponatremia is much higher now in the runner’s world. Organizers of the Boston Marathon now provide each participant with an informational pamphlet on the importance of controlled hydration, routine consumption of salts in the diet, being mindful of electrolyte replacement and the symptoms of hyponatremia.

Additional sources:
Dietary Reference Intakes for Water, Potassium, Sodium, Chloride, and Sulfate. This reports may be accessed via www.nap.edu. Copyright 2004 by The National Academies.