What’s the difference between a whole-house filter and one that goes on the end of the kitchen faucet? Besides the obvious (that one is filtering all of the water for the entire house and the other filters only water at the kitchen sink) there are big differences in how these two filters are tested under the NSF/ANSI Drinking Water Treatment Units (DWTU) Standards.

Consumers sometimes wonder whether they would be best served by POE or by POU systems. These individuals are are advised to keep in mind the implications of treating at each; some of which are:

These implications have been considered by the NSF Joint Committee on Drinking Water Treatment Units in the development of the requirements for the DWTU Standards. This article examines exactly how the Joint Committee has addressed these issues with respect to POE systems.

POE vs. POU: different scopes for different standards
The DWTU Standards are organized by technology. Certain technologies are amenable to both POE and POU implementation, while others are best utilized in either a POE setting or a POU role, but not both. Table 1

summarizes how the scopes of the Standards vary with respect to POE and POU.

POU is excluded from Standard 44. As mentioned above, it does not make sense to have a POU water softener. If hard water is causing scaling in the kitchen sink, it is also causing scaling in the bathroom and so on. The exclusion of POE from Standard 177 is fairly obvious, too. A shower filter, by definition, serves only shower outlets and not the majority of a facility (although I’m certain some parents of teenagers believe that the majority of their household’s water is being used in the shower!).

One exclusion that is not immediately obvious is POE being outside the scope of Standard 58. There are several manufacturers of whole-house reverse osmosis (RO) systems, so there is a market for these systems and the products exist. However, these products were not around when the Standard was developed. And there are some issues with them that would require new language for the Standard in order to adequately address POE RO systems. These issues include:

Pressure drop and minimum service flow rate
Having adequate pressure and flow of water are concerns to consumers when installing a POE treatment unit. The DWTU Standards address these issues as described in Table 2. 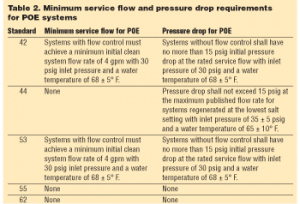 Note that in general, pressure drop of a POE system may not exceed 15 psig at the system’s rated service flow. Pressure drop through a given system increases as the flow rate does, so this requirement effectively limits the flow rates that manufacturers can claim on these systems. By requiring this limitation, consumers can size POE systems for their homes by taking into account their flow rate needs.

The specific test water characteristics required for POU units, and for all systems making health claims, can be achieved under laboratory conditions. However, this strict laboratory control can be difficult and expensive to achieve for POE systems making aesthetic claims to high capacities. Therefore, the requirement for POE systems under Standard 42 is to use a public water supply that complies with U.S. EPA Primary and Secondary Drinking Water Regulations, with a minimum temperature of 20°C (68°F).

Conclusion
Residential water treatment at the point of entry is very different philosophically, in theory and in practice, than point of use treatment. The NSF/ANSI DWTU Standards are written to reflect these differences and contain significantly different requirements for POE and POU systems. These differences not only address the varying concerns in terms of product safety and performance; they also deal with issues related to laboratory testing implementation and costs.

In the future, Standard 58 may be expanded to address point of entry systems. The development of the NSF/ANSI DWTU Standards is a consensus process, driven by interested volunteers. The potential expansion of Standard 58, if it is to occur, will be fueled by these interested parties.

About the author
Rick Andrew has been with NSF International for over six years, working with certification of residential drinking water products. He has been the Technical Manager of the Drinking Water Treatment Units Program for over three years. His previous experience was in the area of analytical and environmental chemistry consulting. Andrew has a bachelor’s degree in chemistry and an MBA from the University of Michigan. He can be reached at 1-800-NSF-MARK or email: Andrew@nsf.org.