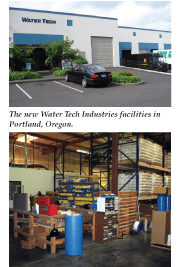 A successful manufacturer is one that can consistently complete two vitally important jobs at the same time, according to Water Tech Industries General Manager Mark Russell.

“On both fronts, we’ve been able to make a real name for ourselves,” Russell said. “We are the only ones out there selling the Reionator™ and our customer service, our ability to help dealers of any size be successful is second to none.”

Founded in 1987, Water Tech Industries began as a small manufacturer in Provo, Utah. Company founder, Tom Felt organized Water Tech after developing the Reionator™, a unique multi-resin softening system that removes both hardness and chlorine from water. A decade later, the small firm served less than 10 water dealers with the Reionater™ and other water treatment systems.

That year (1997), Felt sold the company to its current owner, Larry Linton, who with Russell has developed the company quickly over the past eight years.

Today, Water Tech Industries has more than 100 active dealerships in the U.S. and abroad.
“We’re just a blip on the screen of those other large, household-name guys, but we’ve managed to provide our dealers with something they can’t find anywhere else,” Russell said.

Like its much larger competitors, Water Tech Industries offers financing options to its dealer partners and provides service, sales and warranty programs that include, “one-on-one relationships, a phone call or a visit in person when needed and all the other things that a large, multinational company simply can’t do effectively,” Russell said.

Unlike many dealer networks, Water Tech Industries does not require its dealers to sell their products exclusively or carry the Water Tech name.

“We have everyone from mom and pop stores to very, very large dealerships selling the Reionator™. The true measure of our success is their success, not our logo on their uniforms,” Russell said.

With that philosophy, Water Tech Industries has been able to document a 25 percent growth in volume for its top 50 dealers in just the first quarter of this year and within five years, Russell projects the company will double their annual volume.

“While we’re selling to people all over the world, we’re primarily known in the western United States,” he said. “Our main goal is to solidify our presence throughout the country over the next few years and continue to build the best systems in the business.”

Conclusion
Water Tech Industries has narrowed its product line in the last few years to focus more closely on the Reionator™ line. Combined with an aggressive marketing campaign for new dealers that includes print advertising, word-of-mouth referrals from other dealers and distributors and entering new markets to recruit dealers of all sizes. The company is actively seeking independent dealerships to represent the Reionator™ product line in the field. From all-encompassing warranties to awards programs for dealers and salespeople, Russell believes Water Tech Industries is a perfect fit for dealerships of all sizes and locations in and outside the United States.

“We have two big advantages to offer potential dealers above and beyond the conventional franchisers,” Russell says. “First, there are no franchising or start-up fees, so you’re already ahead of the game when you start. And second, we provide technical support that is matched by none.”