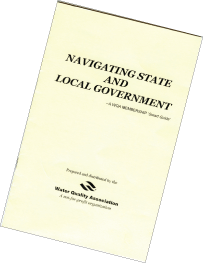 he Texas Water Quality Association (TWQA) was caught flat-footed in the fall of 2001. That’s when we found out about an already-enacted Rule at the state’s environmental agency, the Texas Commission on Environmental Quality (TCEQ). Softeners and reverse osmosis systems were both banned from draining into septic and aerobic waste water treatment systems!

There we were, with no knowledge of why or how this had happened. Not knowing what to do, or how to do it, all we knew was that we had to act. Numerous meetings were set up to find out the reason for the ban and it became clear rather rapidly that the agency had no hard scientific basis for enacting it in the first place.

Despite that, TCEQ was unwilling to work with us to change the legislation to a more reasonable format, even when confronted with sound science refuting their (unfounded) claims of common catastrophic failures of waste treatment systems due to water softener discharges. We appeared to be at an impasse.

As a last resort, TWQA approached a state senator and explained the situation. He was sympathetic to our organization’s cause. Not just because we do business in Texas and contribute statewide to the health of our towns and cities as employers, taxpayers and residents. It was obvious to the senator and to us that the TCEQ rule was capricious; that in fact real science would back up TWQA claims of softeners being only benign contributors to the septic system’s waste stream.

Language was drafted that specified using the industry’s most efficient softeners on septic installations, the now common, but not always used, Demand Initiated Regeneration (DIR) units. This ensured that waste water and regener-ants from softeners are kept to an absolute minimum and thereby proactively addressed some of the agency’s concerns.

The process—in fact, the entire experience!—was an eye-opener for me and for other Texas WQA members as well. We learned firsthand, without a road map, how to work with government and promote our interests, explain our technology and defend our livelihood.
Sure enough, we had an opportunity to draw on that hard-won expertise last year, when New Mexico was considering a ban on softeners discharging into waste water systems. Learning about it ahead of time, we contacted the WQA and began attending the hearings, intent on presenting the real science and showing softeners as benign. (In that instance, we were instrumental in showing that the state’s notice process had failed to meet the legal requirements.)

Another incident occurred in Montana where member Don Dammel, with the help of other water dealers in the state and an expert hydrologist, Marc Spratt, were able to convince governmental authorities there to act reasonably in their proposed regulations. Once again, incorporating the DIR requirement for softeners was a key factor in getting buy-in for an amended and less strict set of regulations; but a key part of the process involved dealing effectively with local health and environmental authorities as well.

Nationally other regions have faced, or are currently facing similar legislation and while I had garnered regional experience in Texas, WQA Public Affairs Director Carlyn Meyer was in a position to see the whole picture. We realized that by putting our newfound knowledge into a handbook for association members, they would be better able to deal with government should the need arise.

We included information from many states by incorporating Joe Harrison’s extensive experience as a provider of expert testimony on the part of the water treatment industry in his role as WQA’s Scientific Liaison and incorporated the advice of Kelley Thompson, legislative watchdog for the association, who also helped us put the material into a publishable form.

The essential premise of the advice is that dealers probably have more potential influence over the political process than they think they do. Contact with local legislators is recommended before a problem occurs (trust me, it’s easier that way!) and advice is given on the best ways to monitor the state’s legislative and rule-making actions.

WQA believes that an informed membership will be better able to intercept and rescind rules that come out of specific dealers’ regional territories. I encourage everyone in the industry to obtain a copy of Navigating State & Local Government—A WQA Membership Smart Guide to effectively deal with the increasing number of legislative threats to the water conditioning industry. Many times these threats arise on the local or state level and don’t readily show up on the larger radar screens maintained by the WQA—it is locally that they are most effectively dealt with.

About the author
Robert W. “Bob” Boerner, a Culligan dealer in San Antonio, Texas, serves on WQA’s Board of Directors and Legislative committee and is the Texas WQA’s Legislative Chair. He can be reached at Culligan Water Conditioning of San Antonio, 1034 Austin Street, San Antonio TX 78208; telephone (210) 226-5344 or email [email protected]. To get your copy of Navigating State & Local Government—A WQA Membership Smart Guide, contact the WQA or your regional chapter today!