Lead contamination of drinking water is one of the most common violations reported to the Safe Drinking Water Information System (SDWIS). Listed and regulated as a priority pollutant by the U.S. EPA, approximately 51 percent of U.S. cities still utilize lead or lead-lined pipes in their drinking water distribution systems. Although amendments to the 1986 Safe Drinking Water Act (SWDA) called for the use of lead-free pipe, solder and flux in new installations or repairs of public water systems and interior plumbing, little has been done to address the existing lead plumbing. Drinking water reportedly accounts for 20 percent of all lead exposure in the United States, but simple procedures can greatly minimize harmful lead exposures.

Lead sources
Sources of lead in the environment are diverse (Table 1) but the primary exposure route is via ingestion or inhalation of dust or paint chips. Atmospheric pollutants from the combustion of leaded gasoline (dramatically reduced now), ore smelting and the burning of fossil fuels are sources of lead in surface water. In groundwater, lead may be picked up from the natural erosion of deposits in soil and rock minerals. In drinking water, the greatest source of lead contamination is corrosion of home plumbing materials. Even brass, bronze and chrome-plated fixtures have a percentage of lead in their composition. In fact, lead-free is defined in the SDWA as solder and flux not containing more than 0.2 percent lead and pipes, pipe fittings and well pumps may not contain more than eight percent lead.

Lead is most often a problem in houses that are very old or very new. Plumbing installed before 1930 was generally constructed of lead. More lead is leached into the water of newer homes due to a lack of scale, beneficial for coating lead solder and preventing leaching. Corrosion, stagnation, temperature and other environmental conditions affect the amount of lead leached into tap water.

Potential health effects
Evidence of lead poisoning has been traced back more than 2,000 years to the Roman Empire. Since the U.S. wartime industrial revolution of the 1940s, a variety of adverse effects have been associated with lead exposures (Table 2). 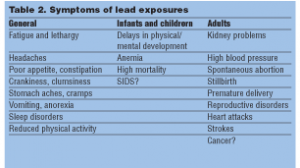 Children, infants and fetuses are the most severely affected populations since they adsorb lead more rapidly than adults because they are still growing and developing. Generally, about 10 percent of the lead consumed is absorbed. Absorbed lead enters the blood and is distributed to soft tissues and bone, where it can accumulate over time. The half-life (time required for 50 percent to be removed) of lead in blood, soft tissue and bone have been estimated to be two to four weeks, four weeks and 27.5 years respectively.

Vulnerable populations
The amount of lead leached from plumbing materials into the drinking water depends on a number of factors including the pH and softness of the water. Highly corrosive waters have a pH below 8.0, are soft (with less than 60 ppm calcium carbonate), are high in dissolved oxygen and are low in dissolved solids and alkalinity (less than 30 ppm) (U.S. EPA, 1988). Concentrations are highest in the morning since the water sits all night, leaching lead from pipes. Lead levels exceeding the action level have been reported in some of the nation’s largest cities: Boston, Chicago, Cleveland, Milwaukee, New York, Seattle and Washington, D.C.

Many schools, daycare centers and medical facilities have their own water supplies. These populations often represent those most at risk due to the immuno-compromised nature of the very young and the chronically ill. Historically, the most common violation of EPA health standards at schools, hospitals and daycare centers, were for lead. During the period of 1993-1995, the problem of lead contamination was undeniable and since then, many water utilities have begun to take measures to minimize the problem such as adding calcium carbonate to harden the water and prevent lead leaching from distribution pipes. Only through continued monitoring can we be assured that the violations of lead levels in water are being reduced.

Monitoring and protection
Lead imparts no taste, odor or color and thus is only detected by qualified personnel and specific laboratory analyses. If the plumbing in your home is made of lead or is less than five years old, or if the water is highly corrosive (evidenced by rust-colored water) lead may be a concern.

No level of lead is considered healthy to ingest, therefore EPA has set zero as the goal of lead exposure in drinking water, but the enforceable action level is 15 ppb. Lead levels in water are monitored at the tap in homes deemed worst case scenarios and controlled by a treatment technique requiring utilities to regulate the corrosiveness of their water. Ninety percent of homes must test below the action level to avoid further water treatment. In 1991 the EPA published the LCR (Lead and Copper Rule), aimed at controlling lead by reducing corrosiveness of water. The Rule is still being modified (U.S. EPA, 2005). 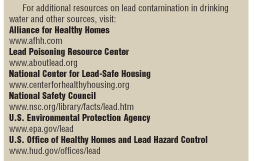 Although recent EPA surveys did not find widespread lead contamination, >15 ppb, throughout the U.S., popular press continues to question data validity. According to a Washington Post article, “Utilities manipulate or withhold test results to ward off regulators.” High lead levels detected in Washington D.C. water supplies and the charge of “creative reporting” by other cities adds fuel to the fire. The only way to know for sure if your water has lead is to have it tested by a state- or EPA-certified laboratory.

Consumers can minimize exposures to waterborne lead by:

Not all of these suggestions are effective; for example, persons living in apartments and high-rise buildings may not be able to flush lead from pipes. With all of the unknowns associated with diverse water supplies and variable contamination sources, POU filtration is recommended as a reliable safeguard against designated contaminants in water. Routine maintenance is vital, however, to ensure a quality product over continued use.