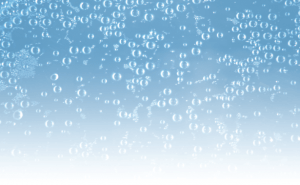 Once upon a time, distillation was a common method of water treatment. Simply put, water is heated to boiling; the vapor is captured and then cooled so it condenses back to liquid water. In the process, many contaminants are left behind since inorganic compounds and large non-volatile organics do not evaporate with the water.

Where is distillation used today? More often in manufacturing, mining and moonshine than in home water treatment. For the past several decades, however, it has had a presence on the bottled water shelves, and there has been renewed consumer interest in having distilled water at home. 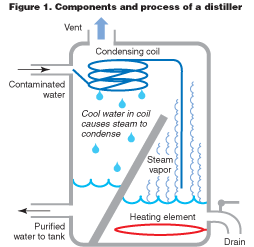 Health boon or risk?
However, there is ongoing controversy regarding its use. Distilled water has been embraced by some alternative health practitioners as the best and purest way to consume water. Counter top distillation units were created to serve this new demand and many dealers report strong sales of same.

Simultaneously, however, there are those who believe drinking distilled water on a regular basis can be extremely dangerous – even deadly (1.) That dispute continues and you’ll find dozens of books at your local library and health food store (and hundreds of websites) on each side of that issue.

The question of whether it is healthy to imbibe distilled water was posed to Andrew Weil, M.D. The well-known author and clinical professor of internal medicine and public health is the founder and director of the Program in Integrative Medicine (PIM) at the University of Arizona in Tucson. Dr. Weil received both his medical degree and his undergraduate AB degree in biology (botany) from Harvard University. He answered as follows:

“First of all, let me review for the record what distilled water is – it’s water that has been turned into steam so its impurities are left behind. The steam is then condensed to make pure water. The process of distillation kills and removes virtually all bacteria, viruses, heavy metals and other organic and inorganic contaminants. Once distilled, the water is as pure as water can reasonably be.

For reasons I don’t understand, any number of myths – some quite extreme – have grown up over the years about distilled water. A quick Internet search today will take you to sites that put forth such views as “distilled water leads to early death.” Nonsense! 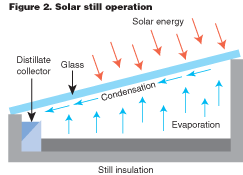 One claim holds that distillation removes all of water’s beneficial minerals. While it’s true that distillation removes minerals as well as various contaminants from water, we don’t know that the human body can readily absorb minerals from water. We get our minerals from food, not water. By one manufacturer’s estimate, you would have to drink 676 eight-ounce glasses of tap water to reach the RDA for calcium alone!

Your question as to whether distilled water leaches minerals out of the body reflects another persistent myth. While pure water helps to remove minerals from the body that cells have eliminated or not used, it does not ‘leach’ out minerals that have become part of your body’s cell structure. As far as acidity goes, distilled water is very close to a neutral pH and has no effect on the body’s acid/base balance whatsoever.
I hope I’ve set your mind at ease. Distilled water not only isn’t dangerous, it’s the purest form of water. It’s also the kind of water I drink.”

Tex/Mex solar water distillation
The El Paso Solar Energy Association (EPSEA) created a demonstration project utilizing solar distillation to improve water quality. People living along the Texas/Mexico border in unincorporated settlements called colonias lack both safe potable water and waste water treatment. Begun experimentally in 1995 with funding from Texas’ State Energy Conservation Office it was immediately successful. In the years since, EPSEA has expanded the project thanks to a Border Pact grant and funding from the U.S. EPA.

The water being distilled in the colonias is usually contaminated and has a high salt content from makeshift septic systems, industrial pollution and the runoff of fertilizers and pesticides. 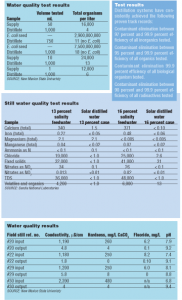 How it works
Solar distillation units here were designed with no moving parts and readily available materials. Individual units – stills – are created from a standard patio replacement glass measuring 34×76”. The basin-type construction should last for decades, according to EPSEA (see illustration 1.)

The still is filled daily with two to three times as much water as will be produced. This is so that the excess, using the built-in overflow outlets, will flush the unit clean each day. During the summer months each still produces three gallons of potable water per day. The rate drops by half in the winter. They are designed to be self-cleaning and do not require a pressurized water supply. Cost of each unit is approximately $200.

Water Purification Comparison
The green bar represents the amount of impurities removed by distillation. The blue bar is reverse osmosis, and the purple bar is charcoal filtering.

Typical Contaminants In The Catagories Above Are:

Conclusion
Distillation is a process that relies on evaporation to purify water, and while debate rages as to the health benefits, it is being used successfully to create safe drinking water. Dealers may wish to expand their offerings with counter top units. Look for UL listed appliances and manufacturer guarantees.