Every day, 280 cubic miles of water evaporates (or transpires) into the atmosphere. That’s a tremendous and virtually untapped resource. Capturing that transpired vapor and returning it to water is what AirWater machines do, without taking away or wasting any of our current fresh water supplies and without adding to the environmental problems of the manufacture, use or abuse of plastic bottles.
Water can be delivered and enjoyed where there is none, with the only requirement being a source of power.
The public demand for these new AirWater systems enables water dealerships to profitably add diversity to their current business. Given the tremendous growth and potential in this new industry already, the financial rewards appear certain.

The origins of AirWater
Researcher Roland Wahlgren, when interviewed by the Ottawa Citizen Newspaper, said, “People have indeed thought about pulling water from the air; hundreds of years ago. The large-scale collection of dew, nature’s own method of recouping water vapor, has long been ascribed to ancient Hebrews and Greeks, who are thought to have arranged stones to collect moisture from condensation as night temperatures fell.”
Feodor Zibold, a Russian engineer, thought that the ancient landmark stone piles around the modern city of Feodesia in Ukraine were the ruins of an enormous dew condenser. He saw them as part of a huge system of collectors that supplied that city’s ancient predecessor, Theodosia, with its water supply. 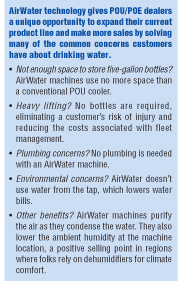 More than 50 years ago, a few forward thinkers knew the value of fresh water for life and pursued it to invention and U.S. patents. First was a man who made his home in Los Angeles, California. That inventor, Bernard Granville, filed his patent on July 20, 1943, the first of its kind for AirWater technologies. Granville was granted patent #2409624 on October 22, 1946 for his technology, known at the time as an Apparatus For Extracting Water From Atmospheric Air.

The next invention of major significance to the AirWater quest was the brainchild of Francis X. Wright of Shaker Heights, Ohio. He was granted patent #3035418 for the Self Contained Water-Supply and Cooling Unit on May 22, 1962. This unit accomplished the cooling and filtration of water vapor and looks very much like the technology today.

Little was done with AirWater over the next few decades and it is only recently that interest in AirWater as a viable alternative water source has been revived. The very sad reality is that many are dying for the lack of potable water, but the advent of AirWater technology and its growing visibility in the United States and abroad, is making that more and more preventable.

Two Canadians began exploring AirWater applications in 1996. Inventor Keith White and his partner Ray Anderson, evolved it to an entire other level after five years of R&D. They then began mass-producing an AirWater unit that today is in its fifth generation. There’s even a tabletop model.

A very common question we receive is: With scientists aware of the availability of water in the air, why has it taken them so long to invent an efficient way of collecting that water from our atmosphere? Most of the world’s leaders in water resources have focused on ground and surface water. However, this preoccupation can (and has) led to political conflict, even war, as countries vie for control of rivers and lakes as their water tables plummet.

How it works
All AirWater machines that I am familiar with pull water from the air via condensation. We do, indeed, have water vapor (moisture) in the air and the intake of that air into the AirWater machines is the first step toward producing clean drinking water. The air passes through a filter, (various methods and/or brands) removing airborne particles such as dust, pollen and dirt. This newly filtered air, which still contains particles of moisture, travels to the condensation system where it is chilled to capture the water.
After capturing water by chilling the air, the temperature is slowly raised releasing this captured moisture and creating water flow, thus allowing this highly oxygenated water to begin a filtration process.
The remaining process varies from company to company, depending on their particular concerns and designs. All seem to use some form of water filtration; most use UV light for the sterilization of waterborne bacteria.

A few common denominators, in my opinion, should be addressed by all AirWater machines, as follows:

As this technology continues, new ways will be found to improve on what is now possible as we retrieve valuable healthy drinking water from the air. Do your own personal due diligence in keeping up with or at least checking out lab results of the product you put your water trust in.

Opportunities and drawbacks
The biggest limitation in current AirWater technology is the decreased production rates over conventional POU systems in certain climate conditions. While several of the machines on the market boast a daily production of 10 gallons, they are all subject to a dramatic cut-off in production rate as humidity and ambient temperature decrease. Each of the companies that appeared at WQA Aquatech 2005 and profiled on these pages provides detailed water production statistics on their respective websites. As will be discussed below, the greatest opportunity for POU/POE dealers today, is to incorporate the AirWater machines into their product offerings, rather than substituting them, to give you customers more choices when they make the decision to switch to safer drinking water.

While the technology has become more and more efficient since its inception, reducing the size of the systems and increasing their production rates, many AirWater manufacturers today have employed alternative water production features in their designs. 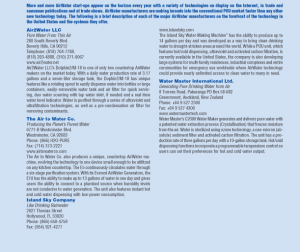 One new approach is a hybrid, the best of both water worlds … AirWater and tap water in a single unit. This is a concept that several AirWater companies are using. Environmentally friendly to the moisture in the air, with a tap water backup for when the humidity and temperature aren’t conducive for generating the quantity of water necessary. Interesting concept, it makes almost any given area one with the ability to use this new technology.

Moving into the future
Today we have no base line for AirWater, not even an approved definition of the recently-coined word itself, but in the not so distant time to come, AirWater will be an approved word and an everyday accepted appliance in our lives. We have no more water in our world today than yesterday, but we do have more demands than ever on it. We must have fresh water, without it, life itself cannot exist.

In the 2004 Annual Water Quality Association Convention there was only one AirWater Company, Planets Purest Water. At the time, the company’s CEO Robin Larson, predicted that AirWater machines would be the next major household appliance. At this year’s WQA Aquatech 2005 in Las Vegas, Nevada, four AirWater companies showcased their own water generators. I believe the addition of more and more AirWater pioneers is a trend not likely to subside. With the incredible need for fresh clean drinking water on the rise and given the income such products can bring to established dealers, it should be a welcomed addition to the water industry.

For POU/POE dealers, this new niche in the marketplace provides a unique opportunity to expand up their current product offerings and sell to host of new customers who may be hesitant about conventional bottled water and other drinking water systems. AirWater machines give the average dealer a way to solicit customers that may have concerns about lifting their own five-gallon water bottles, a lack of space for water bottle storage, concerns about wasted water in conventional reverse osmosis systems, the costs associated with treatment at the tap and a host of other concerns.

Moreover, as AirWater continues to gain acceptance as a viable solution to the solving critical water shortages in the Third World and other places where the climate is conducive to large-scale production but access to potable water is currently limited, the environmentally conscious here in the United States will see residential AirWater machines as a “greener” alternative.

For these and many other reasons, the time has come for the water treatment industry as a whole to take a good look at AirWater technology and begin incorporating it into their lineup of conventional bottled water coolers, under-sink RO systems and POU coolers.

About the author
Darryl D. Clayman, a long time newspaper executive is now media and advertising director for Planet’s Purest Water, a Southern California-based company whom has been leading the AirWater industry since 1996. He can be reached via email at darryl@airtowatercompany.com.

AirWater technology gives POU/POE dealers a unique opportunity to expand their current product line and make more sales by solving many of the common concerns customers have about drinking water.