Pure Water Doesn’t Have to Be Bland 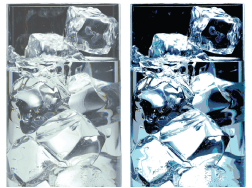 Introduction
Consumers have many choices when it comes to drinking water. The large majority opt for bottled water if they want something other than their tap water and they are willing to pay a high premium for it because it allows them to suit their taste. They may select their favorite from a wide range of available bottled waters, from deionized water to mineral water, with a host of permutations in between. As an alternative to bottled water, some people install a point of use (POU) drinking water system, typically at the kitchen sink. But even though POU systems save consumers money, POU sales represent a small fraction of the $7 billion annual U.S. market for drinking water. One big reason is that in filtering out contaminants, POU systems also tend to filter out flavor.

One solution to consumer demand for drinking water choice is the patent-pending dial on a new POU drinking water system through which the consumer can change their drinking water’s taste by altering its level of total dissolved solids (TDS). Using this system, consumers can select one taste for drinking, another for coffee and another still for different family members. With this technology, water no longer has to be bland.

In this article, we will begin with a brief overview of conventional ion exchange as a backdrop for a description of Electrochemically Assisted Ion Exchange (EAIE) and how it works. We’ll also explore several advantages of this new technology for residential and commercial drinking water applications, including taste selection, reduced waste water and improved contaminant removal.

Conventional ion exchange—softening and deionization
Engineers and water treatment professionals have tried for 50 years to combine the ion exchange process with electrical regeneration to create a clean, smart, automated deionization technology. Ion exchange is coveted for its selectivity and effectiveness on dilute solutions and electricity offers the potential to regenerate ion exchange materials into the acid and base forms necessary for deionization. To effectively describe EAIE technology, it helps to review the operation of the water softener and the conventional ion exchange deionizer. Water softeners do not reduce total dissolved solids (TDS); rather, they use cation exchange resin beads to selectively replace hard ions such as calcium with soft ions (usually sodium). The water softening reaction is found in Reaction 1.

The water softener has a limited capacity for hard ions, however. For continued use, the cation resin must be regenerated with salt (sodium chloride) to prepare the resin for further hardness removal as shown in Reaction 2. Any homeowner, water treatment professional, or waste treatment utility engineer will readily admit that this chemical regeneration with salt is the major drawback of the water softening process because of the hassle, expense and (in some cases) environmental burden of purchasing, hauling, storing, handling and disposing of salt.

Now let’s take a quick look at the conventional ion exchange deionization process. This employs cation and anion exchange resin beads, as well as acids and caustics (such as sodium hydroxide) for regeneration. In the deionization step, dissolved salts are literally replaced by water. Using sodium chloride removal from solution as an example, this deionization process is summarized in Reactions 3, 4 and 5.

The acid and hydroxide released by the cation and anion exchange resins as they absorb sodium and chloride, respectively, combine in the product water to form…water.

As in a water softener, the ion exchange resins require frequent regeneration if they are to be reused. The really bad news is that for deionization, the cation resin must be regenerated with hydrochloric or sulfuric acid and the anion resin with sodium hydroxide, all hazardous materials that require special equipment and considerable training. Because of these hazards, the regeneration process is typically only performed in industrial settings.
In residential and commercial POU applications for TDS reduction, reverse osmosis (RO) is far more common and very often employed in commercial point of entry (POE) industrial and municipal deionization applications, often as pre-treatment for conventional ion exchange deionizers.

How Electrochemically Assisted Ion Exchange works
The technology patent, Electrochemically Assisted Ion Exchange, was granted in 1998 (USPTO 5,788,826) to Pionetics Corporation. This very broad patent describes devices and methods for removing or replacing ions in solution (deionization and regeneration steps). The devices are relatively simple, comprised of a special type of ion exchange membrane, called a water-splitting membrane, positioned between two electrodes. The ion exchange membrane is in a replaceable, cylindrical cartridge, while the electrodes are a permanent part of the housing. A power supply, controller, valve, conductivity sensor and flow sensor round out the list of necessary system components. 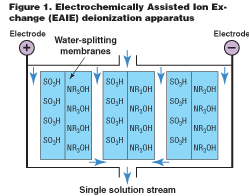 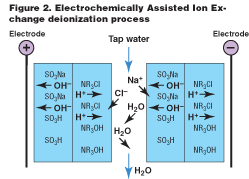 (Reactions 3-5 again apply to this process). The difference between the conventional ion exchange deionization and the EAIE process is that for the latter, the ion exchange materials are in the form of water-splitting membranes and a voltage is applied during the deionization step to accelerate ion removal (ions move faster in the electric field).

When the system’s capacity for ions is exhausted, a regeneration step is required. As illustrated in Figure 3, one initiates the water-splitting reaction for which the ion exchange membranes are named by simply reversing the voltage polarity. At the 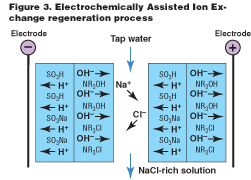 This method is not electrodeioniza-tion (EDI), an interesting process for producing ultrapure water. EDI is a continuous, electrodialysis process comprising ion exchange beads in product water chambers. The EDI device is not constructed with water-splitting membranes, but rather with alternating cation and anion exchange membrane layers to form product and waste channels. EDI designs are plate-and-frame constructions that do not lend themselves to replaceable cartridges and the feed water for EDI must be virtually free of hardness ions and is typically of low TDS.

The benefits of EAIE
There are a variety of benefits associated with this new technology that bring previously impossible flexibility and reliability to the residential POU marketplace. They include:

High flow rate—The water-splitting membranes can deionize water at high flow rates, eliminating the need for a storage tank in POU applications. Because flow rates are a function of cell size and number, more cells equates to an ever-increasing flow rate for commercial applications.
Rapid chemical-free regeneration—A general design rule with this technology—since it is a batch process—provides one back-up cell to continue supplying service water while another cell is in regeneration. Regeneration of a cell occurs in about 10 minutes by combining the efficient use of water and power during this step.
Selectable taste—This feature eliminates the drawback of a POU system when compared with bottled water. Rather than marketing a drinking water product based upon its ability to remove a maximum fraction of dissolved solids, the patent-pending feature allows water systems resellers to offer selectable taste to POU customers for the first time through the control of TDS. This is possible because electricity is used during the process to accelerate ion extraction. As power is reduced or increased, the product water TDS is increased or decreased, respectively.

Why the choice? People are different! For drinking water, some people prefer maximum TDS reduction (even distilled water). In the United States, 60 ppm is a common preference, while Europeans tend to appreciate higher TDS levels and mineral water is quite popular. Additionally, the best TDS level for

Drinking water may not be what one would chose for making coffee, orange juice or preparing dinner. With control, the customer may set the dial for 60 ppm for drinking water, and reset it for 150 ppm to prepare coffee and then return the dial to the drinking water setting. This also allows the customer to address recent concerns about the health benefits of minerals in water (particularly calcium and magnesium), since it lets the customer decide whether or not to increase the water’s mineral content.

The range of priority contaminants that can be selectively removed by ion exchange increases when regenerating with acids and bases rather than with sodium chloride. Thus, the EAIE technology removes both arsenic V and arsenic III because the anion exchange resin is in the hydroxide form rather than in the chloride form. Ion exchange materials also extract weak bases such as ammonia.

Conclusion
The conventional approach to TDS reduction is that more is better. This assumption is entrenched because the available technologies—reverse osmosis and distillation—do not lend themselves to adjustment or control of product water TDS. But more TDS reduction is not always better. People everywhere have individual tastes and these tastes differ depending on whether the water is for drinking, coffee or cooking. Electrically Regenerated Ion Exchange technology provides the customer with control of their water’s taste. In addition, EAIE technology saves water wasted through reverse osmosis, provides high flow rates to eliminate the storage tank, delivers excellent selectivity for nitrates and perchlorate and removes arsenic III as well as V. EAIE technology gives consumers real choices in the taste of purified water from a POU system while delivering superior convenience and lower costs when compared with bottled water.

About the author
Eric Nyberg received his Ph.D. in inorganic chemistry from the University of
Illinois, Champaign, in 1982. He worked at Raychem Corporation for 22 years on a wide variety of product development projects. Dr. Nyberg is the Founder of Pionetics Corporation and now serves as its President and Chief Technical Officer.

Pionetics was founded in 1995 to develop and commercialize EAIE technology, branded as LINX® technology, a TDS reduction technology patented in 1998 based upon the fundamentals of Electrically Regenerated Ion Exchange.

For additional information regarding the LINX 120 system, contact Pionetics at (650) 551-0250, Information@pionetics.com or online at www.pionetics.com