Fillmore CA One Year Later: Life After A Ban on Water Softeners 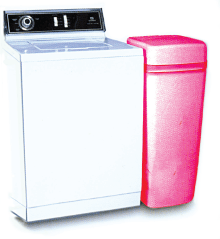 Twelve months after water softeners were banned here in Fillmore, at the heart of the Santa Clara River Valley, things haven’t actually worked out according to predictions. Chloride levels remain remarkably constant in the river despite the legislation. This is most likely due to the temporary lull in home building.

The water treatment and purification industry opposed the ban, instead suggesting a program of phased-out replacement of older, less efficient softeners which had worked successfully in the San Francisco Bay area. That proposal was not considered an option in the din of those clamoring for the death of softeners.

In an odd confluence, several diverse groups not normally on the same side of any issue, let alone any issue involving water, found themselves united against water softeners – agricultural users, environmentalists and government officials.

The farm folks say that softeners must go because they cause higher chloride levels in the water they use for irrigation and those higher chloride levels would damage purportedly salt-sensitive strawberry and avocado crops raised on a large scale in the Santa Clara River Valley and the Oxnard plain. They claim that home water softeners in the Santa Clarita area discharge up to 20 pounds of salt into the sewer system each week, per unit.

In 1999, The Los Angeles Regional Water Quality Board estimated that agricultural activities contribute between 43,000 and 100,000 pounds per day of chloride to the Santa Clara River watershed. Ironically, this very significant loading source (i.e., agriculture) is also the beneficial use sought to be protected with the chloride objective.

Environmentalists fear for the health of the Santa Clara River and that of the entire Valley. Enhanced sodium levels, which they too believe are the result of residential water softeners, harm the plants and animals native to the river ecosystem. They have also been quoted citing the 20-pounds-of-salt-per-week-per-softener discharge number.

Government representatives are faced with federal mandates for water treatment, an ever-increasing list of standards and aging infrastructures, notably wastewater treatment plants. Many of those plants are never built with the ability to reduce chloride levels. It seems logical to assume that no politician wants to have the costs of a new treatment plant and the resulting raise in sewer taxes and fees happen under their watch.

Fillmore is a small community of 15,000 people with a number of unique problems – and just as many unique possibilities. Low-income households comprise approximately 70 percent of our population – many of them working in agricultural jobs . Seeing the potential to make a difference, I became active in civic affairs and won a seat on the City Council. I am currently also the Mayor pro tem and and a co-owner of GoWater, Inc, a Kinetico dealership based in Santa Barbara, Calif.

The majority of people with water softeners here in Fillmore bought them at big box stores in the surrounding regions (we’re not large enough to have a big box store to call our own). Salt was carried by the supermarket here in town. I’d hazard a guess that those softening systems were often undersized because a smaller unit cost less to purchase and I’d further guess that as a result, there might have been enhanced salt use to try and up performance. Yet softeners were set upon as source of contamination out of scale with our size or actual impact: Fillmore contribuites about 450 pounds of salts a day compared to the estimated 43,000 to 100,000 added by agriculture.

I rescued myself from voting on any action that directly involved water softeners as I have an obvious conflict of interest being a water systems dealer; however, I was active in each and every debate, discussion and meeting. I stressed the WQA position of phasing out old softeners old softeners and the additional cost and limitations of using exchange tanks. We have extremely hard water hereabouts, 35 grains which would cost a family of 4 about $50 to $70 dollars per month.

To assist in reducing chloride, the local local market was asked to discontinue carrying salt. For the supermarket manager, it was an easy accommodation. Those 40-pound bags weren’t being sold and they took up a lot of space in the small store. Most people didn’t purchase their salt in town anyway; big box stores sell it for less.

Agriculture, of course, is a sacred cow in California because of the amount of money it generates for the entire economy. Agriculture interests have a great deal of power here, and they have effectively prevented any discussion of fertilizers as a source of chloride in wastewater. I’m sure that some crops are extremely intolerant of sodium. I am just as sure that some crops thrive with higher salinity levels. I’m endlessly surprised that there is no science proving any of their concerns. The Ventura County Board of Supervisors supported the recently formed farmers’ coalition and asked the Los Angeles Regional Water Quality Control Board to halt their plan to temporally raise allowable chloride levels. The Los Angeles Sanitation District of owns the treatment plants at Valencia and Saugus. Since the mid-1990s, state water regulations limited chloride discharges to 100 milligrams per liter; state officials are now considering raising that amount to 230 milligrams as part of a multi-year study program. The Districts’ interest lies in avoiding the costs of chloride removal technologies. The Water Board approved the higher limits on May 6 despite those objections, stating that the change was necessary to make the plants’ permits consistent with federal chloride limits.

It is worth noting that two of the three cities and towns along the Santa Clara (Valencia, Fillmore, and Santa Paula) have banned softeners and Santa Paula is considering an identical ban. The remaining cities in Ventura County generally prohibit commercial softeners and in several of them, the building departments actively discourage builders from providing water softening plumbing for homes.

What this will mean to my business remains to be seen. As softeners come under attack because of the lobbying efforts of agricultural interests and environmentalists, I think other dealers will find themselves in the same position as me – questioning the future profitability of their family business.

As an elected official, I’m concerned about the impact of increasing regulation on wastewater treatment plants without a sound scientific basis and forcing communities to spend millions of dollars for questionable reasons. My community will see their sewer rates jump from the lowest in the area to the highest. I’m also very concerned that my city may force pre – softener ban softeners to be removed because of inflexible State regulations.

As a homeowner, I’m worried that if I am forced to disconnect my State of California efficiency compliant softener, I’ll have no choice other than subscribe to a exchange service which will increase my soft water cost more than eight fold.

A handful of local residents have banned together to monitor anti-softener activities and spread the word to other softener owners. Without the unlimited resources of the interests that want softeners eliminated, they have launched a web site and provide current information on local issues. You can visit it at: http://www.saveoursofteners.com.

I have chosen to try and make people see reason, use real science and approach the future with sound practices governing our use of the most precious of our resources, drinking water. I will continue to do so and urge you to join me in that endeavor no matter where you reside. Much similar legislation is being contemplated across the country. Speak out – loud and often!

About the author
Ken Smedley is a Kinnetico dealer (visit his dealership’s website at ) and a member of the Board of the Pacific Water Quality Association…and a member of the City Council and the Mayor pro tem of the City of Fillmore, “The Last, Best Small Town in Southern California.” Fillmore has a rich heritage, starting in the late 1800s with the arrival of the railroad and the development of the surrounding river valley into one of the most productive citrus producing areas of the world. Today, Fillmore (population approximately 13,000) continues to celebrate this heritage with its historic downtown, steam train rides, winery and a number of family-oriented, old-fashioned festivals.