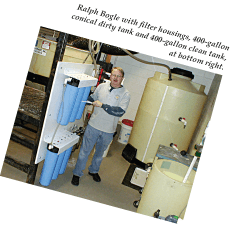 Introduction
The Colorado Department of Public Health and Environment classifies the University of Colorado at Boulder (UCB) as a large quantity generator of hazardous wastes. In fiscal year 2003/2004, UCB generated 82,600 liters and/or kilograms of hazardous wastes from 400 different locations of full-time teaching, research laboratories and educational support facilities. Cost and compliance are the primary factors driving to become more efficient in managing this volume of waste.

Prior to June 2000, UCB had collected, managed and shipped all wastes off campus, typically by employing large vendors to come on site as contract laborers. However, it became apparent this outsourcing of waste disposal was not going to be cost effective for the university. A new strategy was established to reduce the costs of contractor services and the amount of waste requiring offsite disposal.

The challenge
The waste streams come predominately from teaching facilities. These classroom environments and research labs teach/employ a student workforce that is always in transition. This dynamic workforce plus other variables constantly change the waste stream composition.

Cross contamination often occurs during the waste collection process. Students in a hurry to keep up with their schedules may not wait to access the correct container for waste collection, instead opting for the first available carboy to dump their experiment waste. This potential for error exists regardless of training, safeguards and redundant mechanisms of control.

The fluctuating metals content represents the biggest hurdle to overcome. Unlike a manufacturing facility that generates a somewhat consistent characteristic effluent, a university has potentially hundreds of small quantity generators. Mandatory safety training, reduction of scale, computer modeling and alternative reagents are all used to reduce the volumes but the key factor is the size of the campus. UCB has 47 buildings that generate hazardous waste plus U.S. government research facilities, including the Institute for Arctic and Alpine Research, National Oceanic and Atmospheric Administration and United States Geological Survey, that lease lab space from UCB making the number of variables extensive.

Given this erratic waste stream component structure a resolution had to be devised that was equally flexible and durable. UCB Department of Environmental Health & Safety (EH&S) in conjunction with a group of consulting engineers developed a three-part system targeting the largest waste streams treatable without major modification to the EH&S building and with minimal permitting issues.

The three systems identified were ion exchange of silver metal-bearing photographic process wastes, trace organic oxidation with ozone/ultraviolet light and neutralization of acids/bases followed by polishing with selective ion exchange filters. Each of the waste streams targeted for treatment were aqueous and contained only trace (less than one percent by volume according to EH&S) levels of contamination.

The money to be saved was a potential average of $300 per 55-gallon drum (shipping, labor, materials not included; prices vary by waste characteristic). The aqueous wastes would be treated onsite and then managed as industrial wastewater. The waste included a variety of compounds formed from the metallic elements listed in Table 1.

These 11 metals are of particular interest since they are specifically regulated by the city.*

It became clear that with minimal effort the neutralization of acidic and basic wastes in conjunction with selective ion exchange resin cartridges could be expanded for further cost recovery and waste reduction.

By default pH adjustment to the neutral range will cause many metal hydroxides to precipitate out of solution. Metal hydroxides have a logarithmic reduction in solubility as the pH approaches 9.5. These solids need to be removed via filtration before ion exchange can be used. Once filtered, the resulting clear liquid contains only dissolved ions that can be removed via ion exchange.

The design approach of the batch system was to selectively remove the undesired contaminants to very low levels. The non-regulated salts contained in the waste stream greatly outnumber the levels of the wastes trying to be removed. Specialized ion exchangers remove only the metals and allow the non-hazardous products to pass through.

The dissolved metals present in the filtered waste stream can be classified into cations and anions. Cations are metals having positive charges, which can be removed using cation exchange resins. However many metals do not exist as stand-alone cations.

Some cations react with chemicals in the water to form anionic complexes.

In a chemical complex the metal is still present but as part of a larger molecule with an overall negative charge. Anionic metal complexes are normally well removed by anion exchange resins. Table 2 lists the targeted contaminants, their ionic form and the removal media.

Commonly called chelating resins, the iminodiacetic functionality of a weak acid macroporous cation resin, have the unique ability to remove divalent metals from high TDS matrices. The resin will not remove traditional divalent cations such as calcium and magnesium, which can be present in large quantities. High levels of sodium and other monovalent cations also do not interfere with the operation of the chelating resins.

Once the cationic metals are removed, specific resin cartridges were chosen to target undesirable anions and anionic metal complexes. Silver and chrome are two metals that form well known anionic complexes. The last contaminant is molybdenum which is normally a stand alone anion.

Silver is segregated by application into two different waste streams. Both are treated by ion exchange. Photographic silver is specifically and categorically regulated as a separate waste stream with its own limits. A chemical present in the developer solution forms a very stable complex with the silver called silver thiosulfate. Strong base gel anion resins have a very high affinity for this complex.

The silver in the neutralization system may be present from biological work with local plant life, mine drainage & soils, etc. These silver compounds can be present as both cations and/or anionic complexes. The chelating cartridges will remove any cationic silver while the anion cartridges will capture the complexed silver.

Chrome can be present as a trivalent (+3) cation or a hexavalent cation (+6) that forms a stable anionic complex with oxygen. The prevalent form of the chrome at a neutral pH is the anionic complex. Hex chrome is commonly used in water treatment and plating. Hex chrome is well removed by anion exchange, but a specialty weak base anion resin was chosen for its extremely high capacity.

Once the appropriate resins were identified, the next concern was how to package them. Since waste was processed a few times each year, using tanks of resin seemed excessive; resin packed in 4.5-by-20-inch canisters that would fit standard polypropylene filter housings looked more appropriate. The ideal flow was calculated to be 0.25 gpm, and it was determined that using multiple resin cartridges in series would increase removal rates. A 5µ nominal sediment filter followed by a carbon block cartridge was specified for prefiltration.

EH&S determined that a system would be ideally mounted on the side of a platform. FilterSource mounted a 48-by-48-inch board with two standard filter housings for the sediment and carbon filters, followed by six larger filter housings to hold the resin cartridges. A small electric diaphragm pump was selected to provide 0.25 gpm at 40 psi. Since 300+ gallon batches would require more than 20 hours to process, a timer was installed to cycle the pump so it wouldn’t overheat. A flow restrictor was inserted in the line to insure proper flow wasn’t exceeded. Reinforced flexible hoses were used between the system and the dirty/clean tanks.

A first batch was set to run. The pH was adjusted and the batch processed. A sample of the processed water was sent for analysis, which showed that all metals were found to be within limits set by the city. The batch was successfully discharged to the POTW.

The final process
EH&S is notified when waste is ready to collect via submission of a container tracking form. This waste might be as small as 10 ml or as large as 55 gallons. Containers are collected and consolidated into 55-gallon drums of like waste under a vented hood. Treatable waste is marked and moved into the treatment room.

Most waste is acidic; a comparable amount of base waste must be processed to neutralize the pH. Acids and bases are transferred separately into a 400-gallon conical polypropylene “dirty” tank via dual metering pumps. A pH/OPR controller monitors the pH of the waste in the tank, which is kept agitated by a mixer.

Once 325-350 gallons have been neutralized, contents are sampled and analyzed for trace metals using ICP protocol. Based on the metals present, the operator selects which ion-specific cartridges will be installed in the filter housings and in which sequence. The solution is run through the filtration system in a single pass, ending up in a 400-gallon “clean” storage tank. A sample of the clean waste is sent for analysis; if metals are within acceptable levels the waste is sent to the POTW.

If, however, one or more metals are still too high (indicating the cartridge was exhausted during the run), a new cartridge is installed and the waste rerun through the system. It is retested and then sent to the POTW.

The results
Operational since June 2000, the entire treatment facility and its processes reduced hazardous waste shipped offsite in FY 03-04 by 27.6 percent. Treatment had an immediate impact on disposal cost.

Starting with the first batches of waste treated, the results have remained extremely promising. Primary metals have all been reduced, some better than others. Cationic metals targeted by the chelating ion exchangers have been reduced to between non-detect and 440 ppb (parts per billion).

The complexed metals, silver and chrome were also effectively removed. Silver was reduced to 250 ppb while chrome was detected at 240 ppb. Molybdenum appears to be the only problematic contaminant. Even after the treatment system it continues to be present in the ppm (part per million) range.

In the end the molybdenum concentrations are still low enough to meet the discharge requirement of the POTW. The system continues to be used and a set of cartridges will last several batches. Cartridge order and rotation give the system the flexibility it needs to address new or elevated levels of individual contaminants.

The operating costs and convenience of the system are a significant improvement over the previous method of hauling and disposal. Environmental liability is limited and, most importantly, the university and the city are happy.

About the authors
Larry Gottlieb is Vice President of the ARIES FilterWorks Division of ResinTech Inc., a manufacturer of water purification systems, deionization cartridges and clean steam sample coolers. He’s also the Vice President of the ACM Company, a ResinTech subsidiary that specializes in waste water treatment using ion exchange. Gottlieb has over 10 years of experience in ion exchange.

Ralph Bogle is a physical engineering research scientist in the Environmental Health and Safety Department at the University of Colorado at Boulder. Licensed and certified by the State of Colorado as an Industrial Wastewater Plant Operator, he is a contractor with Laidlaw Environmental Services.

The authors acknowledge the work of Dick Chmielewski as instrumental to this project. Chmielewski has more than 15 years experience in the water treatment industry and is currently West Coast Sales Manager for ResinTech Inc., based in San Diego, CA. He received a B.S. in chemical engineering from the New Jersey Institute of Technology and an M.S. in chemical engineering from the University of California at Berkeley.