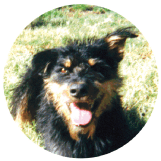 POU water for pets?
Have you ever witnessed Fido choosing the toilet bowl instead of the accessible, fresh, clean water in his dish? Obviously pets aren’t versed on the current microbial research. Seriously though, is it necessary to serve treated (i.e., chlorinated or POU filtered) water to pets and other animals? Putting this subject in perspective is the fact that the question is still heavily debated for human populations. But is it possible that improving the living conditions of animals, including cleaner water supplies, translates to a health benefit for man’s best friend?

It’s true that domestic pets and agricultural or wild animals can be infected with the same pathogenic microbes as humans. These infections can result in overt disease or the animal may become a carrier of the microbe (experience no adverse effects but capable of passing the infection to other animal carriers, insect vectors or humans).
Listed below are some common household pets and the variety of microbial infections they may be subject to- many of which are also risks to humans (Centers for Disease Control and Prevention. www.cdc.gov).

Avian infections
Pet birds may be infected with Chlamydia psittaci, causing a bacterial disease known as psittacosis; Cryptococcus, the causative agent of a fungal disease and Salmonella, a bacterium causing diarrhea, vomiting and fever in humans. Salmonella is a major concern in the food-borne route of disease associated primarily with agricultural products (poultry, eggs and related products). It can also be transmitted by the waterborne route. Wild birds, including ducks, geese and pigeons, are known to carry human pathogens. Irrigation and landscape waters, canals or constructed wetlands fed from waste water treatment plant effluents may be an exposure source of sewage-related waterborne pathogens to birds. Studies have shown that wild birds are commonly infected with human pathogenic protozoa (i.e., Cryptosporidia) and rates of Campylobacter jejuni bacterial infections are known to be higher in geographical regions with increased poultry density.

Feline infections
Cats may be infected with Campylo-bacter, Bartonella henselae (cat scratch fever), Coxiella burnetti, Cryptosporidium, Dipylidium (tapeworm), hookworm, ringworm, rabies, Leptospira, Yersenia pestis (plague), Toxocara (roundworm) and Toxoplasma. Campylobacter is an enteric bacteria associated with waterborne and foodborne illness in humans. Pregnant women are warned against exposure to feline fecal matter due to the potential presence of Toxoplasma, a protozoa that can cause developmental problems in unborn fetuses.

Canine infections
Dog infections include Brucella canis, Campylobacter, Cryptosporidium, Dipylidium, Giardia, Leishmania, Leptospira, Salmonella, rabies, hookworm, ringworm, Rocky Mountain Spotted Fever, Toxocara and Dipylidium. While some of these are mostly problematic for the dog, causing liver and kidney problems or even flu-like symptoms, others, as discussed previously, are zoonotic, transmitting disease to humans.

Others
Although you would have to be pretty creative to catch a disease from your fish, it’s reportedly possible. Amphibians, reptiles and so-called “pocket pets” (i.e., gerbils, hamsters, rodents, etc.), on the other hand, have been frequently associated with Salmonella infections.

Pet-acquired infections are rare; however, up to 75 percent of emerging pathogens are thought to be of zoonotic origin. Of potential concern are animal viruses that are genetically similar to human viral strains, including rotavi-ruses, picornaviruses, enteroviruses, coronaviruses, caliciviruses, hepatitis E virus and others. Did these human viral pathogens cross the species barrier from animals to humans? What environmental factors are involved? This cross-species phenomenon has been noted with primate, equine and avian viruses sometimes resulting in untreatable and fatal infections.

We know that animals play a role in the cyclic transmission of harmful microbes and researchers have considered the dual role that water might play. Clearly water is one potential exposure site, due to the deposition of animal fecal matter, but what role does water play in the original infection of the animal, or in the disease transfer between animals?
We know that animals can contract pathogenic infections from water, including Giardia, Cryptosporidium and Salmonella. Therefore, back to our original question: would animals benefit from cleaner water supplies?

Risks to animals
In recent years, several studies have focused on the drinking water of farm animals, including chickens and cattle. Enteric bacteria (i.e., Salmonella and Campylobacter) were isolated from poultry drinking water and E. coli O157:H7 from water and sediment in cattle water troughs. Both were shown to contribute to the spread of these pathogens to other animals. While this study suggested that drinking water treatment at the point of use might prevent the spread of these microbes throughout the animal population, such interventions did not prove to have a significant impact. Some of the primary explanations given were that the efficacy of the chlorine disinfectant may not have been sufficient due to interferences from high levels of organics and biofilm formation. In other words, purified water is not easily obtained in the field. Additionally, other routes of transmission such as the fecal-oral route were substantial contributors.

Risks to the immunocompromised
There are relatively few reports of disease outbreaks associated with household pets, and the benefits of pet ownership far outweigh potential risks of microbial infections. Having said that, keep in mind that sensitive or immuno-compromised populations (children <5, pregnant women, HIV patients, organ transplant recipients, etc.) should minimize their risk of zoonotic infections. The CDC recommends that pregnant women not handle cat feces due to risks of toxoplasmosis and parents of children under five years of age are advised not to purchase pet chicks, ducklings or reptiles due to risks of salmonellosis.

Conclusion
In conclusion, pets should be encouraged to consume a fresh water source given that consumption of contaminated or stagnant water can result in harmful microbial infections. Waters high in algal growth should be a concern due to the production of toxic metabolites. Microcystis algae bloom in ponds and lakes, producing toxins that are deadly to domestic farm animals and dogs. Fish and other aquatic species must be supplied water that is free of harmful chlorine residuals. The general rule is, if they have gills, the water should be free of chlorine disinfectant. Thus, if you are served by a disinfectant treated water source, you will be required to purchase purified bottled water or utilize a POU filter designed for chlorine removal. Otherwise, little data is available documenting adverse health effects to pets consuming potable water and studies of agriculturally important animals have shown advanced water treatment interventions to be futile with regard to disease prevention.