Industrial, commercial and personal practices produce wastes every day that are hazardous to human and environmental health. Improper management of wastes can lead to contamination of air, soil and water. Waste water contamination of drinking water is a concern in the United States where despite increasing regulatory control and hazard awareness, organic compounds, chemicals and microbes introduced into the ecosystem frequently impact the quality of the nation’s watersheds.

Waste water Constituents
A multitude of pollutants are produced in the U. S. from both domestic and industrial processes as well as hard-to-control sources including storm water and agricultural runoff. Domestic wastes include water from laundry and bathing (gray water), toilet flushes (black water) or food products (ground up by in-sink disposals). Household wastes commonly contain hazards such as microbial pathogens (viruses, bacteria or protozoa), excessive nitrates (detergents) or other toxic compounds common like motor oil, paint products, pesticides and household cleaners.

Industrial wastes are often similar to those created domestically but tend to be more concentrated in specific pollutants such as metals, solvents, or pesticides. In addition to accountable industries, approximately 33,000 abandoned hazardous waste sites have been identified in America with approximately 42 percent known to impact groundwater supplies. Agricultural processes often produce waste water with toxic levels of typically beneficial nutrients such as nitrogen and phosphorous. Furthermore, 1.1 billion lbs. of pesticides are produced each year, of which 77 percent are applied to agricultural land. There are nearly a half a million animal feeding operations in the U.S., contributing to significant nutrient overloads and pathogen introductions into watersheds.

Domestic and industrial wastes are often considered point sources where the water is collected via pipes, ditches and sewers. For these pollution sources treatment is controlled at a discrete point, whether at a municipal treatment plant or a decentralized system such as a septic system. More difficult is the control of nonpoint source contamination, where pollutants from land runoff, erosion, rainfall, etc. cannot be collected but rather are dispersed directly into environmental watersheds. Excessive rainfall and snowmelt can exceed treatment plant limits, resulting in storm water sewer overflows, sanitary sewer overflows and combined sewer overflows, causing significant nonpoint source contamination events. In addition to sewage-related microbial pathogens, storm water runoff is frequently contaminated with agricultural pesticides and fertilizers, oil and gasoline from roadways and a host of other toxic pollutants. In some situations, storm water runoff contains higher levels of toxicants than raw sewage. (An unsettling thought if you remember when you used to play in storm water catch basins as a kid!)

Where does it go from here?
Each person in the U.S. produces more than 200 gallons of waste water every day. Where does all this waste end up? As of 2000, the EPA reports that there are approximately 16,255 municipal water treatment facilities in operation in the United States, treating more than 40 billion gallons of waste water per day. Current technology allows for the recycling of municipal waste water to potable (drinking) water quality – although this concept is (pardon the pun!) difficult for many to swallow.

Instead, appropriately treated waste water effluent is primarily utilized for land irrigation (hence all the “do not drink” signs decorating golf courses), as recharge to supplement diminishing groundwater aquifers, or directly discharged into rivers, oceans or another receiving body of water. Sewage sludge, now commonly referred to as biosolids, is the solid component of waste water. Biosolids have many beneficial applications, including crop fertilization and land reclamation. Today, approximately 50 percent of municipal biosolids are applied to U.S. lands.

For those not connected to municipal sewer lines, decentralized treatment facilities, better known as onsite septic systems, are used to collect, treat and disperse waste water from private homes, businesses or even small communities. Septic systems treat domestic waste in approximately 25 percent of the homes in the United States. The rate of septic system use in new home construction is 33 percent.

Although voluntary guidelines for the maintenance and general management of onsite waste water treatment systems have been published by the EPA, additional regulations are expected given the known prevalence of improperly managed systems affecting public and environmental health. Recent studies have targeted onsite treatment systems as major contributors to groundwater and surface water contamination. Up to 42 percent of public drinking water wells and 8 percent of homeowner wells tested positive for human virus contamination (see On Tap, December 2004, WC&P). 1995 Census data confirms that >10 percent of all systems backup into homes or have waste water emerging on the surface of the soil. The majority of septic systems in the U.S. were installed over 30 years ago, when few rules or guidelines were implemented or enforced.

Part of the difficulty in managing septic systems is the wide variability in maintenance requirements, considering that the amount of waste generated changes in accordance with the type of waste discharged, the number of users, the solid to liquid ratio, etc. Suggested maintenance requires an inspection every three years, with a need to pump every three to five years, depending on use characteristics. Inspectors will examine, among other things, levels of liquid and solid wastes and leach field efficacy. Treatment is most effective by slow filtration through the subsurface soil environment; however, soil variability can greatly alter treatment efficiency, considering that changes in soil type, channels due to natural soil variability or tree root interference, or compression of the soil leading to clogging can all have a negative effect on waste water treatment even in properly installed systems. Additionally, excessive discharges or soil saturation due to rainfall may challenge the required flow rate of the waste water through the subsurface.

The goal of the OWM is to provide, “Clean and Safe Water for all Americans.” To realize this goal, the agency is initially targeting point source wastes from combined sewer overflows, municipal treatment works, and industries, aiming to reduce these wastes by 30 percent, before 2006, compared to 1992 levels. The NPDES plays a major role in control efforts where currently >200,000 sources are regulated, in the U.S., by program permits Nonpoint source pollution, such as from storm water discharges and combined sewer overflows, presents a greater challenge where public notification and improved maintenance are suggested control efforts until long-term solutions, such as storage and treatment facility construction, are developed.

Achieving the goal of clean and safe water for all Americans requires effective waste management and technology improvements. Such improvements are associated with significant costs and infrastructure needs. In other words, the goals will not be met overnight. According to the Clean Watersheds Needs Survey (CWNS) 2000 Report to Congress (http://www.epa.gov/owm/mtb/cwns/), a total of $181.2 billion is needed for municipal waste water treatment (Table 1). 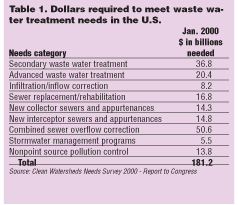 Conclusions
Faulty septic systems, overflowing sanitary sewers, urban runoff and agricultural wastes are all known to contribute to contaminated drinking water and in some cases, drinking water outbreaks of human disease have been documented. Rural and groundwater supplies often receive no treatment prior to consumption. Although regulatory control is tightening on both waste water discharges and treatment, as well as watershed protection and source water treatment, the public is still at risk of exposure to harmful pollutants that escape current treatment applications. Although few POU treatment devices are designed for waste water treatment, many would be able to handle episodic contamination events and therefore provide a greater safeguard against exposure to a variety of the pollutants common to waste water.