Finding New Ways For a Nation to Drink Clean Water 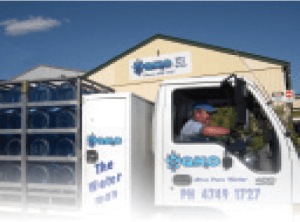 Introduction
“A good Australian story should include something of the great distances and wide open spaces, the wonderful native flora and fauna – gum trees, kangaroos, crocodiles and easy-going, laconic people. This story, in truth, embraces all those characteristics.”

Darcy Redman has many stories to tell. QH2O, his bottled water dealership in Queensland, covers those Australian distances each and every day on its way to many of their most loyal customers. However, looking for new ways to serve his customers and expand his business, he’s traveled far from his native “Down Under,” first to WQA Aquatech Las Vegas 2005 and then through the remainder of the American Southwest. Along the way he’s telling his stories and learning new ones about the water treatment industry in the United States.

Background
QH2O was founded in 1995 by a science teacher in the city of Mount Isa, an isolated mining community with a total population of about 26,000 people located in the heart of the Carpentaria Minerals Province, the world’s largest base metals mineral deposit. Mount Isa is about 1,200 miles from Brisbane, and further from anywhere else! The small company was owner operated, with daily deliveries of about 100 bottles of water.

Darcy Redman, a motel owner and president of the Mount Isa Chamber of Commerce, learned of the teacher’s transfer to another city and the impending close of QH2O, from his friend, Sam Balch a land assessor in Mount Isa.

Together they purchased the company. What began as a new business venture in 1998 has expanded in the last decade to become quite a lot more. Today, Balch oversees the daily operations of the company from Mount Isa, while Redman, now semi-retired, explores new ways to both expand QH2O’s reach, and bring safe drinking water to the thousands of miners and other rural citizens of Australia’s Outback.

“I’ve made it my quest, really,” Redman explains. “You see, when you’re living in the coastal areas, in places where bottled water is the norm, you don’t think of the fact that your inland countrymen often have trouble simply finding enough to drink – let alone good quality water.” 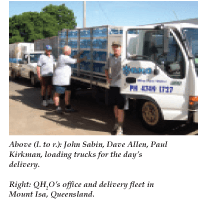 The Churchill Fellowship
With his wife Karin, Darcy Redman is currently in the midst of a 10-week driving tour of the American Southwest, exploring firsthand the water treatment technologies used in rural desert climates akin to Queensland, where summer temperatures top out at 129º F. The trip is the unique product of Redman’s personal quest and the resources of the Winston Churchill Memorial Trust. The Trust provides Australian citizens with financing for overseas research projects. With his Churchill Fellowship, Redman is studying production methods of high-quality drinking water with an emphasis on the storage, safety, transport and local manufacture of water in the U.S.

The goal, Redman said, is to adapt the U.S. tried and true practices to the realities of folks living in rural Australia. So far, bottled water has been a standard for people living in Mount Isa and populous areas of Queensland, but in the more rural areas, the situation is ripe for the introduction of POU/POE equipment.

“Point of use is really what this trip is all about,” says Karin Redman, Darcy’s wife and a partner in the company. “What many of the people need [living in the rural areas of Australia] is a POU system that can be easily maintained; one that can stand up to the desert heat, doesn’t need constant maintenance and is reliable enough for someone living 200 miles away from the rest of the world.”

While the company has its eyes on expansion of their own facilities throughout Queensland, the ultimate goal is broader than increased profit and market share. Instead, the Redmans envision an Outback with guaranteed access to clean drinking water for all, through municipal systems and POU/POE treatment for those with only well water access.

Adapting to meet unique needs
While their production facility, which has a capacity of more than 700 five-gallon bottles per day, is full of technology typical of that developed in the U.S., very little of QH2O’s delivery and production processes fit the norms of their American counterparts. Time and time again, the harsh environment of Australia has forced Darcy Redman and his associates to rework from the ground up his existing bottling technology, delivery methods and cleaning operations. 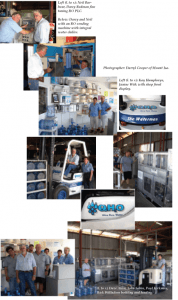 “It’s a constant struggle to find ways to beat the climate conditions and remoteness,” Redman says, “but we’ve had success by simply putting new brains (process control) into our machinery.”

Most every electronic component in his production plant, from automatic injectors to bottled washers, has been reprogrammed to be more efficient and more durable. As always, “The key to success rests with the people”, and Redman makes specific reference to the “Wonderful people including our manager, our electronic technician and our factory crew who have joined this little company”.

The result, Redman says, is the ability to provide what few other dealerships in the Outback provide—reliability despite an unforgiving environment.

Refreshing success
Redman and his partners have helped to transform QH2O into a dealership with more than 5,000 residential and 400 commercial customers. Prior to their establishment, the only bottled water available to the communities they serve was trucked in from the coast some 650 miles away. What was once a luxury is now inexpensive, reliable and readily available year-round.

In the end, Redman says that QH2O is one part of the water industry in Queensland that is helping to make all of Australia safer and more livable in its most inhospitable regions. Like many of the water treatment professionals in the country and abroad, QH2O is more than simply a small business; this company’s members strive to improve the quality of life for their fellow Australians.

“We were privileged to discover the water industry. We remain fascinated and excited by its potential and we all enjoy a beer around a barbeque after a hard week’s work.”

When the Redmans are not tending the business in Mount Isa they are living “on the water” – on their yacht Koolulla sailing the beautiful waters of the Great Barrier Reef.