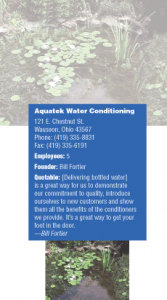 Introduction
When Bill Fortier took over Aquatek Water Conditioning in 1978, the company already had a long history in the treatment and purification industries, serving hundreds of customers in the Fulton County, Ohio area with water softeners, pond water treatment systems and exchange tank rentals.

“Our roots run pretty deep in this area,” Fortier says from his office in the town of Wauseon, Ohio. “The company’s been bringing drinking water to many people here since 1950.”

More than 25 years since he took the reins, Aquatek Water Conditioning has grown to serve thousands of customers throughout the rural town, many of whom are Fortier’s original customers from the 70s.

Fortier began his career in the water business working for Cesco Soft Water, driving delivery trucks and assisting in system repairs and installation. The local company was purchased by a chemical engineering corporation based in Indiana that began shipping its exchange tanks from their offices to northwest Ohio.

“I knew that wasn’t paying out for them, making such a long drive for deliveries, so I approached them and bought their exchange tank customers in 1978,” Fortier said. “That’s basically how I plunged into the water business.”

With the 306 exchange tank customers and one automatic rental customer he purchased, Fortier began making deliveries and repairs. At the time, Aquatek was a local franchiser who had plans to duplicate Fortier’s model across Ohio and elsewhere in the United States. While there are a handful of Aquatek water dealers in the region, Fortier said, the expansion plan never really took off and his dealership, despite still carrying the name, is now independent of the Aquatek franchise.

Products and services
Today, Aquatek Water Conditioning offers a variety of products and services, including residential, commercial and industrial water treatment, as well as water softeners for sale and rental. The majority of the company’s residential business comes from sales, Fortier says, but rentals have helped the company reinforce its longstanding reputation for superior customer service. Unlike any other dealer in the region, Aquatek Water Conditioning still offers exchange tanks to its original customers as needed.

In addition to the typical line of water conditioners and treatment equipment, Aquatek Water Conditioning has also expanded its services to delivering bottled water. Starting in the 1980s; Fortier said, that sector of his business has seen significant growth over the past two decades. “It’s a great way for us to demonstrate our commitment to quality, introduce ourselves to new customers and show them all the benefits of the conditioners we provide. It’s a great way to get your foot in the door.”

The most unique of Aquatek Water Conditioning’s services is the installation and maintenance of pond water treatment systems.

“In our area,” Fortier explains, “many people have wells but in certain areas, they use ponds.” This is because in the region the groundwater that is accessible typically has high salinity, and extremely high levels of iron and sulfur. “What they do is simply tap their farm pond waters for use in their home.”

The practice dates back generations, Fortier said, but until the 1950s typically included little or no filtration or purification of the source water before being used in the home. Today, Aquatek Water Conditioning installs floating pond filters and pressure pump systems to sanitize and disinfect the water before it enters a customer’s home.

Additional RO systems and whole-house water conditioning systems have also become very common in the areas where pond water is readily used as a potable source.

Customer service is key
While the company recently moved into a 13,000-square-foot facility in Wauseon, Fortier said Aquatek Water Conditioning has no plans for expanding its services or product line. “We’re happy doing what we’re doing. We do it well and our customers appreciate having consistently good service,” he said.

As he has for more than two decades, Fortier said Aquatek Water Conditioning will continue to focus on quality service as the key to retaining customer relationships that can be measured not in years, but in decades.

“It’s about knowing your customers individual names, as well as their needs. It’s about taking an active role in their health and their families’ health and showing them—each and every one—that they can trust us to give our very best,” Fortier said.