Last year was a blockbuster for merger and acquisition (M&A) activity in the water filtration and treatment sector with $5 billion worth of announced activity, the highest level since 1999, when USFilter was sold. Given the water filtration/treatment sector’s attractive growth characteristics, relatively high barriers to entry and increasing globalization, M&A activity has been healthy over the last 10 years. The sector’s M&A activity has generally followed the broader M&A and equity markets (i.e., had a big run during the mid-1990’s, experienced a slowdown post-technology bubble burst and recession in 2000-2002 and then accelerated again beginning in mid-2003 through the present). For the purposes of this article, the focus is on only water filtration/treatment media, components and equipment providers rather than on the more liberally defined “water industry,” which also encompasses a broad range of companies, such as water utilities, consulting and engineering firms and manufacturers of water control and delivery equipment (pumps, valves, pipes and infrastructure supply) and others.

Water filtration M&A drivers
Key drivers of consolidation in the water filtration/treatment sector include economies of scale, high barriers to entry, horizontal integration and increased interest from outside the water sector. Global growth of water filtration/treatment application demand is serving as a catalyst for consolidation within the sector. Larger companies can leverage global distribution and realize economies of scale in research, development and manufacturing. Economies of scale can provide operating leverage and significantly reduce per-unit manufacturing and development costs. Automation, low labor content and fixed tooling costs provide leverage as volume increases. Transition to manufacturing in low labor cost countries has been underway for years.

High barriers to entry, including high technical requirements, widespread patent protection and brand importance, characterize the water filtration/treatment sector and have also been factors driving consolidation. It can be less expensive and strategically appealing to purchase market share or acquire a product line. Building a market presence, even with a superior product, can take considerable time and require a company to sustain significant losses until economies of scale are achieved.

Most of the consolidation that has taken place in this sector has been of the horizontal variety. Firms have sought to add additional business activities or product lines at the same level of the value chain or to diversify by acquiring unrelated but similar businesses. Like many industries, water filtration/treatment customers have increasing needs and would like to do business with fewer suppliers. Filtration/treatment applications are increasingly sophisticated, requiring more systems and fewer individual components. Also, there is the allure of increased market power and shared resources.

The strong fundamentals underlying filtration sector businesses have attracted increased interest from companies outside the sector. The sector’s relatively large and fragmented market size, strong growth prospects, recurring revenue opportunities and healthy margins have drawn the attention of large diversified companies. Headlined by GE’s and Pentair’s acquisitions and investments to build their water platforms, several significant companies have positioned themselves to participate in the growing global water treatment industry.

M&A retrospective
From 1995 to the present, my firm identified 54 water filtration/treatment transactions with an aggregate value of approximately $19.2 billion (the sale of USFilter to Vivendi in 1999 being nearly $8 billion alone). This universe of transactions does not purport to capture all transactions that occurred during this time period, excluding deals under $10 million or those that were undisclosed, but the observed universe does provide meaningful trend data for consolidation in the sector.

Most market observers point to the aggregation and disaggregation of USFilter as an important force on the sector’s M&A activity during this period. In the early to mid-1990’s, USFilter alone, largely using its stock as currency, acquired about 150 water equipment or treatment participants of all shapes and sizes, including infrastructure equipment manufacturers, residential water product companies, filtration companies, distributors and municipal water treatment service contractors. At its peak, USFilter had an annual revenue run rate of approximately $5 billion (of which an estimated $2 billion was really filtration related). USFilter’s largest acquisition occurred in 1998 when it purchased Culligan for approximately $1.9 billion (18.9x EBITDA), also a sector consolidator. Of course, USFilter was itself sold to Vivendi in April 1999 for a whopping $7.7 billion (approximately 12.0x EBITDA on a pro forma basis).

USFilter’s acquisition strategy was fairly simple: consolidate the water treatment industry by buying almost anything in sight, at almost any price. As a result, the water filtration/treatment sector’s overall M&A activity benefited from USFilter’s aggressiveness. However, once the private company was in the hands of a foreign parent, its acquisition activity virtually stopped, which also appeared to contribute to the slowdown in activity in the market for filtration/treatment related properties. USFilter’s consolidation efforts, as Vivendi came to discover, resulted in a remarkably inefficient tangle of companies up and down the value chain, fraught with channel and brand conflicts and relatively weak R&D. Vivendi began to dismantle USFilter by mid-2001 and concluded the asset sale program by mid-2004.

Over the last ten years, M&A transaction sizes have ranged from the microscopic to the macroscopic. Although we have not included every small transaction that has taken place, given the consolidating nature of the sector, our dataset of 54 transactions indicates that approximately 52 percent of the transactions were between $10 and $100 million in value (see Figure 1). 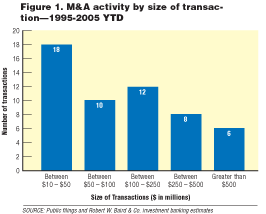 Of the 54 transactions observed, 94 percent had a strategic acquirer. With such a high percentage of strategic acquisitions in the sector, there obviously have been significant benefits to strategic consolidation. As outlined above, there are economic benefits to be realized from size (scale and volume) in R&D investment, geographic manufacturing and administrative cost absorption, as well as from broader distribution. In addition, as entry barriers are typically high in various market niches, purchasing rather than building a market position can often be the most appropriate way to enter a new market.

Acquisitions in the space of the last ten years have mostly been of the horizontal variety, (i.e., acquirers looking to increase market share, expand their product portfolio or globalize). USFilter’s strategy was mostly a horizontal roll-up, although it also sought to align itself vertically through its desire to control more distribution channels.

M&A valuations
Of the 54 transactions observed from 1995 to 2005 YTD, we determined the approximate financial terms of the transaction in 36 of the deals, which serves as a representative sample to analyze valuation multiples. Valuations, as measured by enterprise value divided by LTM EBITDA (a cash flow proxy) and aggregated by year, appear to have been relatively consistent, with the annual medians generally ranging from 8.0x to 10.0x LTM EBITDA. Overall, these strong valuation multiples reflect the fact that strategic acquirers typically bring consolidation synergies and generally have strong trading multiples themselves. However, cutting the data differently, we observe there is a wider range of multiples reflecting differences among target’s growth profile, size and profitability. Figure 2 shows the distribution of EBITDA multiples over the same time period. 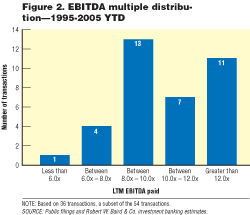 Individual deal valuations
As would be expected in any collection of M&A datapoints, there is a correlation in the filtration sector between the target’s EBITDA margin and the transaction’s revenue multiple. A regression trend line indicates the average relationship between profit margin and transaction value. If a datapoint is above the trend line, then (theoretically) the acquirer paid more for a given level of revenue profitability (i.e., EBITDA margin) than average. If a datapoint is below the trend line, then the reverse occurred.

Of course, there could be very good reasons (from an acquirer’s standpoint) why it would pay more for a given level of revenue profitability. For example, if a target company is expected to grow quickly, either because it has strong growth opportunities or there are revenue synergies, then an acquirer is willing to pay a higher multiple for a given level of revenue profitability than average. Also, the degree of aftermarket or consumables revenue influences valuation as acquirers tend to view these businesses more favorably. A good example of a transaction that is above the line for “good reasons” is CUNO’s acquisition of WTC Industries (3.00x Revenue and 13.1x EBITDA). WTC had a leadership position in the replaceable water filtration market for refrigerators and CUNO was able to consolidate its market position and operational activities, in a price-driven environment (see Figure 3). 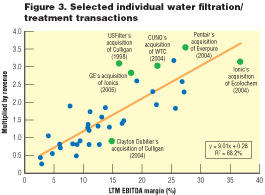 The structure of the transaction may also generate some tax benefits for the acquirer that are not evident in the target’s financial performance. For example, in Pentair’s acquisition of Everpure (3.50x Revenue and 12.7x EBITDA), the structure of the deal will allow Pentair to deduct a significant level of intangibles for income tax purposes, creating future cash flow in the form of lower cash income taxes. It is estimated that the present value of these cash flows was about $35 million, which implies that Pentair really only paid about $180 million or 10.6x EBITDA for the business itself. Still this is a healthy multiple, but if the transaction’s datapoint were recast on the graph, it would only be slightly above the regression line.

On the other hand, there can also be negative reasons (from an acquirer’s standpoint) why a datapoint is above the line; the acquirer simply overpaid for the acquisition, as the target did not have the growth potential or other promise expected by the acquirer. The best example of this scenario is USFilter’s acquisition of Culligan (3.05x Revenue and 18.9x EBITDA) in 1998, which happens to be the datapoint that is the farthest above the trend line. In hindsight, USFilter was paying with its own overvalued stock at the time, and USFilter’s shareholders did just fine with the subsequent sale to Vivendi. Proof that USFilter overpaid is the 6.1x EBITDA multiple that Clayton Dubilier paid to acquire Culligan, although we should note that Culligan’s business composition had changed somewhat since USFilter acquired it.

2005 and beyond
To be sure, 2004 was an incredible year for M&A activity and was well beyond the historical averages (12 transactions totaling $5.0 billion in transaction volume, including several mega-deals). Adjusting for the sale of USFilter in 1999 and the Ionics deal which closed in 2005, over the last ten years the average annual deal volume has been five reported transactions (greater than $10 million in size, etc.) totaling approximately $1.0 billion.

So are we being set up for a fall off or are the M&A markets poised for continued activity? All indicators are pointed toward continued activity, and we would expect 2005 to generate as many or more transactions as that produced in 2004, but more at the historical size averages (approximately $150 million per deal). Thus, we could see 2005 generate approximately $1.8 billion in total transaction value, although, it is highly dependent on having a couple sizeable transactions.

In particular, we think 2005 will be the year some prominent private companies decide to seek liquidity. The robust 2004 water filtration/treatment M&A market, coupled with rebounding economic growth and pressure to have scale and global capabilities, have provided private companies with the catalyst to maximize value.

M&A valuations have been consistent over time at 8.0x to 10.0x with faster growing companies and the highest strategic fit targets generally garnering the highest multiples. There is also a scarcity premium to be paid for significant water filtration/treatment businesses, as less available supply increases demand. The equity markets will continue to reward the sector’s business model with comparatively strong valuation multiples, and so strategic acquirers will continue to have ammunition to acquire and integrate.

About the author
Stephen B. Guy is a director in the Consumer & Industrial investment banking group at Milwaukee-based financial services firm Robert W. Baird & Co. Baird is a leading middle-market focused investment bank serving the M&A and equity financing needs of our clients throughout the U.S. and Europe. Since 1995, the bank has advised on more than 300 M&A transactions totaling over $45 billion in value and has served as lead or co-manager on more than 200 equity offerings totaling over $26 billion. Baird has advised on over $1 billion of M&A activity in the filtration industry, including four transactions in 2004 totaling over $375 million.