Treatment of water at the point of entry (POE) typically involves conditioning or softening to modify minerals in the water, whereas point of use (POU) water treatment more often targets the removal of toxic chemicals and/or microbes. Increased awareness of the possibility of microorganisms being transmitted via the aerosol and contact route at the POU supports the need for purification technologies at delivery points beyond the drinking water tap.

In addition, recent studies have shown that regrowth organisms readily occur in distribution systems and that household plumbing can significantly contribute to the overall microbial load in the water, measured at the point of use.1

It is well known that water has the potential to become contaminated after it leaves the treatment plant. In the 2004 WQA Consumer Attitudes Survey, 64 percent of consumers reported being concerned about their water (up 20 percent from 2001) and 45 percent feel their drinking water is not as safe as it should be. The public is certainly more aware of water quality, partly from EPA-mandated Consumer Confidence Reports (provided by water utilities and sent yearly to every billing address) and partly due to media headlines of waterborne outbreaks and boil water alerts.

Exposure routes of waterborne disease
Water has a multifaceted role in the transmission of disease-causing microbes, with four major categories of classification. Microbes with transmission routes related to water may be waterborne, water-washed, water-based or associated with water-related insect vectors.

Waterborne diseases are those that originate in feces and contaminate water. Examples are cholera and typhoid, where fecal-contaminated water is ingested, resulting in human illness. Water-washed diseases are associated with fecal organisms that cause disease via contact with contaminated water. In areas with poor hygiene and sanitation, the lack of adequate amounts of clean water for hand washing and bathing contributes to a variety of diseases of the eye and skin, such as trachoma, conjunctivitis and scabies. Water-based infections typically involve worms that require an aquatic environment to sustain their lifecycle. Examples are schistosomiasis, acquired via contact with trematodes (a class of parasitic flatworms) and dracunculiasis (more commonly known as Guinea worm disease {GWD}, a preventable infection caused by the parasite Dracunculus medinensis) acquired via ingestion of guinea worm larvae. Finally, diseases associated with water-related insect vectors include malaria, where the mosquito vector requires water for breeding.

Although water plays a critical role in the transmission of the above-listed diseases, in industrialized countries municipal water treatment, water resource management programs and source water protection programs have addressed many of these public health issues. Even water that is adequately treated and securely distributed is subjected to biofilm microbes. In non-sterile water solutions, planktonic (free-floating) bacteria readily attach to surface walls and rapidly proliferate. Biofilms can affect the function of water quality by causing taste, odor and corrosion problems and may potentially pose a direct health risk.

Microbes of concern
There are two general categories of microbial pathogens: frank and opportunistic. Frank pathogens, such as Cryptosporidium, Salmonella and hepatitis A virus, cause disease in the general public as well as the immunocompromised; whereas opportunistic pathogens, such as Pseudomonas aeruginosa, Aeromonas sp., Mycobacterium avium complex (MAC) and Legionella, are usually not harmful to healthy individuals, typically infecting only those with compromised immunity. Opportunistic bacteria are common to treated water and have been documented in drinking water at rates up to 24 percent, 27 percent, 70 percent and 33 percent, respectively.2 Various studies of hospital water supplies found a prevalence of Legionella colonized in the water systems ranging from 12-85 percent.3 Little is known about the prevalence of these organisms in household water systems and the risk to those exposed. One thing we do know is that the immuno-compromised population is growing as people live longer with chronic illnesses.

Legionella and MAC are probably the two organisms of greatest concern in distribution channels of treated water supplies. Both are commonly present in tap water and can cause disease in healthy populations. Little is known about Mycobacterium avium complex (MAC) but the U.S. EPA has placed MAC on their top 10 list of waterborne, health-related microbes in need of methods development for research on the assessment of health effects, occurrence in water and treatment. Although an isolated case of MAC infection in an apparently healthy individual has been documented, persons most at risk of MAC infections are the immunocompromised, especially those previously infected with the human immunodeficiency virus (HIV). In HIV-positive patients, MAC is the most common bacterial infection, occurring in as many as 43 percent of people within two years of being diagnosed with AIDS. MAC organisms are highly resistant to disinfectants compared to indicator bacteria, (580 to 2,300 times greater than E. coli). The levels of chlorine routinely used in drinking water treatment are, therefore, unlikely to be effective against MAC organism and may account for their presence in distribution systems.4 The bacteria were also highly resistant to alternative disinfectants such as monochloramine, chlorine dioxide and ozone.

Legionella is the causative agent of Legionnaires’ Disease and Pontiac Fever. Both syndromes are characterized initially by anorexia, malaise, myalgia and headache. Within 24 hours a fever and chills ensue. A nonproductive cough may occur and abdominal pain and diarrhea are seen in many patients. Respiratory failure is also possible, with a 15 percent fatality rate in hospitalized cases. Pontiac Fever most commonly occurs in healthy persons and is a much milder form of the disease, with no pneumonia or death. The infection is self-limiting in two to five days.

Over 28 species of Legionella cause disease, with L. pneumophila being the most prominent pathogen of the group. The disease is found worldwide with most cases occurring in the summer and fall months. Hot water systems, air-conditioning cooling towers and evaporative condensers have all been implicated in outbreaks, in addition to decorative fountains and retail store misters. The organism has been isolated from creeks, ponds and soils. Transmission is thought to be via aerosol inhalation. One to 20 percent of the general population has been exposed, according to serological studies. The bacterium may grow to high numbers in waters as hot as 40° C (105° F).

Naegleria fowleri is perhaps one of the most daunting waterborne pathogens known in the United States, with an occurrence of one to three cases per year in the U.S. Although infections are rare (one in 100 million chance of contracting the disease), the fatality rate is about 95 percent, with few treatment options available. The parasitic protozoa is actually a free-living amoeba, commonly present in soils and surface waters worldwide. Under ideal conditions, such as warm water (usually above 80° F) and access to the nasal passages (via head submersion), the organism travels up the cells of the nervous system to the brain, where it effectively destroys brain tissue, causing primary amoebic meningoencephalitis (PAM) and usually death within a week. Several incidences of PAM resulting from total immersion in bathwater have been reported. In 2003, two previously healthy children in Arizona died due to PAM. Survey of the victims’ homes found 17/19 water-related sites sampled were positive for Naegleria fowleri.5 Other surveys found the organism in 22 percent of the samples collected from hot water systems of six hospitals. A year-round survey of aquatic environments in Tulsa, Okla., found N. fowleri in 18 percent of the 2,016 processed water and swab samples collected.

Conclusion
Although serious health risks are relatively uncommon, one can envision expanded water treatment options at the POU that will aim to reduce water-related disease transmission from alternative routes of exposure. An increasing number of consumers want higher quality water in their home, but the trick is tailoring POU treatment devices to specific exposure sites. 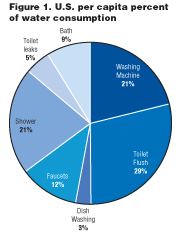 Figure 1 shows the typical per capita water usage per day in the U.S. The majority of water consumption in a household is due to toilet flushes (29 percent), with washing machines and showers utilizing the second largest share (21 percent each). Water passing through all household faucets comprises 12 percent of use, with bathing (nine percent), toilet leaks (five percent) and dishwashing (three percent) completing the total consumption. Shower and bathroom faucets are expected to be growing target areas for POU treatment in the home, where microbial disease transmission can potentially occur.