The following is an excerpted version of  the AWWA report. Additional information can be found at www.awwa.org.

The existing surveys (used) included studies by USEPA and by the States of Arizona, California, Massachusetts and Texas. Perchlorate occurrence was found to be national in scope, with detections in 26 states and Puerto Rico. Perchlorate was detected in at least one entry point to the distribution system of approximately five percent of the nation’s large (>10,000 population) Community Water Systems.

Geographically, the highest density of perchlorate detection was found to be in Southern California, west central Texas, along the East Coast between New Jersey and Long Island and in Massachusetts. At the present time, no perchlorate has been detected in drinking water in the northern Great Plains, the central and northern Rocky Mountains, Alaska or Hawaii. If detected, perchlorate was typically present at concentrations of less than 12 µg/L. 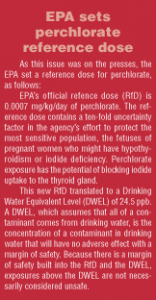 While completely mapping the perchlorate detections of the databases which were analyzed, (this analysis) is likely to under represent the occurrence of perchlorate in drinking water. This is because small systems are under represented in the UCMR data and the UCMR study is incomplete. In particular, relatively sparse sampling data exists for the northern Great Plains and the central and northern Rocky Mountains.

The USEPA has not proposed a Maximum Contaminant Level (MCL) for perchlorate. However, eight states have established guidance levels or goals for perchlorate in drinking water. Depending upon the state, the guidance levels range from 1 µg/L to 18 µg/L. Hence, it appears that a MCL in the range of 1 µg/L to 20 ug/L is plausible. Using information from this study a preliminary estimate of the percentage of systems which could be impacted by a range of potential MCLs was made. Table 1 compares the percentage of systems impacted by alternative MCLs for the UCMR, California and Massachusetts data. The Arizona study is not included in this comparison.

National assessment
With the objective of assessing perchlorate occurrence in US drinking water supplies in mind, the following conclusions have been drawn from the study: