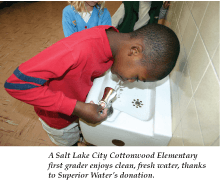 When Mark Lambourne’s son came home from elementary school four years ago complaining about the taste of the water coming out of his classroom drinking fountain, Lambourne, the vice-president of Superior Water and Air in West Valley City, Utah, did what he does best. He filtered the water himself.

The improved classroom water was such a hit with his child’s teacher that it wasn’t long before all the other teachers in the school wanted the same. Lam-bourne happily obliged and today, every fountain in the small school has had an addition from Superior.

When his son moved on to the local junior high school, Lambourne filtered the water in all those drinking fountains, too—and Superior Water has maintained the filters in both schools ever since.

What started as a small community project to provide his son and other students with quality water has grown exponentially. After reading recent press regarding lead contamination and poor water quality in Washington, D.C.-area schools, Lambourne made a personal vow that soon became a family and company goal—to filter more than 18,000 drinking fountains in more than 750 Utah public schools, all at no charge to the schools or taxpayers. 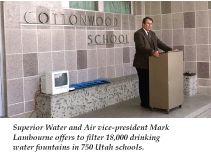 “I think the legislation mandating this was coming down the pipe anyway, but the bottom line is that our kids were drinking potentially unsafe water,” Lambourne said. “It’s not really a question of ‘Are we really going to do this?’ but rather ‘This needs to be done, how are we going to accomplish it?’”

If the state had bid the project out to another company, the cost would be pushing two million dollars, Lambourne said. But after making his desire to help known to the local school districts, Lamobourne and Superior received additional help from one of their suppliers, Standard Plumbing Supply.

“They’re a family company like us and they realized the importance of this task,” he said. “The whole idea coincided with our 50th anniversary and so it has become, really, a ‘thank-you’ to the community that has helped us along throughout the years.”

The donation was accepted in June 2004 by Utah governor Olene Walker and deputy for education Dr. Darrell White. Dr. Stephen Ronnenkamp, superintendent of the Granite School District, Utah’s largest school district with 70,000 students, was the first to jump at the chance to clean up drinking water and Superior has since completed the majority of the work in that district. They are now moving on to Utah’s second and third largest school districts: Jordon and Alpine. Anderson estimates it will take a year to complete the entire project.

“We couldn’t do it without the generous help of our co-sponsors, Standard Plumbing Supply, donating the supply lines and CUNO Inc., which is supplying the filters at a discount,” Lam-bourne said. Superior’s local media partner, CBS affiliate KUTV and its general manager Dave Phillips in Salt Lake City, have lent both media and television production support.

The company has also formed a non-profit organization to assist in delivering on the Superior promise. Safe Water for Utah Kids helps to monitor and maintain the school drinking fountain program and Anderson is busy aligning corporate sponsors to help defray the on-going expense of filter replacement.

“Based on current trends,” said Jake Lambourne, Mark’s father who founded Superior in 1956, “it is only a matter of time before the government mandates water quality in our schools. I like the idea of Utah taking the lead and setting the example for the nation—and I like the idea of Superior Water and Air being part of that.”

Superior sells its own brand and services all makes and models of water softeners and water purifiers—and recently added a whole house air purification system to their product/service offering.