Give Your Customers Something To Roar About 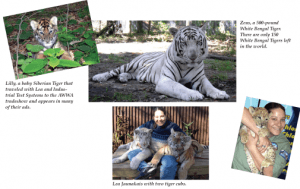 ith a love of exotic cats and a long career in the water treatment industry, Lea Jaunakais has found a way to turn her two passions into a mutually beneficial relationship.

The vice president of Industrial Test Systems Inc., Jaunakais spends her free time volunteering at Metrolina Wildlife Park in Rockwell, N.C., a nature preserve where many of the region’s injured and neglected exotic animals have been transferred to heal and live out their lives in captive comfort.

“I think most people would be surprised by how easy it is to get an exotic animal as a house pet,” Jaunakais says. “It’s sad because they don’t see the bigger picture, the impact that one animal has on the entire dwindling population worldwide. They didn’t know what they were getting into in the first place and just get tired of having to take care of what they thought would be a neat pet.”

With a degree in biology and an interest in animal behavior, she tends lions, tigers, jaguars, leopards and many other exotic cats and endangered species at the preserve. Her efforts have helped the nonprofit organization rehabilitate injured animals, provide care and homes for abandoned and neglected exotics and expand the captive breeding programs that are helping to repopulate the animals and give them a greater chance at survival for future generations to enjoy.

“Many animals, unfortunately, are surviving only because of captive breeding and are no longer found in their native habitats. The only ones that are left are the ones in captivity,” she says. Unfortunately, with the rate of decrease of many endangered species, numerous animals will suffer that fate and tigers are one of them. “That’s a sad thing, but it’s also hopeful in a way because these animals help raise awareness in our community that something needs to be done to protect all species that are at risk.” We must take responsibility and do something, she believes.

The result is twofold, Jaunakais says. First, being around a large number of people helps accustom the cubs to human interaction, which allows unprecedented care for the animals later in their captive lives. Second, it raises awareness and educates people about the plight of these animals. “We have developed a growing community within the water treatment industry that has taken an active role in protecting the world’s endangered species through monetary donations and volunteer work. Both these results combine to make it possible for groups like Metrolina Wildlife Park to protect endangered species in captivity and protect those in the wild from being further endangered,” Jaunakais says.

For more information, to sponsor an animal, or to make a donation to Metrolina Wildlife Park, call (704) 279-6363 or visit www.metrolinawildlifepark.com