Manufacturers often test filter systems for the following combination of claims: Cyst Reduction, Turbidity Reduction, and Nominal Particulate Reduction, Class I. All are mechanical filtration claims, meaning that the filtration mechanism is a sieving of particles as opposed to a chemical interaction with an adsorptive or absorptive media. As mechanical filtration claims, all of the test protocols involve clogging the filters with specific test dust and collecting samples of the influent and effluents as the flow rates of the filters decrease.

Due to the mechanical filtration mechanism and relatively small particle sizes associated with these claims, the test protocols are comparable to the extent described above. Because of this comparability in test protocols, manufacturers often expect results of one of these tests to be predictive of results of one or more of the others. It is not unusual for a manufacturer to ask if passing a cyst reduction test is sufficient to justify a particulate reduction, Class I claim or a turbidity reduction claim.

Although the tests have certain similarities, they are very different. These differences are significant enough to render them non-predictive of each other. It is possible for a specific filter system to pass any one or two of the three tests, but fail the remainder. So, the answer to questions of one successful test or two successful tests from this group justifying additional claims is a resounding, “No!”

Differences among the tests
A direct comparison of the three test procedures can be seen in Figure 1. The following discussion highlights the significance of aspects of the differences in procedures. 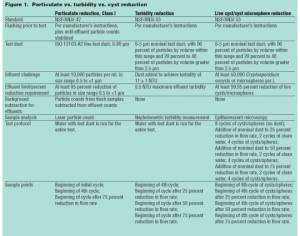 Particulate reduction under NSF/ANSI 42 discounts the particles that are originating from the filter itself. That is, any particulate shedding off the filter media is analyzed, flushed and accounted for, such that particulate counts in the effluents can be directly correlated to influents. NSF’s procedure is to flush the filters prior to beginning the test until the particle counts in the size range of interest are stabilized, or five sets of flush samples have been collected and analyzed. This can involve running a few gallons of water through the test filters, or it may mean running tens of gallons. Then, when the effluents are analyzed, the background particle counts established through the flushing samples are subtracted from actual effluent counts to arrive at the reported effluent values. Through this procedure, the effluent particle counts are tied directly back to the influent challenge. This procedure can allow a product with significant shedding of particles to achieve conforming results under the Particulate Reduction Test. The particulate reduction, Class I test also uses fine test dust, which has a very different particle size distribution with much fewer small particles than the 0-5 micron nominal test dust used in the turbidity reduction test.

The cyst reduction test under NSF/ANSI 53 is a very different test from both the particulate reduction and turbidity reduction tests. Live Cryptosporidium oocysts or microspheres must be reduced by 99.95 percent. This is a much higher reduction percentage than is required under either of the other two tests. The particles themselves are in a very specific size range—95 percent of microspheres are 3.00 µm ± 0.15 µm, and Cryptospo-ridium oocysts range in size from about 3 µm to about 7 µm, with most being about 5 µm. It is possible that filters could allow particles in the Class I size range or small particles contributing to turbidity to pass through, while retaining particles in this size range. Also, the analysis is very specific with no doubt as to the source of the contribution to the effluent—the only way for Cryptospo-ridium oocysts or microspheres to show up in the effluent is to go through the filters. For enumeration, Cryptospo-ridium oocysts are stained and counted under an epifluorescent microscope. The microspheres are fluorescent to begin with, so they are simply counted under the microscope. This epifluorescent microscopy is highly specific, with no possibility that particles shed from the filters themselves will be contributing to values detected in the effluents.

No predictive relationships
NSF has not been able to use any one of these tests to predict results for either of the others. Because of this lack of ability to predict, there is no potential to establish any of these tests as a surrogate for any of the others. They all have different measurement techniques. They all measure different sized particles. Contributions of the filter media to particulate matter in the effluent are addressed differently. Percent reduction requirements are different. Because of these and other differences, the tests do not measure the same characteristic of the filter. The Particulate Reduction Test measures only the ability of a filter to nominally remove particulate matter of a very narrow size range from the influent, when introduced as part of a broader distribution of sizes of particulates. The Turbidity Reduction Test measures the amount of light scattering resulting from the presence of particles in the water. All of the particles present in the effluent contribute to this scattering of light. Cyst reduction requires extremely high removal of a specific size particle that is larger than those measured in the Particulate Reduction, Class I Test, with a highly specific analysis focused only the particles of interest.

These differences are part of the reason why there are three distinct and separate test protocols to make these three distinct contaminant reduction claims. Because different characteristics of the filter are being evaluated, and because of the lack of ability to predict results based on other tests, it is not possible to use any of these tests as a surrogate for the other two. Anyone who may have thought that successful particulate reduction, Class I and turbidity reduction test results were automatic based on successful cyst reduction testing should reconsider their logic and assess the other tests on their own merit.

About the author
Rick Andrew has been working with certification of residential drinking water products for NSF International for six years. He has been the Technical Manager of the Drinking Water Treatment Units Program for three years. His previous experience is in the area of analytical and environmental chemistry consulting. Andrew has a bachelor’s degree in chemistry and an MBA from the University of Michigan. He can be reached at 1-800-NSF-MARK or email: Andrew@nsf.org.