Underground Storage Tanks in the U.S. 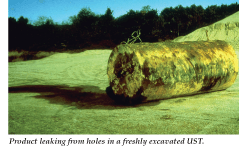 Underground storage tanks (USTs) are single or multiple tank systems, with connected pipes, that are submerged a minimum of 10 percent underground. More than two decades ago, an exposé by the CBS program 60 Minutes opened the nation’s eyes to the problems associated with leaking underground storage tanks (LUST) and the impact on drinking and recreational water supplies. In that story, CBS focused attention on gasoline leaking from USTs where the groundwater supplies of several families were significantly tainted. About a year later (1984), Congress and President Ronald Reagan signed into law Subtitle I to the Resource Conservation and Recovery Act (RCRA) a result of which required the United States Environmental Protection Agency (U.S. EPA) to create the National Underground Storage Tank Program. This program was designed to develop regulatory standards for UST storage, leakage prevention measures, release monitoring and clean-up action. Now on the 20-year anniversary of the program, the EPA is looking back at their accomplishments and forward at what is left undone via a recently released report on Underground Storage Tanks (EPA 510-R-04-001). 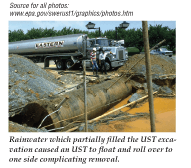 Groundwater Concerns
Only those USTs housing petroleum or select hazardous substances are regulated by the federal government. USTs containing hazardous substances are required to have secondary containment (i.e., housed in a larger tank, concrete vault, or lined site). Most regulated USTs contain petroleum and are located at sites where gasoline is sold or used for commercial operations (i.e., service operators or local governments).
bout 25,000 regulated tanks hold other hazardous substances. Currently, about 1,200 substances are recognized as hazardous under the RCRA. The number of chemical contaminants in use, however, is staggering. According to the Chemical Abstract Service (CAS; Columbus, OH) there are currently 24 million registered organic and inorganic chemical substances, compiled from the scientific literature, beginning primarily in 1957. New chemicals are added to this list at a rate of about 4,000 per day (www. cas.org).

Over 35 states reported USTs to be one of the top sources of potential groundwater pollution in recent (2000) data supplied under Section 305 (b) of the Clean Water Act. Furthermore, petroleum is the most common contaminant in groundwater. Drinking water sources near contaminated UST sites are vulnerable to a wide range of chemicals that can cause acute or long-term health effects. In significant doses, compounds such as those found in petroleum products and others that may migrate to source waters may be carcinogenic (cancer-causing), mutagenic (causing mutations), or teratogenic (causing birth defects). In addition they may be fire or explosion hazards and can certainly impart undesirable tastes and odors to contaminated waters.

Sites vary widely as to the level of contamination, environmental impact, associative costs and contaminant complexity. Petroleum products, for example, contain hundreds of chemical compounds including benzene, toluene, ethylbenzene, xylenes (BTEX compounds), MTBE and methanol. To date, there are about 676,249 active USTs in the U.S. with 443,568 sites confirmed as releasing contaminants. About 311,125 cleanups have been completed, leaving approximately 132,443 sites untreated. A summary of the status of individual states can be found at www.epa.gov/swerust1/index.htm. Nationwide, more than 50 percent of the sites remaining are known to involve groundwater (www.epa. gov/swerust1/pubs/cleanup_ brochure.pdf).

Clean-up status
The final deadline for UST owners to close, upgrade or replace their tanks was in 1998. During the last two decades, 1.5 million outdated and unsafe USTs were taken out of use, 400,000 cleanups were initiated and 300,000 petroleum releases cleaned up. Almost all USTs have been upgraded and replaced during this time frame, contributing to a dramatic reduction in overall releases. In 1990, a high of 66,000 LUSTs were identified, however this number has dramatically decreased in the last year to about 12,000, still over the U.S. EPA’s maximum level goal of 10,000 new releases. The main cause of new releases is the lack of proper operation and maintenance of USTs. According to the U.S. EPA FY 2004 Semi-Annual End-of-Year Activity Report, written on November 24, 2004, the current number of new UST releases has decreased to 7,850—a 35% reduction over 2003 figures—meeting U.S. EPA set goals.

Costly but effective improvements
For clean up of LUST sites, the U.S. EPA established the LUST Trust Fund, financed by a 0.1 cent per gallon federal tax on all motor fuel sold in the U.S. Initiated in 1986, this fund appropriates about $72 million per year for LUST site clean-up, specifically for monitoring and enforcing a corrective response from a responsible party, or for clean-up when the responsible party is not known or unresponsive. LUST Trust Funds have also been used in situations where emergency response action was needed. 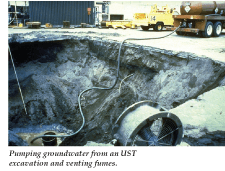 The average cost of LUST clean-up is estimated at $125,000 but can range from several thousand to millions of dollars, depending on the extent of the clean-up and the involvement of soil and water environments. About 40 states have UST cleanup funds that are locally raised and separate from Lust funds. Collectively, the nation raises and spends about $1 billion annually for such clean-up efforts.

There is much work ahead: U.S. EPA goals are to complete 18,000-23,000 clean ups each year from 2003 to 2007. This schedule is expected to reduce the backlog of releases by half (the cumulative number of confirmed releases minus the cumulative number of clean-ups completed), particularly for petroleum leaks (www.epa.gov/oust/goals093002.pdf). Studies aimed at characterizing these remaining sites were initiated in early 2004 and will likely provide site assessment and suggestions of the most effective remediation efforts.

A cooperative effort
The EPA credits strong partner-relationships with state and tribal governments with the continued success of the UST program, backed by solid regulation and practical controls. Regulatory control efforts were effectively aimed at preventing leaks by upgrading or closing sub-standard tanks, detecting leaks using state-of-the art monitoring and leak detection equipment and addressing leaks rapidly by requiring tank owners to prove financial capabilities to address leaks. By the end of the 2003 survey period, 70 percent of UST owners were operating their spill and corrosion protection and leak detection equipment properly. New regulation continues to address UST issues, such as the 2000 USTfields and 2002 Brownfield Law aimed at the productive reuse of some 200,000 abandoned petroleum sites.

Know your watershed
The EPA has made great strides in reducing the overall impact of LUSTs on the nation’s environments, including groundwater. Still, thousands of new releases are identified each year and highly soluble contaminants such as MTBE pose a substantial challenge for containment. Being informed about your individual water supply and the potential for UST contamination is essential to making appropriate choices about point-of-use water treatment. Consumers can monitor their particular water source by logging onto http://www.epa.gov/surf/ and locating their watershed by clicking on the “search by map” link to a specific state and city. Once you have located your watershed, you can obtain information on nearby hazardous waste sites, toxic release sites, etc.