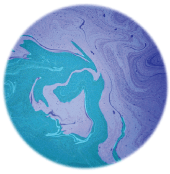 Currently, more than 100 million Americans rely on groundwater as their source for drinking. Historically, groundwater supplies were thought to be free of pathogenic microbes due to the natural filtering ability of the subsurface environment and the distance a microbe would have to travel in order to reach the groundwater source. However, increased surveillance using newly developed and sensitive detection methods has found some evidence of human enteric viruses and other potentially harmful microbes in groundwater. Although the majority of groundwater is still thought to be free of disease-causing microbes, many systems are unprotected and contamination events could occur, primarily because public systems utilizing a groundwater source are not 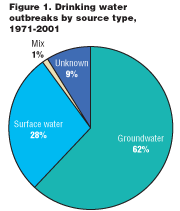 required to disinfect. In addition, private groundwater wells may be rarely, if ever, monitored.

Contaminant sources
In the United States, about 34 percent of those served by a public water system utilize a groundwater source. Although originally thought to be pristine, groundwater may be subject to a variety of chemical and microbiological contaminants. Contaminants that find their way into groundwater may originate due to lack of treatment, improper management of wastewater disposal, septic tank contamination, underground storage tank or landfill leaks, mismanagement of animal waste disposal or many other reasons.

There are approximately 25 million domestic septic tanks (20-25 percent of all households) in the U.S. (U.S. Census Bureau, 1995) with about 400,000 new ones installed each year. Septic tanks have been previously associated with groundwater contamination events in the U.S.1, 2, 3 and continue to be a concern with regard to groundwater protection. Furthermore, there are approximately 250,000 solid waste disposal facilities in the U.S. Subsurface leaching of chemical and biological contaminants could be a source of groundwater pollution from municipal waste sites. Similarly there are approximately 33,000 abandoned hazardous waste sites with similar risks and about 42 percent are estimated to have a known impact on local groundwater supplies. Finally, agricultural activities can produce both chemical and biological waste products. Of the 1.1 billion pounds of pesticides produced each year, 77 percent are applied to agricultural land. Chemical and animal wastes may infiltrate into groundwater, particularly during severe rainfall.

A drinking water outbreak in Albany, New York where 921 people were sickened following attendance at the state fair, was worsened by several unfortunate factors. Non-chlorinated groundwater was contaminated with E. coli O157:H7 and Campylobacter from manure at a nearby dairy barn after a rainstorm (CDC, MMWR, 1999). The outbreak resulted in 65 hospitalizations and two deaths. Outbreaks such as these, although rare, exemplify the potentially serious outcome of drinking from contaminated water supplies.

Monitoring data
Because of their small size and ease of transport in the subsurface, viruses were traditionally thought to be the most likely pathogen to be found in groundwater. Methods for the detection of pathogenic viruses in water have been developed but they are time-consuming, costly and require specialized training to perform. Since viruses have a low infectious dose, where only one to 10 viruses can cause infection, highly sensitive methods of detection are necessary. A recent nationwide survey of 448 utility wells in 35 states found evidence of enteric viruses in approximately 32 percent of groundwater supplies4. Monitoring studies are frequently designed to target supplies that are suspected to be adversely impacted and thus provide a worse case scenario. In addition, as in the previously mentioned study, detection methods often do not determine if the viruses are currently infectious. Evidence of virus presence in groundwater, however, is still a concern since many groundwater sources in our nation are not treated with disinfectants.

Bacteria are also not exempt from groundwater. In recent years, Helicobacter pylori was recognized as the primary cause of duodenal (90 percent) and gastric (80 percent) ulcers (CDC, 2001). It is considered a class A carcinogen, meaning that infections can lead to gastric cancer, the second most common cause of cancer worldwide, H. pylori has been found in biofilms of water distribution systems9 and individual groundwater wells. Epidemiological studies in Germany have linked infection in children with drinking untreated well water serving individual homes10. In addition, a study in West Virginia linked contaminated homeowner wells with H. pylori infection11.

Groundwater disease outbreaks
The vulnerability of groundwater supplies is further exemplified by drinking water outbreak data where the majority of documented outbreaks were traced to a groundwater source. In particular, untreated groundwater caused the majority of outbreaks in private water supplies (53 percent). Surveillance summaries by the U.S. Centers for Disease Control and Prevention provide waterborne disease outbreak data. Such data documents the known health impact of contaminated groundwater supplies. Of the 751 drinking water waterborne outbreaks that occurred in the United States from 1971-2000, 62 percent were linked to groundwater systems12. Of these groundwater outbreaks, 58 percent were from non-community systems, 28 percent from community systems and 14 percent from individual systems. In total, 94,747 cases of illness were documented (Table 2).

Currently systems strictly utilizing a groundwater source are not required to treat their water supply. Only half of communities disinfect water prior to distribution. In rural and non-incorporated areas, almost none of the water is treated and private wells are rarely, if ever, monitored for microbial contaminants. Over the last 30 years, untreated groundwater was listed as the second most common deficiency in drinking water waterborne outbreaks, responsible for 30 percent of the overall causes combined (Table 3).

Groundwater disinfection rule
In response to the recognized problem with some untreated groundwater sources, the U.S. EPA has proposed the Ground Water Rule, specifying the appropriate use of disinfection in ground water and encouraging the use of alternative approaches, including best management practices and control of contamination at the source by establishing multiple barriers against microbes in groundwater systems. According the 1996 amendments to the Safe Drinking Water Act, the EPA is required to develop regulations for groundwater systems “as necessary”. The Ground Water Rule was originally scheduled to be issued as a final regulation in Spring 2003 and is expected to be finalized by the end of this month. The regulations apply to public groundwater systems but not to private wells. EPA does, however, recommend that private well owners perform yearly coliform bacteria tests to monitor their source water quality.

Conclusion
Given the pending EPA regulations, waterborne outbreaks due to contaminated groundwater are expected to decrease over subsequent survey periods. Approximately 15 percent of Americans, however, rely on their own private drinking water supplies that would not be subject to EPA standards. Although testing services are available, private water systems are rarely monitored. For those who obtain their water from designated public groundwater supplies, the added disinfection barrier designed to prevent infectious disease transmission may leave an undesirable chlorine taste not previously experienced. Consumers continue to have the option of POU treatment at the tap (or POE treatment). Many POU/POE systems are available on the market that address the issues of microbial contaminants and/or aesthetic qualities of the water.