Pure Water Components has upgraded its website, www.pwcomponents.com, with an on-line catalog and new technical information. For additional information, visit the site or call 1-866-326-PURE (7873). ?

“Pump Systems Matter,” a new national education initiative has been launched by the Hydraulic Institute to facilitate outreach programs in the United States to highlight the energy savings and costs associated with the systems. ?

SunBelt Coffee & Water, a provider of breakroom supplies and services, has received the 2004 Industry Appreciation Award by the Cornerstone division of the Jacksonville Regional Chamber of Commerce. ?

A.O. Smith Corporation is celebrating its 50th anniversary by awarding 240 employees at the Fabricantes de Componentes de Motrices in Juarez, Mexico with the President’s Safety Award. It is the longest running employee recognition in A.O. Smith history. ?

Waterite Technologies Inc., has opened a full line warehouse and sales office in St. Laurent, Quebec, a suburb of Montreal. The distribution center will serve as a service point for Quebec and areas east throughout Canada. ?

One billion drinking unsafe water, UN says
United Nations agencies (the World Health Organization and UNICEF) have issued a report showing that about one billion people are drinking unsafe water worldwide. Meeting the Millennium Development Goals outlines the risks to children in developing nations, brought on by dirty water and poor hygiene, and aims to serve as a measurement for the UN goal of halving the percentage of people around the world without safe water and sanitation by 2015.

Bacteria found in bottled water
Forty percent of commercial mineral waters are contaminated with bacteria and fungi, according to a presentation at the American Society for Microbiology in November. Dr. Rocus Klont of the University Medical Center at Nijmegen reported the findings after testing 68 commercial mineral waters, one tap water sample and one sample taken from a natural well. Bacteria could be grown in lab cultures from 21 of the samples. While Klont noted that the risk of disease to healthy individuals may be limited, immunocompromised patients, who typically receive bottled water during their care at hospitals because of its perceived safety, may be at greater risk of infection.

Engineers association offers water program
The American Academy of Water Resources Engineers, a subsidiary of the American Society of Civil Engineers, has introduced a specialty certification program for water resources engineers. The certification is a voluntary, post-license credential that provides recognition of advanced expertise in a technical speciality, experience and strong professional ethics in the field. For more information, www.aawre.org

Disinfection market to skyrocket by 2010
Markets for water disinfection, water purification and securing water quality with other methods are growing worldwide between 8 and 25 percent, depending on the sector, and will increase dramatically before the turn of the decade, according to a new report from Helmut Kaiser Consultancy. The report attributes the growth, which it estimates will increase the market from $3.5 billion in 2004 to about $6 billion by 2010, to the result of declining water quality worldwide and the growing potential for molecular nanotechnology in the disinfection process. A copy of the report can be obtained at www.hkc22.com/water disinfection.html

IBWA announces 2005 officers
The International Bottled Water Association announced its 2005 officers, board members and executive committee members during the their annual convention and trade show at BevExpo 04 in Tampa, Fla. Steve Raupe, owner of Eureka Water Company Inc., was elected chairman of the board of directors while Phil Susterick, of Culligan of Brooklyn Park, Minn. was elected vice chairman.

Trinidad develops water master plan
MWH Soft Inc., a provider of water resources applications software, has been chosen by the Water and Sewerage Authority of Trinidad and Tobago to provide software support for the nation’s development of a comprehensive water facilities master plan. The modeling software will become the key to an overarching water resources management plan to better serve 1.1 million people in the Caribbean’s largest public utility.

PFAS found in Nordic organisms
A recently completed Nordic survey on environmental chemicals indicates high concentrations of perfluoridated alkylated substances (PFAS) in some mammals. The highest concentrations were measured in seals at the Danish and Swedish coast of the Baltic, in whales at Faroe Islands and in pikes at the Finnish coast near Helsinki. The chemicals were, until recently, regarded as harmless to the environment; however, in the late 1990s it was proven that PFAS chemicals had accumulated in organisms and have an adverse impact on mammal liver tissues.

Congress passes, postpones water bills
Before members of Congress wrap-ped their session in November, they passed several key water-related bills while others died without resolution. Among the salient bills sent to the White House were measures to reauthorize the CALFED program for restoring California’s critical waterways and a reauthorization of the 20-year-old Water Resources Research Act, funding the program at $38 million over five years. Nine of 13 spending bills were delayed, including those that fund the U.S. Environmental Protection Agency’s Clean Water State Revolving Fund and other Department of Agriculture water programs.

WateReuse draws hundreds
The WateReuse Association held its 2004 WateReuse Symposium in September, bringing together more than 400 technical water professionals to discuss direct and indirect potable water reuse. Included in the symposium were more than 80 technical presentations, exhibits from the latest in technologies and services and several specialty sessions including the 5th annual “To Drink Or Not To Drink” panel discussion on promoting reuse technologies in the United States. 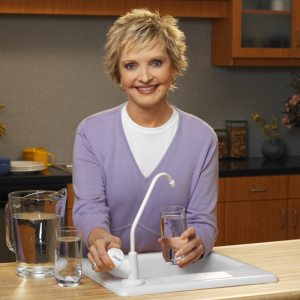 The RainSoft Division of Aquion Water Treatment Products, LLC, has tapped Florence Henderson to serve as their national spokesperson. Henderson, best known for her role as Carol Brady on The Brady Bunch, will represent the company in a series of national print ads and regional radio commercials. She will also be “front and center” in the creation of new dealer sales materials, the company reported and in public relations programs in the coming months. “Florence’s broad-based appeal will not only help us to solidify our reputation…but clearly reaches beyond to other consumer segments that we have identified through extensive market research and consumer focus groups,” said Richard Verson, the company’s marketing director.

WQA responds to lead exposé
Responding to an October 5th story in the Washington Post that documented lead contamination reporting issues in major U.S. cities, the Water Quality Association called upon consumers to consider adding a final barrier for the drinking water at the tap. While the association noted that most municipal systems meet Environmental Protection Agency guidelines, “consumers should be aware that the use of a (POU/POE) water treatment system can safeguard their drinking water to levels even more stringent than the compromise levels allowed by the USEPA.” The association recommends products certified by NSF, UL or the WQA to ensure quality purification, as well as installation by a Certified Water Specialist.

Bacteria put D.C. water in breach, EPA said
Officials from the Environmental Protection Agency and the city of Washington D.C. are reporting that bacteria levels in the city’s tap water exceed federal health standards for the first time since 1996. The sudden rise in bacteria, detected during a series of routine tests in September, likely resulted from the use of new water treatment chemicals intended to reduce the lead levels in water systems. The chemical, orthophosphate, may have shaken off a layer of rust and bacteria inside the city water pipes. At-risk consumers, including those with weak immune systems, the elderly and some infants, are advised to contact their doctors to determine if boiling water prior to drinking is necessary.

Using soil to filter river water
Researchers at Johns Hopkins University have found that soil alongside a river can remove dangerous microbes and organic material as water flows through it, working as a natural filter for drinking water drawn directly from a river. The technique, known as riverbank filtration, has been used indirectly in Europe for more than 50 years to improve the taste and smell of drinking water and would be beneficial to providing cleaner drinking water from rivers in the Midwestern United States, the researchers said.

EPA developing wastewater handbook
The Environmental Protection Agency is working with a variety of external groups to develop a handbook for water and wastewater operations. The Environmental Management System handbook, along with information from a steering committee of wastewater industry representatives and other experts, provides management processes and procedures that allow a utility to remain, control and reduce the environmental impacts of its facility operations.

Desal in San Francisco Bay
The Marin Municipal Water District approved a $1.2 million test plant to determine if desalting water from the San Francisco Bay is feasible for use as drinking water in Marin County homes. The plan includes a variety of water quality testing reviews to determine the usability of the desalinated water, as well as a comprehensive study of the environmental impact of the process on the bay and cost-benefit analysis to determine if long-term, expanded desalination programs would be beneficial.

Japan thirsty for Hawaiian water
Desalinated deep-sea water from Kona, Hawaii is the state’s fastest growing export with demand soaring in Japan.  The $6-a-bottle water is sucked up from thousands of feet below the Pacific Ocean and has gained enormous popularity in Japan after being marketed as a healthy, mineral-rich drinking water. Koyo USA Corp., which is already producing 200,000 bottles a day, says it can’t keep up with demand and other Japanese, Hawaiian and mainland U.S. companies are planning to sell the product in Japan and the United States.

Bangladeshi arsenic-free drinking water
The Barind Multipurpose Development Authority is implementing a plan to provide arsenic-free drinking water to villagers facing water shortages during the dry season. Prime Minister Begum Khaleda Zia inaugurated the water supply program at Chanduria Village in October. According to officials, the supply of potable drinking water is expected to improve the health of rural people by preventing common diseases being caused by the shortage. Through the project, infrastructures are being installed in 250 villages in three districts. Seventy installations have already been completed.

Uganda competes for water facility
Uganda is competing for a €250 million water facility from the European Union and its member states. The African Caribbean Pacific (ACP) and the EU countries agreed upon the competitive facility earlier this year, arising from the EU and its member states’ decision in March 2004 to increase efforts to assist in achieving the millennium development goals in water and sanitation through the establishment of a special water facility. Speaking during the opening of the fourth Joint Government of Uganda and Donor review of the water sector at the International Conference Centre, the Swedish Ambassador to Uganda, Erik Aberg, said a call for proposals would be launched shortly.