The PWN Water Supply Company North Holland (PWN) has announced the opening of its state-of-the-art water treatment facility in Andijk, the Netherlands. The plant is the first of its kind in the world, designed to combine UV disinfection with UV oxidation to combat microorganisms and micropollutants potentially present in the source water. The UV oxidation process is based on the generation of hydroxyl radicals via the UV photolysis of hydrogen peroxide.

“Our testing has demonstrated unequivocally that UV oxidation technology is highly effective in destroying micropollutants such as pesticides, herbicides, endocrine disruptors, pharmaceuticals and algal toxins and at the same time eliminating many pathogens including E. Coli, bacteria, viruses, Cryptosporidium and Giardia,” said Peer Kamp, Director of Research and Development for PWN.

Under an agreement announced in April 2001, PWN and Trojan Technologies have been working together piloting and testing the technology. The first two phases, consisting of prototype development and the optimization and testing of a UV treatment system to destroy micropollutants found in contaminated drinking water supplies, were completed successfully. That facilitated the completion of the third phase, full scale equipment delivery. The first two phases enabled the project partners to determine the sizing and design of the UV equipment required to achieve the target levels of contaminant reduction.

“We are extremely pleased with the results of our collaboration,” said Joop Kruithof, Chief Scientist at PWN. “The system provides an extremely effective barrier to many types of contaminants, and we believe it represents the future of water treatment in Europe and in other parts of the world.”

The installation will ultimately treat more than 95,000 cubic meters (25 million gallons) of water per day, providing drinking water to approximately 500,000 people. This would require large contact basins in which to perform treatment using ozone. However, the UV system fits into a very compact footprint (approximately seven meters by seven meters inclusive). That means significantly reduced building capital costs and more efficient use of land area—important considerations for any locale.

The system employed at the facility uses a process known as UV oxidation, where hydrogen peroxide is added to the water. The water is then treated with UV light. In addition to the direct breakdown of some compounds by UV light, UV oxidation produces hydroxyl radicals, powerful oxidizers that break down and eliminate contaminants. 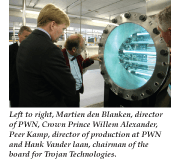 A significant advantage of the process used at PWN is that it does not form bromate. Bromate is a regulated disinfection by-product formed from the reaction of bromide with ozone. It is a suspected human carcinogen. Although the current regulatory limit of bromate in drinking water is 10 parts per billion (ppb), the U.S. Environmental Protection Agency’s (EPA) Integrated Risk Information System (IRIS) database gives a one-in-a-million cancer risk concentration (the level on which most regulations are based) of 0.05 ppb. Bromide is present in many water sources worldwide and the formation of bromate from bromide presents a significant challenge for users of ozone in water treatment. Throughout North America and Europe, researchers have detected trace amounts of potentially carcinogenic substances in water supplies. These substances include N-nitrosodimethylamine (NDMA), 1,4-dioxane, pesticides, pharmaceuticals, personal care products and potential endocrine-disruptor compounds.

“There is an increasing recognition that many water sources contain trace contaminants that cannot be removed by conventional technologies,” said Marvin DeVries, President and CEO of Trojan Technologies, noting that today, “The need for municipalities to provide multiple barriers to microorganisms and chemical pollutants is becoming more acute.”

In Europe, the European Environment Agency (EEA) reports that source water supplies in many European countries regularly exceed the maximum pesticide concentration of 0.1 ppb. The fact that it can take years for pesticides to seep into water supplies, combined with heavy historical use of pesticides, suggests that the problem is only just beginning to manifest itself. More and more, pesticide contamination is forcing water providers to find new water supplies or perform treatment in order to provide safe drinking water.

About Trojan Technologies
Trojan Technologies designs, manufactures and sells UV systems for municipal wastewater and drinking water facilities, as well as for the industrial, commercial and residential markets. The company also provides UV treatment for the removal of certain chemicals from water. With approximately 3800 municipal facilities in more than 50 countries using its technology, Trojan has the largest installed base of UV systems in the world. Trojan has won over CDN $40 million (Euro 26 million) in contracts since it entered this market four years ago. Headquartered in London, Ontario, Canada, the company also has offices in the U.K., Germany, Netherlands, Norway, Spain, and the U.S. For complete background information on Trojan Technologies, please visit the media center in the company web-site at www.trojanuv.com or call Diana Cunningham, Manager of Corporate Communications and Investor Relations, Trojan Technologies, Inc., at (519) 457-3400