An Oasis in the Desert: Water & Environmental Systems Est. 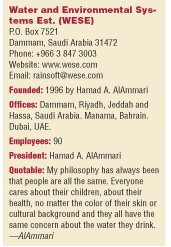 Founded in March 1996, Water & Environmental Systems Est. (WESE) has quickly become one of the largest and most influential residential water dealers in the world, bringing new products to Saudi Arabia and changing the way all industries do business in that Middle Eastern country. WESE has entered into a strategic alliance with RainSoft of the United States, a leading brand of top-quality equipment that treats, purifies and softens water for homes and businesses.

Hamad A. AlAmmari, the founder and current president of WESE, established the company in Dammam after traveling to the United States and learning about RainSoft Water Treatment Company dealership opportunities. Supplying RainSoft products under the WESE name, the firm supplies the residential, commercial and light industrial markets in Saudi Arabia, Bahrain and United Arab Emirates with RO systems, filtration equipment and other wastewater technologies.

WESE was rated among the top 100 small enterprises in the country in survey that included over 13,000 small and medium businesses in Saudi Arabia. The rating was carried out 2001 by the local branch of Citibank and was based on growth potentials, market share, and market opportunity of the surveyed business. 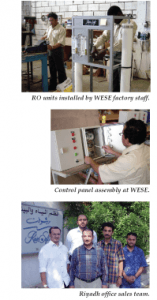 Today, the company has four offices in Saudi Arabia (Dammam, Riyadh, Jeddah and Hassa) and has quickly become a destination point for those seeking ways to provide higher quality drinking water to residential customers, municipalities. Water & Environmental Systems Est. has also ventured into the realm of manufacturing: commercial, industrial and large residential RO units are produced at its factory in Dammam.

In mid 2000, after it was granted an industrial manufacturing license by the Ministry of Industry allowing it to manufacture commercial RO systems, WESE signed a license agreement with Aquion L.P. to manufacture brackish water reverse osmosis plants using the brand name RainSoft.

A model for success
While a typical, aggressive marketing campaign for POU/POE systems is the norm in many United States-based dealerships, in a country like Saudi Arabia such a practice often runs counter to cultural norms.

“We are a very conservative society,” Al-Ammari says. “When we started making sales calls at people’s home, I think we took a lot of people by surprise.”

But the strategy worked and within two years of opening, Water & Environmental Systems was the largest dealer of its kind in Saudi Arabia and the largest international RainSoft dealer in the world.

“Today, many different industries in Saudi Arabia have adopted our techniques,” Al-Ammari says. “Salespeople from all sorts of companies are now selling the way we do, and they are growing the way we have too.”

In a country where softeners systems and other filtration equipment are often seen as a luxury, AlAmmari and Water & Environmental Systems did more than simply model their marketing strategies on a traditional U.S. approach: they modeled everything else on U.S.-based RainSoft offices as well.

“I went to the United States, to Chicago to attend RainSoft University and Denver, to be educated by RainSoft on becoming a dealer,” he says. “So when it came time to organize the sales floor and the office spaces, I simply based on what I learned in the Denver office and at RainSoft factory.” AlAmmari also added “we are very active in our community and have participated in a lot of charity events, our sense of community obligation had made us participated in water conservation drive sponsored by Government Water Authority, we have distributed hundreds of water saving showerhead at no charge to our client”.

The result, Al-Ammari says, is a successful model that has helped to make residential water purification affordable to the average middle class Saudi consumer and purified water a staple for a healthy lifestyle in the Middle East. It’s also translated into phenomenal growth for a company that is still less than a decade old. In addition, to providing service for more than 6,000 customers, WESE has quickly evolved into a more prominent role for RainSoft in the Middle East.

Expanding markets
Because of his tremendous growth and success in Saudi Arabia, RainSoft has tapped Al-Ammari to help the corporation expand its dealership base throughout the Middle East. Al-Ammari consults with would-be RainSoft dealers in the region, using his business as a model for synthesizing the American product into the Arab marketplace. The method has been wildly successful in the decade since Al-Ammari began and in addition to the six WESE offices in the region, RainSoft has established successful dealerships in Qatar and Kuwait. Moreover, he recently expanded Water & Environmental Systems, establishing offices in Bahrain and Dubai, where RainSoft dealerships were failing under third-party management.

The company has also expanded its line of light industrial equipment and services as a supplement to its residential and commercial client activities. Water & Environmental Systems, currently has about 6,000 customers at its six offices in three countries. About 75 percent of that business is residential and commercial customers, according to AlAmmari.

The remaining 25 percent is industrial purification, desalination and other water treatment services, AlAmmari says. The company also has an environmental division dedicated to the development of wastewater treatment technologies for small local municipalities and other industrial uses.

“Our country is vast and with a lot of ruler area, we feel there’s a growing market for these types of services and like the residential water treatment industry, there are not a lot of companies there to serve the needs,” AlAmmari says. “And definitely not very many doing it as effectively as we do.”

Conclusion
In the end, the key to Water & Environmental Systems’ success has had far more to do with an overarching philosophy than simply adopting a traditional American business model, Al-Ammari says. Instead of heralding the way that his company has become a model itself for success in Saudi Arabia, AlAmmari humbly credits the success to something far simpler.

“My philosophy has always been that people are all the same,” AlAmmari says. “Everyone cares about their children, about their health, no matter the color of their skin or cultural background and they all have the same concern about the water they drink.”