Summary: Recent research has documented that the coal and coconut shell-based activated carbon used in granulated activated carbon (GAC) water filters often discharges significant amounts of arsenic (As) and antimony (Sb), at least when newly installed. To determine if this may translate into a concern for GAC filter manufacturers, retailers and end-users, four undersink and one pitcher-type activated carbon drinking water filters were tested for extractable arsenic under NSF 42 (which is very similar to NSF 53). Specifically, we sought to determine whether the filters discharged arsenic levels under NSF 42 exceeding the Environmental Protection Agency’s Maximum Contaminant Level (MCL) for As in drinking water and to better understand possible health risks posed by the use of these filters.

For some time there has been concern over the levels of extractable arsenic and antimony found in activated carbon products. The reason for this concern is that activated carbons are widely used in municipal scale as well as point-of-use/point-of-entry drinking water treatment systems. In 2001, due to better understanding of health risks posed by As exposure, the EPA lowered the MCL for As in drinking water from 50 ppb to 10 ppb and set the maximum contaminant level goal at zero. Compliance with this rule won’t be mandated until January 2006, and some public drinking water systems may be granted longer to meet it. Because of the health risks associated with As in drinking water at low concentrations, though, any potential source ofAs discharge merits study.

In response to concern over the amounts of As and Sb that could potentially be extracted from activated carbon during drinking water treatment, a major processor of GAC for extruded carbon block filter applications, KX Industries, published a multi-year study1 on the subject. The results suggested there’s reason for concern regarding this issue and that levels of extractable As and Sb vary widely depending on the type and brand of activated carbon, even between production lots.

Health risks from arsenic
Arsenic has been linked to many adverse health effects most notably cancer and reproductive problems. Arsenic is an established cause of skin, bladder, and lung cancers and has been associated with cancers of the liver, kidney, prostate and colon2. The most sensitive endpoints in terms of risk assessment are lung and bladder cancer2. In 2001 the National Research Council published its update to the “1999 Arsenic in Drinking Water Report” in which current knowledge of the health risks posed by As in drinking water were summarized. Table 1 gives results from the council’s risk assessment for lung and bladder cancer, believed to represent the best currently available research on the subject. The risk is surprisingly high. For example, there’s approximately a one in 1,000 excess lifetime risk (i.e. a predicted 1000 extra cases per million population over a 70 year period) of lung and bladder cancer from exposure to As in drinking water at a concentration of only three parts per billion. Given these widely-accepted cancer risks from even very low As concentrations, the new MCL of 10ppb was intended as a compromise between an ideal level of public health protection and the very real technological limitations and economic burdens of further reducing As levels in water. It should be noted, however that there is a considerable range of cancer risk estimates resulting from the council’s review depending on the exact assumptions of the dose-response model.

Arsenic in GAC
The multi-year study published by KX measured extractable arsenic in 39 grades of activated carbon from 19 manufacturers, selected by the manufacturers to contain the lowest possible amounts of extractables. The researchers used the protocol for NSF 42 (Drinking Water Treatment Units-Aesthetic Effects) for extractable As as applied in the late 1990’s (it has since been updated, NSF)3 which calls for a single 72-hour extraction. This older method has been shown to be more rigorous than the current version of the same method, which calls for three 24-hour extractions. Side-by-side comparisons of the two methods indicate that roughly 50 percent lower As concentrations will be obtained by the new standard1. Table 2 summarizes the results of the extraction assays for As obtained in the aforementioned study. Eight of the 20 bituminous coal grades and three of the 19 coconut shell grades exceeded the MCL by more than 50 percent, suggesting a likely violation of the MCL under the most current NSF 42 method. In addition to this work they performed long-term testing of individual production lots of two grades of coal-based activated carbon over two years. Over the course of the two years levels of extractable As varied considerably but rarely exceeded 15 ppb. The study demonstrated appreciable quantities of and considerable variation in extractable As from different grades and production lots of activated carbon. It suggested that in order to accurately monitor the potential health risks, continual testing of production lots would be required.

Methods
To expand on the aforementioned study and to better understand actual health risks posed to consumers, we tested five POU drinking water filtration systems for extractable As based on the updated NSF 42 method. In addition, we also tested the two of these filters with the highest results under simulated aging conditions to observe how levels of extractable As change with time.

Four of the five filters selected for this study were undersink types (Models A-D), while the other was a pitcher-type filter (Model E). Exposure water for testing was prepared based on current versions of NSF 423. Filters were flushed according to manufacturer’s instructions, which consisted of five to 30 minutes of flushing, or soaking in the case of the pitcher-type filter. Twenty-four hours after flushing, a 50 ml sample was taken from each filter. The cycle of flushing, waiting 24 hours, and collecting a sample was repeated twice. The three samples from each filter were used to create a composite sample. Blanks, to account for As already present in the water, were collected from the exposure water. The As concentration was determined using hydride generation atomic absorption spectroscopy and by subtracting the As concentration of the blanks from the composite samples.

The two filters testing highest for extractable As were filled with extraction water, and after 24 hours a two-liter sample was taken. For the next four days two liters were flushed from each filter at 24-hour intervals. On the fifth day another two-liter sample was taken. This was continued for 20 days until there was a total of five samples. These samples also were analyzed for As using hydride generation atomic absorption spectroscopy.

The results for the five filters for extractable As based on NSF 42 are summarized in Table 3. While all of the filters discharged at least some As, none of them exceeded the 10 ppb MCL for As in drinking water. Although there was no exceeding of the MCL for As, the results still suggest possibly significant health risks based on the council’s cancer risks summarized earlier.

The two filters testing highest under NSF 42 (Models A and B) were then further tested for extractable As during a simulated aging procedure. The procedure attempted to account for reductions in levels of extractable As as the filters age and to represent potential As exposure over time more realistically than the NSF 42 methodology. The average per capita consumption of tap water for individuals in the United States, as estimated by the EPA, is one liter per day (L/day)2. Consuming 2 L/day is taken as approximately the 90th percentile and was chosen as the sample size for our health risk calculations. The NSF 42 method calls for samples from the initial bed volume of the filter, while in reality, as demonstrated in Table 3, most undersink filters have bed volumes of less than one liter. This suggests NSF 42 overestimates actual As discharge unless the internal volume is at least one liter. We would also expect water with a relatively shorter contact time with the activated carbon to contain lower levels of extractable As. 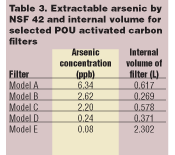 Results over time are given in Figure 1. By the end of the testing period both filters had As concentrations below one ppb. If we take these final concentrations to represent As concentrations in drinking water resulting from long-term use of the filters, extrapolating linearly from the dose-response curve implied in Table 1, we find that the excess lifetime lung or bladder cancer risks resulting from the Model A and Model B filters are reduced to approximately 2.5 incidences per 10,000 people for the U.S. population. It should be noted that virtually all other regulated drinking water contaminants are calculated to represent cancer risks lower than 2.5/10,000 at their respective MCL’s. It also should be noted that extractable As varies with time and that to more accurately estimate As exposure the level of extractable arsenic would have to be monitored over the entire service life of the filter. The 2.5 per 10,000 combined excess lung and bladder cancer risks probably represent an approximate upper limit of cancer risk resulting from the use of these two filters because it assumes that extractable As does not decrease further after the first 40 liters of simulated aging, and a 2.0 L/day water consumption. 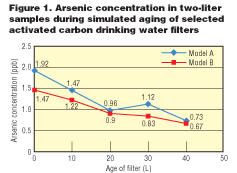 Conclusion
Analysis of the five POU type activated carbon drinking water filters indicated no exceedences of the 10 ppb EPA MCL for As in drinking water by NSF 42. The standard does not account for variability in levels of extractable As in activated carbon from various sources or from various production lots of activated carbon when testing filters. As suggested by a multi-year study analyzing extractable As of 19 manufacturers using GAC1, continuous regular testing of production lots of activated carbon would be needed to estimate and account for this variation. Because it doesn’t accurately portray drinking habits, As concentrations derived from NSF 42 are probably not as accurate for determining health risks as those developed from simulated aging studies. These results suggest that as filters age, levels of extractable As decline. Further research is needed to determine how levels of extractable As may continue to change over the course of the entire service life. Our preliminary experiments suggest that health risks resulting from As discharge via the filters are at least slightly elevated. The two filters discharging the most As resulted in an estimated excess lifetime lung and bladder cancer risk of about 2.5 cases per 10,000 people, while the three other filters probably result in excess risks of less than 1 case per 10,000 people. Still, because of significant quantities of extractable As initially found in most of the filters and the small sample size employed in this experiment, more research should be conducted in this area to better define the health risks that may be posed to the public. This is especially true considering the results of the experiments in the multi-year study1. Given that it’s now known that even very low As exposure is associated with elevated lung and bladder cancer risks, activated carbon filter manufacturers would be well-advised to make sure that the bulk activated carbon they’re receiving discharges the minimal possible amounts of As, perhaps by requiring random arsenic extraction tests for each bulk batch of GAC. 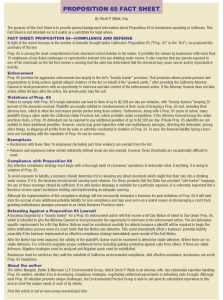 About the authors
Neil F. Gandy has a B.S. in Environmental Studies (Pollution Control) from the University of North Carolina at Asheville and is presently planning graduate studies in aquatic chemistry.

Richard P. Maas (corresponding author) has a Ph.D. in Aquatic Chemistry from the University of North Carolina and is the author of over 60 original published research studies in the drinking water field. Since 1987 he has served as the Co-Director of the Environmental Quality Institute at UNC-Asheville, which has long been recognized as one of the nation’s leading water research centers. Environmental Quality Institute, CPO #2331, UNC-Asheville, One University Heights, Asheville, NC 28804, maas@unca.edu, 828-251-6366.