Assuring Water Quality in the Eye of a Hurricane 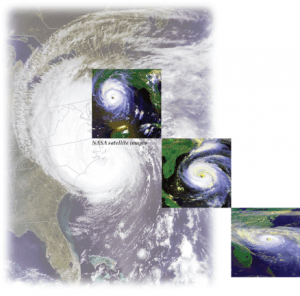 This year’s hurricane season hit hard, resulting in substantial property damage and loss of life. According to the Department of Health and Human Services at the Centers for Disease Control and Prevention (CDC) the vast majority of injuries during a hurricane are caused by flying glass or debris, but hurricanes impact all of life’s basic necessities, including food, water and shelter1. During such environmental emergencies, many questions circulate in the water treatment industry regarding tap water quality, boil water advisories, and the efficacy of point-of-use systems for water treatment.

Toxic floodwaters
During times of heavy rainfall and flooding, such as that experienced by Florida and other coastal and inland U.S. cities impacted by this year’s hurricane season, water treatment plants may not be operating to their optimal capacity, if at all. Storm damage and flooding can lead to contamination of water distribution lines, groundwater wells, household surfaces and food products. Floodwaters may contain a variety of contaminants from overflowing sewage systems and agricultural or industrial wastes and are generally assumed to be plagued with microbial pathogens and chemical toxins. Therefore, anything that has been in contact with floodwaters needs to be cleaned and sanitized. Non-porous surfaces and children’s toys can be disinfected with a dilute bleach solution, however porous materials may have to be discarded if they cannot be effectively decontaminated.

Reducing health risks associated with contaminated drinking water supplies requires consideration of how that water is used not only for drinking (including ice consumption) but also for cooking, produce cleaning and food preparation, dishwashing, hand washing and other personal hygiene uses such as brushing teeth and showering. According to the U.S. Environmental Protection Agency (USEPA), drinking water wells more than 10 years old or less than 50 feet deep are likely to be contaminated during a flood event2. Therefore, private drinking water wells should be disinfected followed by bacteriological testing. Swimming pools and hot tubs may also need additional treatment to achieve safe disinfectant residuals.

Boil water advisory, boil water alert
Thousands of boil water advisories are issued each year in the United States. Generally, they are precautionary measures in the event that the water supply might have been contaminated following a known pipe breakage and repair, or a noted pressure drop. Pressure drops in the system are indicative of a compromise in product delivery in the distribution system. A decrease in chlorine residual is also a cause for issuing a boil water advisory. Typically, advisories remain in effect until the water can be tested for bacterial contamination, which generally requires an additional 24 hours.

A boil water notice differs from an advisory in that there is a known contamination event where the water is shown to be microbiologically compromised. Boil water alerts are issued when the monitored water system exceeds national standards for coliform bacteria, used as indicators of treatment efficacy or fecal contamination. Standards may be exceeded either as an acute spike in bacterial populations or as a preponderance of positive samples.

In a potential emergency situation, like the recent hurricanes, a boil water advisory would likely be issued prior to the storm. This is a precautionary measure in case communication channels are compromised during the storm where public notices would not reach affected individuals. After subsequent testing, the advisory would either be lifted (no evidence of contamination) or changed to a notice (coliform bacteria present at levels above federal or state standards) until treatment could be rendered.

Whether an advisory or an alert is issued, any water used for drinking or cooking should be treated to be sure it is safe. There are a variety of options available for treating contaminated water. Treatment of water found to be biologically contaminated should include the purging of household faucets, coolers and ice from ice machines after the alert is lifted and before resuming use. Likewise, most point-of-use (POU) water treatment devices should be serviced and thoroughly sanitized before resuming use.

Emergency Water Treatment Options
To prepare for the possible event of an emergency, it is advisable to store supplies for treating water, such as equipment for boiling or chlorine or iodine tablets (Table 1).

Because the effectiveness of chemical water treatment is related to temperature, pH and turbidity of the water, boiling is often the most foolproof method and recommended under the broadest range of conditions. In addition, boiling is effective against viruses, bacteria and protozoa, but protozoa are not killed by common chemical treatment options (i.e., chlorine or iodine).

But, what if you are unable to boil the water? What if the water is from a highly turbid source, which reduces the efficacy of chemical treatments? In extreme conditions, crude methods of filtration, using common household supplies such as newspaper, filter paper, gauze and cotton cloth, may also help to reduce pathogen transmission. Research shows that this method, along with chlorine treatment can produce an emergency potable water source from snow or rain3.

POU treatment instead of boiling?
We know that a variety of common events as well as natural disasters can compromise drinking water systems and that boiling water offers a simple and certain means to protect consumers against biologically tainted water. What is less certain is the ability of POU treatment systems to substitute for boiled or chemically treated water.

In the case of minor intrusion events, decreased chlorine residual, or possible low level microbial contamination, POU systems designed for the removal of viruses, bacteria and protozoa are effective safeguards and have been recommended by the EPA and CDC for additional protection for immunocompromised populations. Not all systems, however, are designed for removal of all the aforementioned groups of organisms. In fact, the majority of consumers that opt for additional treatment at the tap utilize equipment designed for improving the taste and odor of the water, not removing microbial pathogens. Many systems on the market are not certified for cyst (i.e., protozoan) removal or the elimination of other microbial pathogens.

Knowledge about your POU device capabilities is essential, but even with systems designed for removal of microbes, there are still uncertainties. In emergency situations, it is unlikely that consumers will have knowledge of their source water quality characteristics. Other uncertainties with equipment design, the filter life capacity, etc. make it nearly impossible to determine the expected efficacy of the unit in an unusually taxing scenario. During floods, hurricanes or other disasters, the quality of the water may dramatically change, altering the efficacy of POU treatment device.

Recognizing the water purification needs of governmental, industrial and consumer groups, the EPA developed the “Guide Standard and Protocol for Testing Microbiological Water Purifiers”4. The protocol was designed for determining the ability of POU devices to purify waters of unknown quality, by setting up worse-case scenario waters (i.e., high turbidity and variable pH values) and heavy contaminant loads of bacteria, viruses, and protozoa. Units were also subjected to a variety of stagnation periods. POU devices that passed the test could be recommended for backpackers and military field personnel and would be useful for some foreign travelers and under emergency flooding events or other natural disasters. The protocol proved to be highly stringent, however, allowing only a few POU units to pass. 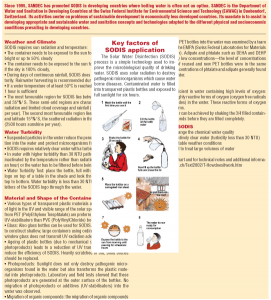 Only units claiming to remove pathogens or inhibit growth of microorganisms, that contain regulated contaminants (i.e., iodine, silver, etc.) are required to register the product with the EPA, however, such a registration does not imply EPA approval or the unit’s ability to achieve it’s stated purpose. Manufacturers can voluntarily seek independent, third-party testing (i.e., from WQA, www.wqa.org; NSF, www.nsf.org; BioVir Laboratories, www.biovir.com) of their product to evaluate performance claims, including EPA Guide Standard and Protocol testing. Products with NSF certification (for a complete list, contact NSF) have met a specific set of standards. However, these standards do not take into account worse-case (i.e., emergency) water conditions.

Better Safe than Sorry
Ultimately, it is best to boil your water in accordance with a boil water alert whether you have a POU system in place or not. Determining the theoretical life of a filter or POU system is difficult given the uncertainties of the source water quality and the characteristics of the water supply. Boiling, on the other hand provides a simple and certain means for eliminating harmful microbes from the water supply.