Introduction
Historically, winery wastewater has been either disposed of by obsolete and polluting methods like septic tanks, leach fields and ponds, or tank stored on-site and treated off-site. Winemakers not connected to municipal plants have generally shown a remarkable lack of inclination to treat their wastewater with effective technologies. Apart from specific cultural reasons, the lack of fiscal and economic incentives by governments may be partially to blame for this state of affairs.

Ontario is the largest wine producing region in Canada and the fourth largest wine producer in North America. The microclimate of the Niagara Peninsula and an effective use of biotechnology have made possible the emergence of more than 110 wineries throughout the province. Most of the Canadian wineries produce less than 10,000 L/day of wastewater. The wastewater is stored in tanks and hauled to a municipal plant, stored in ponds, or discharged to leaching beds of uncertain efficiency. However, the demand for prime land, the increase in municipal fees and expansion capacity is forcing many winemakers to seek effective solutions on-site.

As prime vineyard land becomes increasingly expensive, using less construction space to deal with the treatment of wastewater is becoming a technical and economic challenge. In addition, rising wine production and operating costs are inducing wineries to treat their wastewater on-site. Unfortunately, the wastewater treatment technologies presently available are either inefficient or land intensive. Economic analyses performed on the use of a compact and effective technology like those evaluated herein show a payback period of four years or less and a life cycle of over 25 years.

California’s recent tightening of winery wastewater treatment and disposal requirements and third party concerns are indicators of future developments in North America. The industry’s leading publication for wineries and growers, Wine Business Monthly, stated in its September 2002 issue that “… Business is not as usual. Historical winery practices, in particular land-based wastewater treatment and disposal systems, are being forced to change due to development and environmental concerns associated with organic, suspended solids, nitrogen and hydraulic loadings, as well as odors.”

Testing procedure
The system was installed between August 2003 and January 2004 in a well-know winery located near St. Catharines in the Niagara Region of Ontario. A certified independent laboratory monitored system performance. An engineer assured that the proper operating conditions regarding the quality and quantity of the influent, mechanical maintenance and protection against the seasonal low temperatures were satisfactory.

The components
The unit tested was generically referred to as an active biological contactor (ABC). Its design is based in the maximization of the oxygen mass transfer processes observed2,3,4,5 in fluidized bed bioreac-tors. In addition, they incorporate the characteristics of nitrification in RBCs.6,7 The plant consists of a primary clarifier and microbubble aeration section, a rotating biological contactor (RBC) with enhanced interfacial area, and a secondary clarifier with micro-bubble aeration section. The assembly is both compact and sturdy and due to its modular configuration a plant can be progressively expanded as the needs arise. This flexibility is not available with processes like activated sludge. 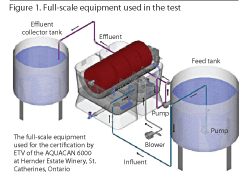 The RBC placed above the micro-bubble sections is designed in four stages or sets of closely spaced circular disks of polypropylene (Figure 1). The disks are supported by a horizontal rotating steel shaft driven by a variable speed motor. The disks are 40 percent submerged in the wastewater that flows continuously through them. The main features of the tested unit are shown in Table 1—the experimental facility consisted of an ABC, a feed tank and an effluent collector tank.

Operation of the unit
A 9,540-liter feed tank was filled up with high strength wastewater effluent from the different phases of wine production. The pH that ranged from 3.9 to 9 was adjusted to neutral values only for very acid influents. In some cases, not even pH corrections took place. The wastewater without any additional pre-treatment entered the ABC unit into the clarifier and the microbubble section. Next the flow moved into the RBC where biochemical oxygen demand (BOD), total Kjeldahl nitrogen (TKN) and ammonia were further degraded. Steady state was achieved four weeks after the start up of the system when a biofilm layer appeared on the surface of the media of the RBC. Finally, the flow entered the final micro-bubble section and the treated wastewater was pumped to the collector tank. As the water went through the ABC unit, samples of water were 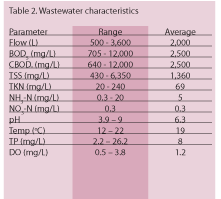 collected at the inlet and outlet of the unit. These samples were taken and analyzed for BOD, total suspended solides (TSS), TKN, TP, NH3, pH, dissolved oxygen (DO) and temperature.

Table 2 exhibits the ranges and average concentrations of the influent treated. To achieve consistently high removal in the absence of virtually any pre-treatment or post-treatment confirms the robustness of the process. Indeed, the addition of another unit in series or a polishing stage will produce an effluent capable of meeting the stringent criteria applied to tertiary treatment for discharge to surface waters. 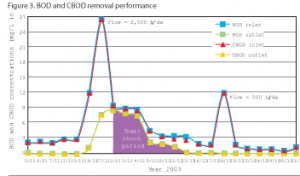 A graph of the percent BOD removal versus organic load is shown in Figure 2. 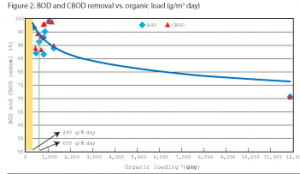 Figure 3 shows the performance of the unit between early November 2003 and the end of December 2003. Curves of the variation of the influent and effluent show three periods. The first goes from Nov. 5 to Nov. 19 where the percent removal ranges between 92 and 98 percent. After that period, high strength wastewater with a BOD of up to 27,000 mg/L is fed to the unit. On November 2, the unit experienced a toxic shock from wastewater containing calcium hypochlorite (HTH). The exceedingly high concentration of chlorine partly destroyed the normal growth of the biofilm and the BOD removal was insignificant. The result of the impact of the bleach on the biofilm is shown in 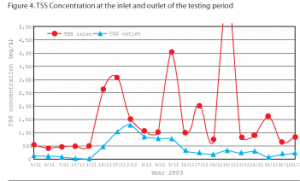 state performance removing an average of 93 percent of BOD and CBOD.

Total Suspended Solids Removal
Figure 4 shows the TSS concentrations measured at the inlet and outlet of the ABC for the entire testing period. From this figure, it can be seen that between Nov. 12 and Dec. 16, 2003, the TSS at the outlet increased coinciding with the toxic discharge. Previous to the toxic discharge, there is a sharp increase in the organic load. These results are related with the results observed in Figure 4 where the BOD and CBOD removals decreased as a result of the toxic shock and the high organic load occurred in the same period. The performance of the unit based on statistical data with a 95 percent confidence level is summarized in

About the author
Manuel Alvarez Cuenca, Ph.D.,P.Eng. is the President of Ecotechnos Inc. (www. ecotechnos.com), Toronto, Canada. Ecotechnos designs and manufactures advanced wastewater treatment units for industrial and domestic wastewater for small and medium sized business primarily in the viniculture, dairy and agriculture industries. He has more than 30 years of experience and has published numerous articles and treatises, including a book on fluid technologies. Cuenca is a professor and director of the Water Treatment Technologies Laboratory at Ryerson University, Toronto, and a recipient of the Canadian Ministry of the Environment’s Global 2004 Award for Aquacan 5000 for the treatment of winery wastewater.