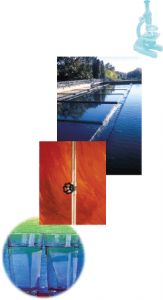 The drinking distribution system is a source of concern with regard to contamination of water during delivery and regrowth of microorganisms surviving treatment. The natural presence of organic matter in water offers a feeding ground for bacteria that can colonize on distribution pipe interiors, forming biofilms that protect and allow growth of the microbes, some of which are associated with adverse health effects in humans. Balancing the risks and benefits of various drinking water treatments to minimize biofilm formation has proven difficult. In some cases, solving one problem means creating another.

Distribution woes
Disinfection of drinking water does not produce a sterile product. Bacteria can survive the treatment process and utilize nutrients in the water, resulting in growth and regrowth in the distribution system. Bacteria can attach to the surface of distribution pipes where they form a biofilm. Biofilms are clusters of organic and inorganic materials that collect in pipes, harboring and protecting bacteria from additional treatment efforts. Biofilm bacteria can produce a gelatinous agent that aids in the adhesion and sustainability of the biofilm itself. In the biofilm, microorganisms create their own microcosm, where they can utilize food and continue to proliferate to much higher numbers. In addition, other organisms can attach to the biofilm and share in the protective properties. Legionella and Mycobacterium avium complex (MAC) are two organisms that are frequently isolated from biofilms and are a concern due to their known adverse health effects.

A smorgasbord for bacteria
It is well known that the primary factor contributing to bacterial regrowth in the distribution system is the availability of nutrients in the water. Other factors also play a role, including temperature, residence time and the efficacy of disinfection. Nutrients in water are essentially organic compounds. Varying compounds are differentially available to microbes for utilization as an energy source. Those primarily associated with bacterial growth are known as labile dissolved organic carbon, biodegradable organic carbon (BDOC) or assimilable organic carbon (AOC).

The presence of MAC organisms in source waters often correlates with turbidity. Although water treatment is effective at reducing MAC, levels in distribution systems are an average of 25,000-fold higher than levels at the treatment facility, suggesting growth in the distribution system. Furthermore, MAC levels are positively correlated with AOC and BDOC levels, compounds known to “feed” bacterial populations1.

Waters with high levels of AOC and BDOC (i.e., >150 µg/L and >0.5 mg/L, respectively) entering the distribution system should be considered for further treatment as control of biofilm development and bacterial regrowth is becoming recognized as an important aspect of water quality. General bacteria (i.e., HPC bacteria may be prevented from growing even in nonchlorinated systems when AOC levels are maintained below 10 µg/L. Coliform bacteria in chlorinated water were prevented from growing at AOC levels <50-100 µg/L. To achieve these quality levels, a high degree of treatment is often necessary involving processes such as coagulation, activated carbon application, biological filtration or membrane processes6.

Improved monitoring
Monitoring water for the presence of nutrients aids in the determination of water quality at the tap, with respect to regrowth organisms. Since AOC is known to provide stimulation for bacterial growth in the distribution system, it is a common parameter to monitor for the regrowth potential in a particular system. To detect AOC, a standardized method known as a bioassay is used. Although there are many variations to the AOC bioassay test, the conventional AOC method is to add a known level of bacteria to a water sample and allow the population to grow to exhaustion of the available nutrients (i.e. carbon) present. Once the nutrient source of the water is depleted, the level of bacterial growth is measured and related back to the original nutrient concentration. The method was first developed for drinking water quality monitoring in 19825. The test is quite simple except that specific waters must be evaluated for potential interferences, such as residual disinfectant, copper sulfate inhibition, and elevated pH levels in lime-softened waters. Therefore, adjustments using disinfectant neutralizers, chelating agents and pH buffers may be necessary for some source waters.

Within a short time, the original method was modified to utilize two bacterial species, Pseudomonas fluorescens strain P-17 and Spirillum strain NOX. These bacteria produce a natural epifluo-rescence and can be detected due to their specific light-emitting qualities.

Initially, the AOC test, utilizing plate count bacteria required an excess of eight days to complete, providing only historical water quality data. The use of epifluorescent luminescent assays reduced detection times to five days3. Most recently, scientists have genetically altered the AOC detection bacteria, Pseudomonas fluorescens strain P-17 and Spirillum strain NOX, and selected those with high luminescence activity and increased sensitivity in predicting AOC levels2. This new method reduces the assay time to two-three days and is likely to be modified for automated analysis in the near future. Others are working on “real-time” analysis of AOC, requiring one-two hours of incubation prior to measuring biological luminescence. Although promising, information on the validation of this method in drinking water samples is not currently published (CheckLight Ltd., Qiryat-Tiv’on, Israel; http://www.checklight.co.il).

Balancing treatment efficacies
Water treatment utilities are concerned about the formation of chlorine disinfection by-products (i.e., trihalometh-anes—suspected carcinogens and linked to birth defects, miscarriages and stillbirths) and are interested in balancing the need for microbial disinfection with the minimization of by-product formation.

As an alternative, ozone, a powerful disinfectant and oxidizing agent, is being used in some water treatment applications. Despite its effective disinfecting properties, ozone can convert large organic molecules in water to smaller molecules (i.e., increasing AOC or BDOC) that are in turn more available for bacterial use and stimulate regrowth of bacteria in the distribution system. In fact, ozone has been shown to triple the AOC level. Likewise, methods of conventional water treatment including primary chlorination and UV irradiation can have a similar effect. To minimize this effect, biological filters aimed at reducing initial AOC and BDOC levels and/or the addition of residual disinfectants to reduce regrowth in the distribution system are often recommended.

Because of the concern over trihalomethanes and a possible false sense of security several European countries are opting to forego the use of residual disinfectants as a routine treatment and concentrate on maintaining the biological stability of water (i.e., balancing the levels of BDOC and AOC to control bacterial growth).

Overall the conditions that contribute to the growth of bacteria in the distribution system are complex. They are also specific to varying source water sites and water quality parameters. Colonization of bacteria in the form of biofilms occurs rapidly in distribution pipes and growth is exacerbated by the presence of high AOC and BDOC content, in addition to post-treatment contamination in the distribution system itself. With so many contributing factors, it is difficult to predict the quality of the water at the point-of-use. There are multiple sources of contamination to drinking water once it leaves the treatment plant and few options for protection. This fact is a driving force behind the need for point-of-use devices as an addition to the multi-barrier approach to drinking water treatment.