The Use of Distillation Technology in the Bottled Water Industry

Summary: Distillation is one of the most natural and efficient technologies available for purifying water supplies for use in the bottled water industry. Previously, cost was an overriding issue working against it, but with new designs also has come a more cost-efficient option for dealers. 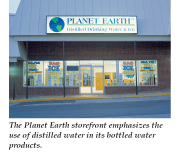 Distillation technology replicates the hydrological cycle found in nature, using the simple evaporation-condensation-precipitation model. Historically more expensive than the reverse osmosis (RO) process because of higher initial investment in equipment and the electrical power required to boil water, the latest distillation technology has closed the operational cost gap with RO.

In practice, many bottled water operators use a combination of methods to remove impurities from their source water prior to introducing it into the bottle-filling process. That’s because no one method can remove all impurities. Available methods include distillation, RO, activated carbon filtration, ultraviolet and ozone disinfection and ion exchange.

The most common single method of removing contaminants from source/feed water with the bottled water industry is RO with about 40 percent of U.S. bottlers using this process vs. an estimated 15 percent that use distillation. The other 45 percent of bottlers either don’t remove contaminants because they produce and market spring water or mineral water, or they use other technologies.

A matter of dollars and cents
Expense is likely the single most important reason that only about one in seven bottlers use distillation. The major cost factor is equipment. Operators can invest more than $100,000 in setting up a first-class distillation system while RO systems are about a tenth of that total. The cost of energy required to heat the water to boiling in the distillation process has historically made even the cost of producing a gallon of distilled water much more expensive than RO. New distillation technology has answered that challenge, as we shall see.

Distillation is broadly viewed as the single most effective method of purifying water. High quality water can be produced by distillation from virtually any municipal supplies, wells (bore holes) springs, lakes and rivers. Because of the extended boiling process, any microbiological contaminants, including Cryptosporidium, are killed.

While there are different types of distillers, they all operate on nature’s basic principles:

ME distillers are more simply designed. With no moving parts, there’s nothing really to wear out. Distillers with more than one boiler (effect) are designed to recycle the heat energy, which creates the steam in the first boiler to heat the water in the second boiler. A two-boiler unit produces twice the distilled water as a single-boiler unit for the same cost. A four-boiler unit produces four times the water, and a six-boiler unit will produce six gallons of water for the approximate cost of distilling one gallon of water.

Technical advances, as seen in the latest VC systems, allow many of today’s better commercial distillation systems to produce water to 1 part per million (ppm) total dissolved solids (TDS) at a fraction of the cost of earlier distillers. In fact, bottled water companies can offer very competitive prices on their products often equal to—or even less than—companies using RO systems.

“Initial investment is certainly higher for distillation equipment than for RO,” says Troy Krause, manager of Planet Earth, the leading bottled water company in Lincoln, Neb. “But the actual costs of producing a gallon of water using the newest vapor compression-style distillers is now about equal with a gallon produced by RO.” Distillation produces water at one cent per gallon. RO produces water at slightly less. Locally, Krause says, Planet Earth competes on an even field with its RO competitors: “In fact, our prices are often a little lower than theirs.”

While Krause thinks that, to the average customer, “bottled water is bottled water,” he adds, “there’s still perceived value of the product in the customer’s eye if they know it’s distilled. And, of course, some of our customers demand distilled for such uses as in scientific laboratories.
“Distillation gives us product differentiation,” Krause says. “All our competition uses RO so we can talk about the benefits of distilled water.”

Part of customer awareness
His salespeople are trained to emphasize that product differentiation, Krause says: “We tell them the benefits of distilled water include a better taste, a more consistent product, and distillation removes more impurities than RO… Another advantage to distilled water is primarily for ourselves. That we sell only distilled water assures us that we’re providing our customers with the best water possible.”

Krause says Planet Earth, like most other bottlers using distillation, first softens its feed water with an ion exchange treatment system before water enters the distiller. “This treatment removes a lot of the minerals that can create scaling and other corrosion within the distillers themselves,” he says. “We want to remove as much of such minerals and nitrates as we can up front, so we don’t have to deal with them in the distillers.”

Planet Earth also uses an activated carbon filtration system to “put a polish on our finished product to make it the highest quality water we can produce,” Krause says. “If our product water doesn’t test out at 1 ppm TDS, then we don’t bottle it.” By comparison, municipal water guidelines are a maximum of 500 ppm TDS. 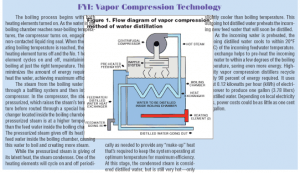 Conclusion
Distillation is nature’s way of removing impurities from water. While investment in equipment remains higher for distillation systems, the latest technology has lowered the actual cost of producing a gallon to about one penny per gallon. The answer is in the design of today’s energy-conserving distillation equipment.

About the author
Bruce Kucera is vice president of Norland International Inc., of Lincoln, Neb., a company that supplies complete bottled water operations to companies around the world. The company’s products range from turnkey bottling plants to a variety of components for the bottled water industry including distillers, bottle washers, fillers and cappers, blow molders and packaging equipment. Kucera can be reached at (402) 441-3737, (402) 441-3736 (fax) or email: bk@norlandintl.com