The RO Renaissance: Why the Technology Thrives in the Marketplace

Summary: Reverse osmosis often seems like it’s been with us forever. With its presence so widespread in the water treatment market, it’s a technology that’s easily overlooked. Here, the author explains why after five decades, RO is stronger than ever.

“Come gather ‘round people
Wherever you roam
And admit that the waters
Around you have grown…
For the times, they are a-changin’.”
—Bob Dylan,
“The Times, They Are A-Changin’ ”

Bob Dylan’s famous 1960s call to action still resonates powerfully today, especially in the water and wastewater treatment industry. But not necessarily in the way his lyrics suggest.

Over the past two decades, the world’s water supply and the technologies used to treat it have undergone significant changes. Due to widespread drought conditions, population growth, urban and suburban sprawl, and an increased presence of chemical and biological contaminants, however, the waters aren’t growing. They’re shrinking—or at least, access to potable water sure is. And the world is struggling to maintain a pure, potable supply for both municipal and industrial applications.

According to the World Bank’s estimates, by 2025, as many as 4 billion people—or one half of the world’s population—could live under conditions of severe water stress, especially in Africa, the Middle East and South Asia. One-sixth of the World Bank’s lending—approximately $3 billion per year—is currently devoted to water-related projects. In her book, Water Wars, expert Diane Raines predicts the growing shortage of clean water threatens to make water, even more than oil, the cause of political turmoil in the decades to come.1

Salt/brackish water
Adding to the challenge is the fact the majority of purification technologies typically used for treating surface and groundwater supplies—while they’ve become more economical—still aren’t efficient or cost-effective for desalinating salt water or brackish water, which are increasingly used as source water for municipal and industrial applications. Water and wastewater treatment experts know that change is necessary if the world’s water supply is to support future development and population growth.

First developed in the late 1950s as an economical method of desalinating seawater, RO uses a semi-permeable membrane to remove nearly all particulate matter—turbidity, bacteria, microorganisms, salts, proteins, asbestos, and even single molecules of the heavier organics—from water. With pores ranging from 0.0005 to 0.0000002 microns (µm), the membrane “catches” the majority of the impurities while allowing water to pass through, creating a purified water product. Of all the commonly accepted categories of membrane filtration systems—including RO, nanofiltration, ultrafiltration and microfiltration—RO removes the smallest-sized particles from water.

Despite the fact that RO membrane filtration has been recognized as the most effective form of membrane filtration for some time, it hasn’t been widely used until recently. The reasons are varied but have typically related, in the past, to high capital and energy costs and poor efficiency when compared with other available treatment technologies such as distillation. The higher energy cost arises from the fact that in order to remove the smallest-sized particles, RO requires a pre-determined level of pressure on the feed water stream to pass the purified water through the microscopic pores of the semi-permeable membrane (see Figure 1). 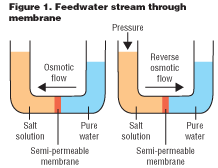 Enjoying the spotlight
Today, RO is experiencing a resurgence, thanks to advanced technology, lower costs and higher water quality demands. According to a recent study by The McIlvaine Co., a consulting and publishing firm, the U.S. RO modules and equipment market was expected to exceed $1.3 billion last year. The RO systems market is growing at an annual rate of 8 percent globally. In addition, desalination, one of the primary applications for RO, is expected to grow globally at an average of 11 percent from now until 2006. Here are some of the key reasons why this technology is suddenly back in the spotlight.

Thanks to new technology, the price is right: According to Bob McIlvaine, president of The McIlvaine Co., “Reverse osmosis never really fell out of favor; it just wasn’t the most efficient technology on the market. The big breakthrough today comes because of higher equipment efficiency, lower equipment costs and reduced energy usage.”

New RO pump technologies are far more energy-efficient than previous methods: Since RO is a cross-flow technology, some water passes through the membrane (as product water) and some flows past it (as reject water) carrying away impurities during the process. The new pumps, which are equipped with energy recovery devices, use the pressure and the flow of the reject water to help reduce the size of the pump/motor assembly required for the system, lowering the

In addition, recent advances with RO membranes that have higher tolerance to fouling, a higher rejection of dissolved solids and higher flows, allow plants to operate at lower costs and higher efficiencies. These improved membranes require less pre-treatment chemicals, smaller pump/motor sizes and fewer membrane modules to achieve the same output. In turn, this creates less energy waste and a longer membrane life span. This is key because the membrane component of an RO system can account for 20-40 percent of the system’s complete cost. The more frequently the membrane needs to be replaced, the more expensive the system’s operational cost becomes.

And that’s not all. With RO costs dropping in recent years, municipalities can provide a solution quickly without significantly raising taxes. Coincidentally, the lower equipment costs and reduced energy usage of RO comes at the same time that the costs of its most popular competing purification technology—distillation—are rising.

“The prices of distillation and RO used to be relatively similar,” said McIlvaine. “But the fuel sources for distillation have increased in price, and will likely continue to do so. Since distillation costs are rising and RO costs are continually dropping, RO is rapidly becoming the preferable solution for large-scale purification projects.”

Desalination
Unusually prolonged drought conditions have afflicted the western and southwestern United States, Africa, the Middle East and South Asia. In addition, increases in population and industrial waste have led to the release of a deluge of contaminants into the world’s groundwater. These and other conditions have created an urgent need for the use of RO systems. A dozen small RO desalination plants are currently in operation along the California coast, and over 20 more are in development.

“The drought and population growth, not to mention the proliferation of high-end resort communities in areas that lack adequate water sources, are causing us to outstrip our available water supply in many parts of the world,” said McIlvaine. “Increased contamination and the rise in fuel costs have raised the expense of purifying water from existing surface sources. Thanks to the reduction in the operating cost of RO systems, desalination of sea water has become a much more viable, affordable option for improving the available water supply.”

Greater public awareness through the media and the U.S. Environmental Protection Agency has created a sense of urgency among the public to improve the quality of its water. The public has greater awareness of illnesses—ranging from varied cancers to Legionnaire’s disease—that are associated with biological and chemical contaminants, which can leak from local manufacturing plants into a community’s groundwater.

In addition, the public is aware of RO because of a surge in residential or point-of-use/point-of-entry (POU/POE) water treatment systems that are directly available to them through retailers including Lowe’s, Sears and Home Depot as well as the many U.S. franchise and independent dealerships across the country. The public’s increased use of steadily advancing home water treatment technologies has sensitized them to water quality issues at the municipal, regional and global levels.

The consumer public has proved that water quality is a key concern, and that they’re willing to pay extra for non-municipal sources of drinking water. Bottled water is now second only to soft drinks as the largest-selling beverage type globally. Brackish groundwater and highly chlorinated municipal water sources, both of which lead to poor water taste, have led the public to demand better water quality standards and a better drinking alternative. By using the newly cost- and energy-efficient RO technologies, bottled water companies can more easily provide the product at increased profits. And consumers—residential or business—who have RO installed in their homes or offices can have virtually the same quality water available to them at the tap.

Conclusion
Thanks to the newfound effectiveness and performance of RO, Bob Dylan’s famous lyrics might be prophetic after all. If municipalities and industries around the world can cost effectively use RO for desalination and other options to better combat the looming water crisis, the waters around us might indeed grow. Meanwhile, the nations of the world will be able to provide clean, potable water to their populations for years to come. The times, indeed, may be a changin’.

About the author
Marwan Nesicolaci is vice president of water purification solutions for Severn Trent Services, of Fort Washington, Pa. He has 19 years of experience in the water purification equipment industry and eight years in the bottled water industry. He can be reached at (310) 618-9700 or email: mnesicolaci@severntrentservices.com