Summary: This article discusses several reasons for the current boom in advanced water treatment. In the forefront of this necessity will be a great need for water treatment professionals and their various skills. One thing is for sure—the trend will continue into the distant future.

Waterborne diseases are still responsible for a great number of human deaths on the planet. A March 2003 press release from the Water Supply & Sanitation Collaborative Council (www.wsscc.org), established in 1990 under a mandate of the United Nations, states that lack of “hygiene, sanitation, and a safe water supply…causes some three million deaths every year… and that some 1.1 billion people are without access to a safe water supply.” Most of the deaths are women and children in developing countries.

Developed countries, including the United States, have essentially eliminated the biggest waterborne diseases such as cholera, typhoid and dysentery. This has been the result of adequate sewage treatment and treating drinking water by using conventional water treatment technologies—clarification, filtration and disinfection with chlorine.

In the beginning…
When these technologies first began to be employed, the elimination of cholera and typhoid alone must have seemed like a miracle. But the world has changed considerably since then:

Wastewater generation
During the last century, our understanding of chemistry has grown dramatically. We’ve been able to create hundreds of thousands of new organic compounds such as solvents, detergents, pesticides, herbicides, pharmaceutical drugs, plastics and many more.

Concurrent with the creation of new compounds is the origin of waste products disposed in wastewater. Many industrial and municipal waste products travel in wastewater steams to the local sewage treatment plant. If they aren’t removed in the sewage treatment process, they typically enter a surface water used downstream by others as a source water supply for the production of drinking water.

There are a variety of toxic substances in source water that can cause human health problems. We now have an additional concern—the deliberate contamination of drinking water to cause disease and death. This is commonly called “bioterrorism” (see “Bioterrorism & Water Treatment,” Parts 1&2, WC&P, October 2003 and November 2003).

Many of our military personnel around the world primarily drink water that has been processed by advanced water treatment technologies. The U.S. Army, Navy, Air Force, and Marines all have high-tech water purification units. The Army has mobile RO water purification units (ROWPUs) that can operate in nuclear, chemical and biological warfare conditions.

High-tech water treatment is able to remove essentially all unhealthy substances from naturally occurring, disease-causing microorganisms to bioterrorism agents. Even contaminated seawater can be purified into drinking water. 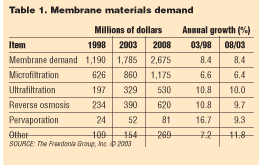 As quality river, lake and well water resources are depleted, less-desirable water sources must be purified for use as drinking water and industrial water needs. In California and Florida, as well as in many other coastal U.S. areas, the ocean has become the next water resource.

Power generation plants with high-pressure boilers require water that’s over a thousand times purer than drinking water. Without extremely pure water going into high-pressure boilers, the boiler tubes scale and melt due to the high temperature of the heat source (over 1,000°F) and the lack of cooling once scaling occurs.

Semiconductor manufacturing plants require water over a million times purer than drinking water. The circuitry on the most advanced microchips today is so small that nearly 500 microchip “wires” could be placed on the cut end of a human hair. If there are any contaminants present in the ultrapure rinse water during manufacture, the circuitry will electrically short. The purest water on Earth is found in a microchip manufacturing plant.

MF and UF membrane products are increasingly being used in drinking water treatment for the removal of Cryptosporidium oocysts and Giardia lamblia cysts from surface waters. Within the industry, MF and UF membranes are used to clarify or concentrate many different process streams and waste streams.

NF membranes are increasingly used for the production of drinking water from well water sources. The NF technology is used in an NF/RO sequential treatment for making drinking water from seawater in Saudi Arabia. There’s a current pilot study in the United States to determine the feasibility of NF/NF processing of seawater to drinking water.

Conclusion
Membrane water treatment is booming. It will likely continue to boom due to the expansion in the human population, the increased level of contaminants in source waters because of waste products generated by the increasing population, and the decreased availability of fresh water. The future is bright for water treatment companies and individuals with the knowledge, skills, 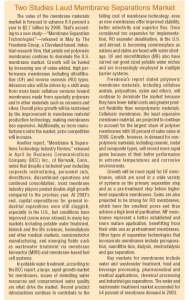 and ability to meet the challenges and opportunities of the 21st century.

About the author
David Paul is president of David H. Paul Inc., an advanced water treatment training and technical services firm in Farmington, N.M. He has over 25 years of experience in advanced water treatment. Paul has published over 100 technical articles and papers. He has created and administers a 4,000-page, college-accredited correspondence training program plus three on-campus college degree programs in advanced water treatment. He holds a bachelor’s degree in biology and a master’s degree in microbiology from New Mexico State University. Paul can be reached at (877) 711-4347, (505) 327-2934 (fax), email: dhp@dhptraining.com or website: www.dhptraining.com