Summary: Water treatment batch plant operators are faced with many factors when formulating a system best suited for their applications. One possible option is zero discharge, a topic that the author revisits with some personal experience serving as a backdrop.

The chloride issue
Take the case of brine discharge issue from portable exchange (PE) softener regeneration. Simple brine reclamation, such as reusing the last half of the previous brine for the first half of the next cycle, reduces the salt discharge by almost 50 percent and provides economic gain rather than an expense. From there, however, it doesn’t fit the mold. Chlorides such as CaCl2 and MgCl2 as well as excess sodium chloride (NaCl) have to be discharged or hauled at considerable expense. Restrictions on brine discharge (mostly chlorides) are threatening the livelihood of many water professionals and restricting consumers’ ability to enjoy the many benefits of scale-free softened water for home consumption.

When softener resin is regenerated, an excess of NaCl brine is used to provide the driving force for the regeneration. In a perfect world, one obtains 6,000 grains of recovered capacity per pound of NaCl. If you regain 24,000 grains with 8 pounds—3,000 grains per pound (gr/lb)—you have 50 percent brine efficiency. In higher total dissolved solids (TDS) waters, you might use 10 pounds and regain 28,000 grains for 45 percent brine efficiency.1 In a PE plant, you might use 15 pounds (the higher dose is to gain increased capacity and lower leakages) to get 30,000 grain capacity. That translates to 33 percent brine efficiency. Since NaCl is approximately 40 percent sodium and 60 percent chloride based on molecular weight, that means only about two pounds of the original six pounds of Na—being 40 percent of the 15 pound total—goes on the resin and four pounds goes down the drain.

With brine reclaim, you’ll use the last half of the brine again. Since only about 25 percent of the hardness is contained in the last half of the brine, you effectively reuse about 2.25 pounds of Na but your discharge still contains 1.2 pounds of Na and all 4.5 pounds of the Cl (60 percent of 7.5 pounds). There is no way to recycle the Cl. Then again, the Cl ion doesn’t even enter into the efficiency picture. Even if the system was 100 percent efficient, you would still discharge 4.5 pounds of Cl with a 50 percent recycle rate. Chloride (Cl-) is an anion and plays no part in the cation process. Recent restrictions enforced in California were due to the chloride issue, not the sodium issue. High chloride is considered harmful to both plant and animal life and its presence reduces the ability to reuse that water for agriculture or aquaculture.

Total recycle approach
A 1994 article2 described a regenerant recycle and reclaim system whereby the only sodium leaving the plant was that which was attached to the resin. The chlorides stayed in the plant with a near 100 percent recycle and the hardness (calcium and magnesium) was precipitated and actually sold as a valuable by-product. At the editor’s request, we are revisiting and updating the “Zero D” technology to look at it through 21st century eyes. Perhaps it can fill a need.

The very reactions that cause hardness ions to form scale is what makes this system work. An excess of brine (either sodium or potassium) can be used because there’s almost 100 percent recovery of the excess. For our pilot plant runs done in 1994, we selected a level of 30 pounds of NaCl and achieved average capacities of 36,000 grains-plus per cubic foot of resin with a brine efficiency of over 5,600 grains per pound. An added bonus was the <1 parts per million (ppm) of hardness leakage from the process.

In the Zero D process, hardness is precipitated from the waste brine with a near stoichiometric* quantity of sodium hydroxide (NaOH). All divalent ions that are insoluble as the hydroxide form (including calcium, magnesium, iron plus heavy metals such as copper, zinc and lead) drop out of solution and settle. The supernatant liquid—or clear fluid above a sediment or precipitate—containing the excess sodium (as the chloride and hydroxide) stays in solution and is nearly hardness free. The precipitate is drawn off to a thickening tank (where additional salt and caustic are recovered) and the supernatant is then neutralized with dilute hydrochloric acid (HCl) back to NaCl. The following reactions illustrate the process:

For the PE plant operator, all hardness that entered the plant (as exhausted resin) has been captured. All sodium (from sodium chloride) used to regenerate the resin is contained either on the resin (as regenerated resin) or in the brine tank (reclaimed). The caustic used to precipitate the hardness has been converted to salt as NaCl (see Reaction 4). In theory, at least, there’s neither a sodium nor a chloride discharge. So, what about the rinse waters and the backwash? Excellent question.

Those familiar with PE plant operations know there’s a lot more water used in the regeneration process than simply that associated with brine. In our pilot study, we recycled the backwash water (through 10-micron filtration) to remove resin fines and dirt. Subsequent studies and practice show that by using chlorine disinfection and filtration, backwash water can be recycled many times. Since the PE tanks come into the plant filled with water (roughly 5 gallons per cubic foot tank), some of the backwash water can be bled off and replaced with incoming water (it’s free, after all). There’s no elevated TDS from the backwash and no problem with its discharge. Rinse waters are something else.

Slow rinse
One of the most important steps in the regeneration of a resin is the displacement or “slow” rinse. The slow rinse follows the brine step and simply continues the flow at the same rate. Thus, the resin on the bottom of the bed sees the same number of gallons of brine for the same length of time as does the top of the bed. Since the brine is more viscous with higher density, there’s little dilution as the slow rinse water entering from above pushes it down through the resin bed. The slow rinse also serves to purge excess brine from the resin and allows it to slowly swell back to its fully hydrated state. During this phase of the regeneration (the salt purge from the resin bead itself), there’s a quantity of dilute salt created. Since there’s also a small quantity of salt and caustic contained in the “wet” portion of the precipitate, some dilution water has to be carried over to the waste brine tank. It may as well contain some salt since it isn’t going anywhere. In effect, we also reclaim the salt from the rinse water.

As the slow rinse progresses, about three bed volumes (BV*), or 22 gallons per cubic foot (cu.ft. or g/ft3), the rinse water is diverted to three rinse water storage tanks. This water will be recycled on the next regeneration with the highest TDS rinse used as the first part of the slow rinse, etc. Some city water will be used to complete the fill of the rinse tanks. At the end of the slow rinse cycle, the TDS of the rinse water will generally be below 1,500 TDS. This is sewered water and the brine contribution to TDS discharge is tallied in the mass balance analysis portion of the report. In other words, it’s diluted by the other discharge water and can remain below discharge limits over the long haul. Depending on the condition of the resin and its response to the fast rinse, the total water discharge in this process can be as little as 10 gallons per cubic foot of regenerated resin per cycle. 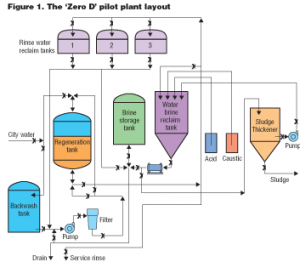 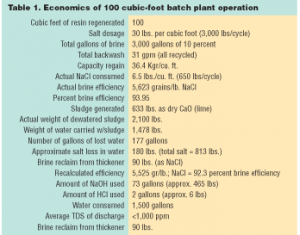 In 1994, I was able to find users for the “milk of lime” sludge produced by this system. Lime and magnesium oxide are used for the precipitation of metals from plating rinse recovery systems and other metal surface-finishing operations. This particular sludge will be an average of 80 percent calcium and 20 percent magnesium oxide. The sweetener is that it also contains some sodium hydroxide, making it not only effective but highly desirable. The buyer even offered to pick it up. The incidental content of heavy metals is passed along to the next guy who’s really into heavy metals precipitation and also takes the hand-off on your potential disposal problem.

System engineering
While the theoretical system above regenerates in 100 cu.ft. batches, the assumption for this article is that it also regenerates only once per day. It takes several hours for the sludge produced in the waste brine storage tank to settle. In practice, it would take several such tanks or one pretty decent clarifier (average flow rate is about 30 gpm during the 100-minute brining cycle). Using multiple regeneration vessels would give full utility of the clarifier investment. The waste brine would be automatically pH adjusted and mixed on the way to the clarifier (which would take about 100 square feet—sq.ft. or ft2—of floor space). The clarified alkaline brine would then be automatically neutralized with HCl on its way to the sweet brine storage.

At the onset of the brining cycle, the effluent from the regeneration tank is backwash water. This would be saved. A conductivity sensor in the waste line would make the determination as to when the brine is diverted for recovery. A low-level switch in the reclaimed brine storage tank would trigger the rinse cycle and high- and low-level switches in each of the rinse recovery tanks would sequence the tanks through both the delivery and refill cycles. When the last rinse recovery tank is full, the fast rinse goes to sewer, or to replace the backwash water with soft, clean water. For those operating a bottling plant, send it to the reverse osmosis system for making drinking water.

Conclusion
Based on the plant design used here, substituting a clarifier for the settling tank (waste brine storage) and a sludge press for the thickener tank, you would have a plant footprint of 1,800 sq. ft. (not counting exchange tank storage) with two regenerators, regenerated resin storage and a capacity of around 600 cu.ft. per 8-hour shift. The cost for such a plant would depend on how much automation is desired, but a conservative estimate would be in the range of $150,000 for equipment, instrumentation, pumps and piping. Retrofitting an existing plant would cost far less.

About the author
C.F. “Chubb” Michaud is technical director of the Systematix Company, of Buena Park, Calif. A University of Maine graduate, he has bachelor’s and master’s degrees in chemical engineering. He has over 35 years of field experience and holds several U.S. patents on ion exchange processes. An active member of the Water Quality Association, Michaud currently chairs the Commercial/Industrial Section Committee. He serves on the Pacific WQA Board of Directors and is past chair of its Education Committee. He’s also a founding member of the WC&P Technical Review Committee. He can be reached at email: cmichaud@systematixUSA.com