By John B. Ferguson

Where can you find residential water treatment and consumer product standards and regulations for overseas markets? If you’re like most exporting companies, struggling to understand the various related government and public health agency stipulations from border to border and continent to continent, that’s a daunting task.

On Feb. 27, however, Ms. Svetlana Corr completed the basic manuscript for the WQA Guide to International Standards and Regulations for Residential Water Treatment Equipment. Corr was hired by the Water Quality Association (WQA), based in Lisle, Ill., to work exclusively on this project.

The WQA brought Corr on board in December to work on the Guide. With experience in international development and marketing of water treatment equipment earned while working for WQA member company Earth Resources, of Prague, Czech Republic, she had recently moved to Chicago and the WQA was fortunate she was free to support its project. Immediately prior to moving to Chicago, she worked as program coordinator for the William Davidson Institute at the University of Michigan business school in Ann Arbor, Mich. A native of the Ukraine, she has a master’s degree in literature and is fluent in English, Russian, Ukrainian and Czech as well as having considerable skills in German.

The Guide contains information on 21 top international markets and 46 countries (see Factoids). “It was a big and interesting job,” said Corr, “but I’m happy to have finished it.”

A tool for many
One of the questions the WQA receives most frequently from members that may be manufacturers, assemblers or distributors is: “What does my company need to do in order to legally market our product in a particular international market?”

This Guide was intended to answer these types of questions. Corr started the project by trying to find out if anyone had attempted such a massive endeavor before. She found “a lot of market research focused on trends and demographics that could cost as much as $6,000 per report, but nothing that focused on simple regulatory requirements. Once a company makes a decision to enter a new market, an understanding of simple regulatory requirements is essential—but it appears that nobody has tried to collect all of the information for so many markets in one place and make it simple to use.”

We asked Corr if there were any markets that she found particularly easy to work with or interesting. She told us that Japan and Israel were the best in terms of response time and attention to detail. She had originally suspected that both markets would have been difficult to research, but instead was pleasantly surprised by the depth and scope of information provided by regulatory authorities in those countries.

“That does not make compliance easy in either country,” she said. “It just means that manufacturers face a relatively known set of requirements in both Japan and Israel and it is easier to evaluate them as potential markets.”

When asked which markets seemed more restrictive or “closed,” Corr preferred to let the data speak for itself. But she did tell us that she was surprised by how many countries have little or no restrictions on water treatment equipment of any type. It amazed her that drinking water products in some markets might not be regulated at all.

Pulling it together
Regarding how she was able to confirm all of the data collected on standards and regulations in so many countries, Corr advised that whenever possible she asked local companies and regulators to review the information she had written. The comments she received were very enthusiastic. Many companies weren’t familiar with regulations in their own markets or hadn’t received updates to regulations that have been in place for some time. All of the test audiences commented that the information in the guide was extremely useful.

Corr pointed out that some countries are very good about publishing their requirements online, making it available to anyone with an Internet service provider and are adept at surfing the World Wide Web. But none of the countries she surveyed had 100 percent of the necessary data online: “It seems almost universal that key information required in each market is not available for public consumption. Very few public sources will carry important information that stipulates what standards are mandatory and which are voluntary. Even fewer make copies of the actual standards available free of charge. It should be pointed out that the Guide does not include actual standards, which are copyrighted material, but it does describe them and advises where complete texts can be found.

“I hope that this Guide will save WQA members a lot of time and money. The research involved a lot of calling around, clarifying information that conflicted, and a lot of dead ends. I also had the feeling that there are some markets where the authorities would prefer not to reveal information that would benefit importers. I did nothing but collect regulatory information for several months and I have a hard time imagining that an employee of a WQA member company would have as much time as I did to dedicate to such a project.” 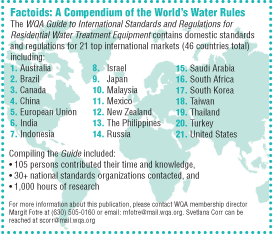 Better decision making
The WQA International Guide to Standards and Regulations is currently being formatted and should be ready for WQA members soon. “This is an example of information that will truly benefit WQA members and non-members alike,” says Margit Fotre, WQA membership director. “We’re looking for ways to price it that are fair to members and encourages non-members to join the association. So far, we have not determined what the price of the guide will be, but we want the non-member price to be relatively high and we want overall pricing to be able to support updates in coming years.”

As to real world applications of the former Guide, WQA international director Andrew Warnes said, “It’s been my experience that many companies will make the decision to enter a new market without much advance understanding of the regulatory requirements. When products are developed for our home markets, we understand what regulatory requirements need to be met. But when it comes time to take those products global, it’s often a scramble to find out what rules must be complied with.

“Unfortunately, this can lead to failure in a new market or expensive product modifications that nobody anticipated. A guide like this will help companies learn of regulations and standards in advance and hopefully save our members a lot of time and money in the long run. By bringing in a person to focus on these subjects exclusively, the WQA has hopefully minimized the efforts that WQA members companies will be required to make in order to put regulatory issues into their proper place in the corporate decision-making process.”

Conclusion
Corr says that she was glad to experience the cultural and technical differences between markets that she learned about while researching the Guide. She did note that after completing this project she feels that the day that one product can satisfy every requirement in every market is a long way away.

About the author
John Ferguson is communications manager and executive editor for the Water Quality Association, of Lisle, Ill. He can be reached at (630) 505-0160 or email: jferguson@mail.wqa.org