As if pregnant women don’t have it hard enough with the physical, hormonal and emotional stresses this condition imposes, now there’s another surge of research warning against the possible harm drinking water contaminants can do to unborn babies. At issue are chlorine disinfection by-products (DBPs) including total trihalomethanes (TTHMs). Chlorine has saved an untold number of lives and has earned its status as the most widely used chemical drinking water disinfectant in the world. Still, water utilities and health officials desire a balance between thwarting the threat of infectious agents with reducing the risk of birth defects, miscarriages and cancer from these DBPs.

All too common
A miscarriage is defined as a pregnancy spontaneously aborted prior to 20 weeks, while a stillbirth is the delivery of a non-living fetus greater than 20 weeks in gestation. The number of stillbirths in the United States is approximately equal to the total number of infant deaths. According to the Centers for Disease Control and Prevention (CDC), more than one in six pregnancies result in a miscarriage or stillbirth, equivalent to almost a million fetal deaths in 1996. Greater than half were after 28 gestational weeks and 20 percent were full-term. Although pregnancy loss may be due to genetic defects, maternal illness or placental dysfunction, half of all stillbirths are due to unknown causes.

The majority of miscarriages occur in the first trimester of pregnancy and are classified as having no abnormal cause. A percentage of miscarriages may generally be considered an inherent risk to pregnancy, i.e., “normal,” but how many might be preventable?

This brings to mind conversations with residents in developing countries, experiencing chronic diarrhea from protozoan infections but reporting overall good health. Consider the number of U.S. residents suffering from chronic stomach ulcers. Until recently, we blamed spicy food and a stressed-out culture, not the bacterium Helicobacter pylori, now recognized as the causative agent of up to 90 percent of ulcers in the United States. The point is: We must remain open-minded about currently accepted health risks possibly having preventable causes.

A look at the evidence
For more than a decade, moderate associations have been found with TTHM exposures and birth defects, reduced fetal size and spontaneous abortion.1,2 Recently, a study from Canadian researchers reported women who drank tap water containing THM levels of >80 micrograms per liter (µg/L)—the USEPA’s maximum contaminant level (MCL)—increased their risk of stillbirth by 2.2 times. One of the criticisms of the study is that the relationship between response and dose was non-linear. Specifically, women in the middle of the five groups, divided by increasing exposure level, had the second highest rate of stillbirth. This brings the data into question because one would expect that with increasing dose, you would have increasing adverse health effects. Therefore, causality and the contribution of other confounding factors are questioned.

Part of the problem in determining human health effects of DBPs is the exposure is cumulative including ingestion, dermal contact and inhalation routes. Furthermore, evidence of health effects is largely from inconclusive epidemiological studies and limited to single-agent toxicological data when, in reality, there are numerous DPBs of concern. To address these concerns, a recent USEPA report describes use of a cumulative relative potency factors (CRPF) method for evaluating the combined effect of DPBs over various exposure routes.

Several critical reviews of the epidemiological evidence have been published.1,2,3 Each points out that, while there’s substantial evidence linking chlorinated drinking water supplies with human health risks, findings are inconsistent throughout the literature. In addition, they often don’t follow a linear relationship, meaning that with increased exposure levels, you would expect increasing ill effects. While the general epidemiological evidence of adverse birth outcomes is inconsistent, and often only mildly associated with DBPs, there’s still an overall positive correlation. The evidence certainly merits further investigation and, thus, the research continues.

Reducing exposures
The vast majority of water treatment facilities in the United States use chlorine as their primary disinfectant. A still greater number add chlorine to the treated water as a residual disinfectant. It’s this residual chlorine that reacts with naturally occurring organic matter in raw water, i.e., humic and fulvic acids, to create potentially harmful DBPs. Reducing the use of chlorine or the presence of organic matter aids in the reduction of associative TTHMs. Some potential alternative methods of treatment include ozone, ultraviolet (UV) light and chloramines.

Although ozone and UV light are also effective primary disinfectants, they don’t provide lasting residual effects to protect the water supply during distribution. A variety of other chemicals are available, each with their own list of pros and cons. Chloramine has been used as a residual disinfectant in the distribution system. The USEPA estimates that 30 percent of surface water utilities will use chloramines as their secondary disinfectant to comply with current standards, i.e., the Stage 1 Disinfectants/DBP Rule, increasing to 60 percent for future proposed modifications, i.e., the Stage 2 D/DBP Rule. Use of alternative disinfection practices is being cautiously approached as any substitute process may produce other by-products of unknown risk such as chlorine dioxide’s by-product of chlorite and chlorate or ozone’s bromate.

THMs were first recognized as potential human carcinogens in the 1970s, leading the USEPA to set the first regulatory limits for the chemicals in 1979. The Stage 1 D/DBP Rule, finalized in 1998, established an MCL for TTHMs at 80 parts per billion (ppb) and other DBPs (i.e., MCL of the total of five haloacetic acids, or THAAs, is 60 ppb) while mandating use of enhanced coagulation in the water treatment process to remove natural organic matter (NOM), a major contributor to DBP formation. 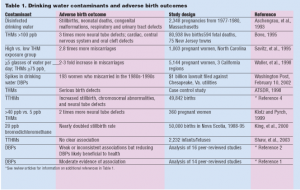 (see Table 1). In addition, studies have shown a link to bladder and rectal cancers. Therefore, with the Stage 2 D/DBP Rule, the USEPA is showing an increased commitment to lowering DBP exposures, beyond the compliance levels required in Stage 1.

The Stage 2 D/DBP Rule is aimed at reducing the level of exposure from disinfectants and DBPs, using a risk-based approach and identifying monitoring sites where exposure levels are highest. Highly contaminated sites could be masked by evaluation of annual averages of system-wide DBP levels.

A major concern is that the substantial benefits of pathogen reduction realized by chlorine disinfection aren’t compromised. Recall the five-year epidemic of cholera in Peru where inadequate chlorination of the water supply was, in part, due to concern of long-term risks of DBPs. The epidemic spread to 19 countries in Latin America, resulting in over one million illnesses and 12,000 deaths.

Consumers can control the quality of their drinking water at the tap with point-of-use (POU) and point-of-entry (POE) treatment devices. Although one must carefully evaluate their individual needs and capabilities of various systems, there’s a wide selection of brands and models of such devices on the market. Generally speaking, activated carbon or reverse osmosis filters are considered the most effective for removing THMs for POU. POE devices offer protection from cumulative exposures, i.e., dermal or inhalation routes. Regardless of the system chosen, careful adherence to manufacturers’ maintenance schedules is imperative.

Conclusion
Researchers are quick to point out the data relating adverse birth outcomes to DBPs are inconsistent for levels of DBPs normally found in drinking water. Such variability indicates factors other than drinking water contaminants are probably contributing to the issue. The question remains, however, as to what extent drinking water disinfection is a contributing factor. Certainly, chlorine is one of the most important discoveries for drinking water treatment and has made a vast improvement in human health. With the uncertainty of risks and cost effectiveness of alternative disinfectants, the USEPA is focusing largely on removal of the organic precursors to control formation of DBPs.

Analysts on both sides of the issue can debate all they want about the scientific validity of the study. As a scientist, I’m compelled to follow the evolution of the evidence, or lack thereof. But, as a mother, three times over, I know pregnant women will go to great lengths to protect their incubating bundles of joy. Treatment of drinking water in the home at POU or POE is a reasonable option for ensuring the safety of individuals concerned with exposure to DBPs. In the scheme of things, drinking filtered water is a minor sacrifice to make while scientists sort out the gravity of the issue.