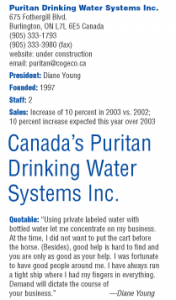 As recent as the late 1980s, the term “water cooler” was not a part of the water treatment lexicon in the Burlington, Ontario area. People simply didn’t know what coolers looked like nor what function they performed. Diane Young found this out firsthand as she test-marketed the water treatment industry in an attempt to secure the appropriate niche for her own fledgling business.

“With small business in my blood,” Young says, she set out to capture her own entrepreneurial spirit after working as a manager of a health food store. Her parents ran a farm equipment dealership with International Harvester for 30 years while raising a young Diane in Clappison’s Corners, a small town just outside of Hamilton, northwest of Buffalo, N.Y. From her managerial experience, she gained a greater appreciation, and curiosity, of water products and water quality in general.

“At that time, bottled water was really taking off here in Ontario,” she recalls. “An opportunity came up for me to get into bottled water so I bought a truck and water coolers and started really marketing them the old-fashioned way—cold calling—and I added one client at a time.”

‘Retirement bank’
In no time at all, the business—Puritan Springs Ltd.—required two trucks and several employees. Young’s attention to detail and emphasis on careful planning, not to mention meticulous market research, seemed to have paid off in a big way. To her credit, the 41-year-old Young had left no stone unturned—she contacted prominent organizations of the local water industry such as the Ontario Bottled Water Association and its founder, Bob Woodworth, consulted what she called the “retirement bank,” people that were out of the industry who now had the time to speak with her including Wayne Smart, the original owner of Crystal Springs in Canada, and made tons of cold calls to potential customers. Lastly, she adds, “I found out who my competition was and that was only a matter of opening a phone book.”

In 1995, Young made a fortuitous move by adding a point-of-use (POU) element kit because her client base was 85 percent commercial and 15 percent residential. When Young added POU, she said it was almost like cannibalizing her own client base since a product alternative was now available. But it foreshadowed great things to come.

“When I was doing my market research, I would ask people with water coolers who serviced their units, and nine times out of 10, they could not tell me,” she explains. “That was great for me since there was no brand recognition.” In other words, she found an untapped segment of the water treatment business that had yet been filled.

POU stands on its own 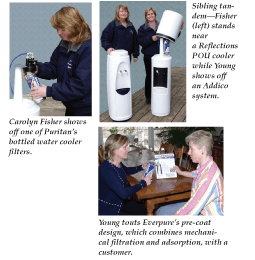 With this in mind, Young sold the bottled water company in 1997 to Echo Springs (which in turn was bought by Culligan) but kept the filter division, which operated under the name Puritan Drinking Water Systems. She currently serves as its president. Since she had added POU bottled water coolers, “it started to take on a life of its own,” she says.

The move to strictly POU water coolers definitely has its advantages, Young stresses: “POU coolers are more convenient (no bottle storage) and more cost effective.” For instance, high-security buildings prefer POU better so as to avoid bottled water deliveries. Plus, with 40-pound bottles, this saves Young the difficulty of hiring someone to make deliveries.

“There will always be a need for bottled water with a logistics aspect we will always contend with when we go out and plumb for a POU unit and, of course, personal preferences as well,” she says. “(But without bottled water), it takes some things off your plate and lets you concentrate on what you are good at and what you enjoy.”

Home is where it all starts
Going to predominantly POU coolers also has allowed Young to work out of her home. On a typical Burlington winter day, this is not something to be taken lightly. “I love the commute,” she jokes. “This business is very manageable for running it out of a home-based office.”

Just because Young runs the business from home doesn’t mean she doesn’t get any outside help. After all, Puritan Drinking Water Systems carries about 500 customer accounts with room for more as Burlington has a population of 150,000, and is located between Toronto and Niagara Falls on the shores of Lake Ontario.

Sibling teamwork
Up until a couple of years ago, Young would do all the work except for installations. She has since hired a part-timer to free up more time for Young to concentrate on the sales end of things. Is she confident that this arrangement will work? She should since the helper is none other than her sister, Carolyn Fisher, who also worked for Young as a full-timer when she ran the bottled water business. Fisher is responsible for all filter changes and works a flexible schedule so she can spend time with her infant child. In addition, Young has another associate “contracted” out to do installations.

Even with POU water coolers as her primary product offering, Young occasionally installs undersink reverse osmosis units and some ultraviolet (UV) systems. While researching the bottled water market, she discovered that most people preferred the taste of spring water (“Ninety percent of my business when I had bottled water was spring water sales,” she says.). This persuaded her to carry Ever-pure equipment, which “is as close to spring water taste as I could get.” Both Everpure and Harmsco brands are distributed by Danamark, and Young began using Everpure equipment in 1995. 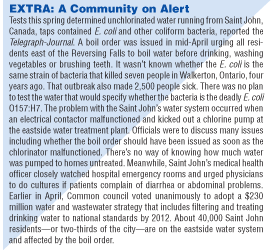 Because 95 percent of Young’s customers are on municipal water, taste and odor are the most frequent complaints about water quality. As Canadians have witnessed, municipal water can also carry its own set of issues when not managed well. Young explains: “There’s been high awareness ever since the Walkerton, Ontario issue occurred. It made people very conscious about water quality up here. It was on everyone’s tongue. It also opened up the market here and people became more educated about their drinking water quality. Before Walkerton, water was taken for granted.”

It’s been Young’s experience that POU water coolers are more popular with commercial customers in the Ontario area. This goes against the grain since residential usually constitutes most of the market, she admits. Some of this, however, was due to the initial strategy used by Young when first researching the bottled water market. After all, the direct sales approach was prominently used and contact was relegated to the “9-to-5 window and it was a huge market for us,” she says. While selling units to business owners, Young would also gain access to the employees for potential home business. For those rare customers living in outline areas, Young says she finds the water may contain high iron and sulfur and, therefore, UV is a more applicable technology.

With municipal water such a visible factor in the province of Ontario and other areas of the country, there’s always the issue of chlorine (see A Community on Alert). According to Young, local municipal plants are highly chlorinated. She remarks, “In the summertime, it’s essentially an algae bloom where you can actually smell the water.”

Aside from Walkerton, customers are asking more questions in general, Young says: “They are more in tune with different pieces of equipment out there as well as their pros and cons… and they comparison shop.” Here, conversation naturally gravitates toward big-box retailers. Like their North American border-mates to the south, Canadians are inundated with outlets such as Home Depot, Wal-Mart, Sears, RONA, The Building Box, Costco, etc. But with Puritan’s heavy emphasis on commercial accounts, big-box retailers and the DIY (do-it-yourself) market have little effect.

Conclusion
“We have our specialty and what sets us apart from our competitors,” she says. “There’s room enough for all of us, and the market is growing.” Comparing POU with her previous line of work, Young says, “POU is not as cut-throat as bottled water, which often comes with aggressive marketing tactics like two-week free trials.” Meanwhile, POU is more sophisticated sales, she contends.

Young says, “When I go see my customers who are aware of slogans and water treatment companies, instead of the Culligan Man, I can be the Water Lady.” And whereas Culligan has made its mark more of late in bottled water, “Water Lady” Young has found sweet success in POU.