More than 51,000 industry professionals including designers, architects, distributors, kitchen and bath dealers and other retailers flocked to the 2004 Kitchen/Bath Industry Show at McCormick Place in Chicago. It was the best-attended KBIS show ever. It also proved a fountainhead of water improvement news from leading major appliance manufacturers. 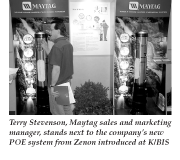 Maytag moved into whole-house water purification at K/BIS with the introduction of its new hollow-fiber, membrane ultrafiltration, point-of-entry (POE) system. The Maytag Central Water Filtration system is NSF certified to Standards 42 and 53, and has significant bacteria- and virus-blocking capabilities, according to Zenon Environmental’s Tony Stephenson. Zenon manufactures the system for Maytag. Stephenson claims the POE central water filtration system makes nine gallons of biologically safe water per minute and operates on as little as 35 pounds per square inch (psi) water pressure. The unit features a factory-set automatic backwash. Zenon is training Maytag-certified installers to maintain the units, which come in two versions—one for municipal water and another with a “big blue” sediment filter for well water. Suggested retail prices are $2,200 and $2,800, respectively, says Stephenson. At the same time, Maytag has upgraded its side-by-side refrigerator water filtration unit, PuriClean II. The new NSF-certified (Standards 42 and 53) 750-gallon capacity filter (replacing a 500-gallon filter) is made by PentaPure. 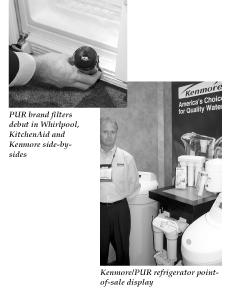 Whirlpool announced a new co-branding alliance with Proctor & Gamble’s PUR water filters in selected refrigerators at K/BIS. The new cartridge, bearing the PUR brand, is a twist-off unit inserted into the grille of new counter-depth, side-by-side refrigerator-freezers. The cylindrical cartridge, like a CUNO unit it will eventually replace in all Whirlpool side-by-sides, is certified to NSF Standards 42 and 53. Whirlpool’s KitchenAid brand refrigerators will follow suit, as will Whirlpool-made Kenmore side-by-sides. 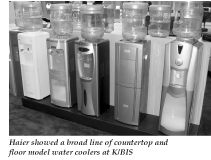 water treatment by the end of this year,” says Dutt, who revealed that CUNO is manufacturing the POU/POE products for Whirlpool. “Whirlpool is committed to a comprehensive sales training effort toward Lowe’s plumbing department personnel.” It should be noted this isn’t Whirlpool’s first branded venture in the water treatment category. In 1970, the company test-marketed water softeners, then made by Bruner, a company later purchased by Culligan. In the mid-1990s, Whirlpool tested a line of POU products made by CUNO in West Coast Circuit City retail appliance stores.

LG Electronics and Thermador side-by-side refrigerators both feature through-the-door filtered ice and water with filtration provided by twist-out CUNO units concealed in the grille (Thermador) or in the fresh food department (LG). 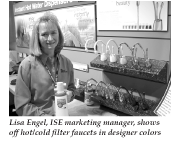 Water softeners at K/BIS
CUNO launched its SSupreme Series of water softeners and backwashing POE filtration systems at K/BIS, all with stainless steel tanks under its Aqua-Pure brand sold through plumbing channels. All SSupreme Series systems are built from 316L stainless steel, feature electronic push-button controls with LED screen, 19-gallon-per-minute peak flow rates, and carry a 25-year limited warranty. WaterBoss, the retail brand of Hague Quality Water, showed the same line of compact softeners at K/BIS that were redesigned just a year ago. The brand, once a retail category leader along with Kenmore, may be losing ground as Home Depot and Lowe’s consolidate around softeners that carry GE and Whirlpool brands. Sears Contract Sales showed the same lines of Kenmore water softeners and RO systems (made by Ecowater) as seen last year. GE Water showed no SmartWater products in its K/BIS booth for the second year in a row. 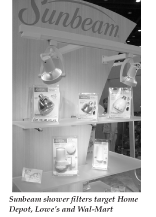 The integral faucet filter category appears to be stuck. The overwhelming growth of refrigerator water and ice filtration appears to be coming at the expense of the integral faucet filter industry led by Moen. Moen showed nothing new this year in its PureTouch filtered line for kitchens and baths. In fact, its PureTouch display space was reduced by 50 percent as Moen placed emphasis on its K/BIS launch of a new high-end faucet line. American Standard showed the same selection of POU kitchen and bath filtration products this year as last—as did its Jado division, an upscale line of filter faucets. Just as telling, there were no new entries from other faucet manufacturers in the category.

In-Sink-Erator exhibited its Series 1100 instant hot water dispensers in an expanded choice of nine finishes to coordinate with any faucet. The F-201 replacement filter is rated for taste and odor. The F-501R adds protection against cysts. Model HC-1100 has two graceful levers—one for instant hot water and a second for filtered cool water.

About the author
David H. Martin is president of Lenzi Martin Marketing, of Oak Park, Ill., a firm specializing in water improvement and environmental marketing that integrates old and new media. He can be reached at (708) 848-8404, email: dmartin@lenzimartin.com or website: http://www.lenzimartin.com.

Greenbison Inc. showed its Samson multi-purpose washer for deep cleaning of jewelry, fruits, vegetables, dishes and kitchenware. Items are immersed in a three-gallon ABS plastic reservoir that fits in the kitchen sink. Units combine ultrasound and ozone action and will be sold through health food stores and direct to doctors and dentists, according to Greenbison.