Wastewater: Going the MBR Route When Replacing a Septic System

Summary: In need of a large-scale wastewater treatment system utilizing its current equipment parameters, an Alaskan lodge turned to membrane bioreactor technology. Over a few years time, the system has proven to be beneficial and free of operational difficulties. A closer inspection of the system’s inner-workings is detailed here.

Alaska’s growing tourism industry has fueled the construction of facilities to serve the lodging and entertainment needs of seasonal visitors. As the size of these facilities expand from small lodges and bed and breakfast-type businesses to larger full service resorts, more sophisticated wastewater treatment facilities are required. One such lodge on the Kenai Peninsula recently turned to membrane bioreactor (MBR) technology to meet its environmental and wastewater challenges. The lodge replaced its septic tank and a mound leach field system with a custom-designed MBR system.

The lodge faced a number of constraints in the selection of a wastewater treatment system. Perhaps the most important constraint was to maintain the option for sub-surface discharge into the existing mound system at the increased wastewater flow rates anticipated for the expanded facility. The state of Alaska requires sufficient area be set aside for a replacement system in case the absorption system fails if sub-surface discharge is used for wastewater disposal. Also, while the lodge had adequate replacement area set aside for the existing mound absorption system, construction of additional mounds (and associated replacement area) to accommodate increased wastewater flows would occupy a significant portion of the available property. Use of the existing absorption system was complicated by observations of ponded water in monitoring tubes, which indicated that discharge from the existing septic tanks had, over the years, compromised the adsorptive capacity of the mounds.

Lodge requirements
To maximize the potential for long-term use, the lodge required a wastewater treatment system that would minimize the soluble organic and particulate load to the sub-surface absorption system. In addition to a high quality effluent, the lodge also required a system that could be operated by the existing maintenance staff with limited, prior wastewater treatment training and experience. The treatment system also needed to be able to operate throughout the peak of the season when the lodge is fully occupied and shoulder season when only a fraction of the facility is occupied. The system also needed to be shut down during the off-season when only a skeleton maintenance staff is on site. Finally, the treatment system needed to blend unobtrusively into the existing lodge complex.

After a thorough evaluation of wastewater treatment alternatives capable of treating anticipated flows under the constraints previously described, a submersed MBR system was selected. It utilizes hollow fiber membranes with a 0.4-micron nominal pore size placed directly into the aeration tank.

The system provides course bubble aeration to create a continuous flow of mixed liquor around the membrane module and the oxygen required for microbial degradation of waste components. The fibers in the module are horizontally aligned, which allows for sufficient contact of the air and membrane fibers. The system is operated on an “eight-minutes-on and two-minutes-off” schedule. The filtrate pump pulls a vacuum on the membranes with the air blower operating for eight minutes at which time the pump turns off and the blower continues to run. This two-minute period allows for the membranes to relax, improving air-scouring efficiency.

To provide flexibility in operation, the MBR tank at the lodge was divided into four separate aerated tanks, each with a working volume of approximately 1,800 gallons. Each aeration tank was large enough to fit one membrane module. Three modules were initially installed to provide a treatment capacity of 20,800 gallons per day (gpd). The fourth compartment was provided for a future upgrade if necessary. The four aeration tanks share a common anoxic zone with a working volume of up to 8,600 gallons for equalization and denitrification of the wastewater. All wastewater was passed through 1/16-inch, wedge-wire rotary drum screen before entering the membrane tanks. A schematic of the MBR system is shown in Figure 1. 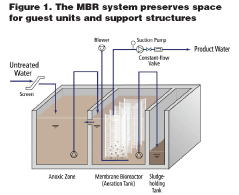 Operational issues, system performance of MBR
The facility was started with raw wastewater in May 2001 and has been in operation for over two years. 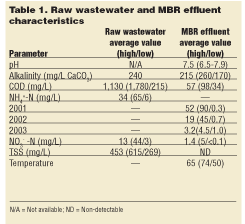 Table 1 summarizes the waste characteristics and effluent quality during this period. The lodge generates a particularly strong waste stream with chemical oxygen demand (COD) values typically in excess of 1,000 milligrams per liter (mg/L). BOD concentrations of around 800-1,000 mg/L are common. Effluent COD has been consistently below 60 mg/L since startup, regardless of waste strength.

Less consistent results were initially obtained for nitrogen removal. During the 2001 season, limited nitrification was observed. Since the MBR was started from only raw wastewater, much of the first season was devoted to developing an active bacteria culture of nitrifiers. In addition, the high waste strength generated by the lodge exceeded the design waste strength. As a result, the aeration capacity initially provided was inadequate to consistently meet the oxygen demand. Based on the results of the first season of operation, additional blower capacity was installed in 2002 and an aeration header added to one end of the anoxic tank to provide more aerobic detention time during peak months. These modifications promoted better nitrification during the second and third years of operation. Consistently low levels of effluent nitrate have been measured during the last two years of operation.

What to do with waste?
One unique aspect of this installation is the need to accommodate the distinct wastewater flow characteristics that result from seasonal operation. By varying the number of membranes online, the MBR capacity can be matched with the wastewater flow rates that range from less than 500 gpd to over 13,000 gpd throughout the season. The aeration system was designed so that aeration capacity could be matched to the number of membranes on line. Table 2

Significant foaming was observed during startup in 2001 until a stable culture of biomass was established. Foaming also occurred for approximately one week after the MBR was placed back online in 2002 and 2003. No foaming occurred once this seasonal startup period was completed. Although short in duration, this annual foaming event is problematic unless foam control is provided. Operating experience indicates that tap water supplied through low-volume spray nozzles will provide effective foaming control.

Discharge of the MBR effluent has improved the performance of the existing mound adsorption system. No standing water has been observed in the monitoring tubes since the MBR has come online and the existing adsorption field easily accepts the increased effluent generated by the expanded lodge facility.

Operation of the MBR system is routinely conducted by staff with excellent general electrical and mechanical skills, but with limited formal training in wastewater treatment. Main operational duties include routine system checks, removing screened solids, and elimination of sludge waste (waste solids are trucked off-site about every week during the season peak). Because effluent is discharged to a sub-surface adsorption system, operators only routinely collect the MLSS and flow data necessary for operation of the facility. On average, the lodge staff spends less than two hours per day at the facility. About 3-5 manpower days each spring are required to bring the system back online. About 4-7 manpower days are required each fall to drain, clean and prepare the system for off-season storage.

Conclusion
Implementing MBR treatment has allowed the lodge to continue to use the existing mound systems, thus preserving site acreage for guest units and support structures. With its four separate aeration tanks, the MBR provides the flexibility to match system capacity with the variable flows that occur during seasonal operation. Other than a period of brief foaming during startup in the spring, storing the membranes in chlorinated clean water during the off-season has caused no operational problems.

About the authors
Lisa Woolard, P.E., is the managing partner in GV Jones & Associates Inc., of Anchorage, Alaska, a process engineering firm specializing in water and wastewater treatment. She can be contacted at (907) 346-4123 or email: lisa@gvjones.com

Michael Sparks is an MBR product engineer at Ionics Inc., a global leader in the treatment and analysis of water and wastewater. Founded in 1948, Ionics has over 50 years of experience in the design, installation, operation and maintenance of membrane-based water treatment systems such as the one discussed in this article, which involves an MBR system using Sterapore™ hollow fiber membranes. Sparks can be reached at (617)-926-2500 or email: msparks@ionics.com

For more information about Ionics, of Watertown, Mass. Visit www.ionics.com