If timing were everything, Keith Bradley wouldn’t be in business right now. After the events of 9/11, Bradley and his wife, Meredith, were hit hard on two fronts. One, Meredith’s business, Environmental Ventures—a recycling company that found alternative packaging uses for magazines—seemingly hit rock bottom due to a lagging economy like so many other small startups. And two, Keith’s “leap of faith” three years earlier with his own water treatment business—operated under his wife’s business moniker since it was already established—was also in danger.

The Bradleys were threatened with losing both businesses in one fell swoop. By the end of 2001, it was clear the recycling business was beyond salvage. The water treatment business’ fate, though, was very much in the air. Flummoxed, Bradley hired a business consultant who advised him to change its name. Bingo! Thus, Bradley Clean Water Systems, of Lugoff, S.C., was officially born Jan. 1, 2002. Bradley viewed the new name as symbolizing a fresh start.

Early on in 1998, Bradley—who serves as company president—had his doubts about whether he was cut out to run his own water treatment business. “Even though I have faith, I didn’t want to jump into this yet so I test-marketed,” he explains. “I got to see what my competition was doing and I saw the profitability that could be made in this market, but I was still wary.

“I was 48 years old and I came to realize that if I never got into this thing, I would have always wondered what would have happened had I done it. I also realized that if I ever was going to build a business, this would be it. I was kind of trying to build it on the side on the weekends, but I realized that I could not build my business and be away from it.”

Before going solo, Bradley was a regional sales manager for a national industrial water firm, where he was employed for 20 years. A good part of the job involved traveling all over the southeast U.S., which gave him a good background on different water qualities and industrial as well as commercial water treatment. But it also had its drawbacks, he says: “Unfortunately, it kept me away from my family three or four nights a week… and that was one of the reasons I decided to go into business for myself.”

Equipped with a bachelor’s degree in zoology with a minor in chemistry from Clemson University, Bradley’s chemistry background along with knowledge of flows, pressures and other physical processes of water helped with his new business. It was about 10 years ago, though, that Bradley saw a shift in water treatment toward the residential customer. That was part of the attraction in starting his water treatment business in the late ’90s. 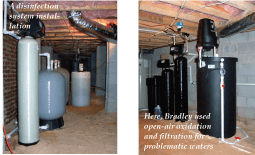 Spread the word
Bradley, whether participating in civic organizations or his church, would be approached by people who would ask, “Don’t you do water treatment work? Because we just bought a house in the country and we have a well and our water is terrible. Can you help us?” He would often conduct a water analysis to determine what caused the problem. He eventually built a few treatment systems in his free time. Word spread and more people sought his services. He says, “So, I told my wife 10 years ago that there may be a business here… But I’m not going to jump into this thing because I have a great job, great income and great benefits.”

Still, the intrigue of starting his own business was enough for Bradley to take the plunge into the water industry. Recently, Bradley spoke with his accountant and wondered aloud if the business would ever realize its potential. “He reminds me that I started my business during a bad economic time,” Bradley says. Yes, it has been quite an introduction to the entrepreneurial world for Bradley in the past 2-½ years, but there seems to be a light at the end of the tunnel. Last year, Bradley Clean Water Systems saw a 25 percent increase in revenues over its debut year, and Bradley sees the same jump this year over last. “We’re hanging in there,” he surmises.

For 2004, Bradley altered his business strategy to include more industrial water accounts and this, in large part, accounts for the rosy outlook. As a result, he has been in contact with some previous clients from his former job experience that includes a contract for a poultry-processing plant in need of some water softeners. In addition, he also picked up a boiler water account to provide some “diversification in the business.”

“I realized that if I got into the industrial market (at the outset),” he says, “it was going to require some cash outlay, more analytical equipment and a line of products.” Instead, Bradley waited until he got his feet wet with the residential side of the business, which still accounts for 85 percent of his sales. Meanwhile, 10 percent is in industrial and 5 percent in commercial accounts. Bradley has installed some reverse osmosis (RO) units in some local banks’ break rooms. Many RO units also find their way to servicing residential wells.

About half of Bradley’s customers are on private wells (ranging from 85 to 300 feet in depth) while the other half are on municipal water. In many wells, iron, manganese, naturally occurring hydrogen sulfide gas and some low pH readings can be found. This year, Bradley has seen unprecedented problems with wells, which he attributes to the three-year drought between 2000-2002 and an overabundance of rainfall last year. On the municipal side, taste and odor are frequent customer complaints and often are solved with an RO system as well.

Choosing the ‘alternative’
Since the business’ employees consist of only Bradley and his wife, who handles all bookkeeping and marketing duties, there are some equipment installations done on contract, but complicated ones are always handled by Bradley himself. This is strictly intentional to maintain a small employee base at what he calls the “alternative water treatment company.”

Besides ROs, Bradley Clean Water provides installation of carbon filtration, neutralization in well water, remediation of coliform bacteria, manganese filtration, and even offers his services as a radon consultant. Some of the manufacturers who provide equipment to the independent water dealer include Park International (tanks), Fleck (control valves), Clean World Waters (ROs) and ultraviolet from Atlantic UV and R-Can Environmental.

Lugoff is a bedroom community of 5,000 near Columbia, S.C., which has a population of about 500,000. Bradley serves both and more. The business covers both Carolinas, and the Bradleys even have a second home on the North Carolina coast. He’s penetrated the North Carolina market well by keying on VIPs who have large estates in the area, including professional football players and politicians. His sales radius extends as far north as Raleigh, N.C., and south to Savannah, Ga. He says flatly, “I go where the market is.”

In the relatively short time he has dealt with primarily residential customers, Bradley admits few people are aware of water quality issues. “The public is… too involved with their computers and their TVs while going down to Home Depot or Lowe’s and getting something off the shelf that they think is going to solve their problems,” he says. “I cannot educate the public as fast as the TV can uneducate them.”

Not a three-letter word
A Water Quality Association member, Bradley predicts purified water will became a more sought-after product for drinking water customers. He explains, “The public is misinformed about pure water vs. filtered water. P-U-R does not equal p-u-r-e.” When visiting customers on service calls, he puts it in layman’s terms: “Our kidneys function similarly to an RO system. Personally I’m glad my kidneys work as an RO, because if they worked as a filter, I wouldn’t be here.

“You buy home insurance, automobile insurance and health insurance to insure you and your family. Why not do the same for your water quality?”

For now, Bradley is banking on his reputation and his hometown boy roots—he’s from Lugoff—to steer him through initial roadblocks. One thing is for sure: He has learned to pick his battles and with whom. “I can’t compete with (big box outlets) because the public is basically into do-it-yourself these days… I only wish I could go into Columbia and go on some of those radio talk shows and promote my business, but they are costly. Most of my business instead comes from third-party endorsements.”

In fact, the company has attempted various advertising avenues such as radio ads, radio shows discussing water issues, newspaper ads, and direct mail without much success. Bradley sticks to the slow economy as a main reason why the reception has been cool.

Conclusion
Ever colorful, Bradley likes running his own business and spending more time closer to home, rather than racking up frequent flyer miles in his old job.

“I don’t regret leaving my old company because I enjoy my time at home,” Bradley says. “I enjoy being in control and building systems. The only regret I have is not being able to progress the way I would have liked due to the timing of the business start-up.”