Purification of Water at Point of Use: History & Questions on Indicator Microorganisms in View of an Israeli Standard, Part 2 of 2

In Part 1 of this series in last month’s WC&P, we left off during an explanation of the history of water treatment and regulatory efforts to improve it, outlining the U.S. and European approach. In this article, we’ll go more in depth on the Israeli experience.

Water quality in Israel
About a third of Israel’s population of 6.1 million as well as a major portion of its industry and agriculture, which make up a third of its economy, are concentrated in the region overlying the coastal aquifer.12 Chemical and microbial pollutants, salination, nitrates, fuels and toxic organic compounds threaten to contaminate the aquifer. Contamination by heavy metals is minimal, however, and is confined to sites in the environments of specific industrial zones.

Microbiological pollution: Bacteriological standards for drinking water, which were tightened in 1989, state that water is unfit for drinking if routine microbiological tests reveal more than three coliform microbes and/or zero fecal coliforms in a water sample of 100 milliliters (ml). Many thousands of tests on the microbiological quality of drinking water are conducted each year by the Mekorot Water Co. and local authorities under the supervision of the Israeli Ministry of Health. In both cases, only a small percentage of tests (about 4 percent) shows excess contaminants, most due to antiquated and leaking sewage pipes, especially in the northern part of the country.

Standardization in Israel: In 1989, the first version of Standard 1505: Drinking Water Treatment Systems for Domestic Use—Filtration and Purification was drafted for domestic water treatment systems. It relates to the following treatment categories—filtration, removal of taste and odor, and chemical and microbial purification. The chemical and mechanical aspects of particle filtration were based on NSF standards 42, 53 and 58. The bacterial purification category was developed by local committees. In November 2001, the standard was modified, allowing higher levels of heterotrophic bacteria in the effluent to a limit of 5×103/ml as follows: ”In the bacteriological purifier the overall count of aerobic microorganisms shall not exceed 5×103/ml.” This is in contrast to the 1989 version where: “The overall count of aerobic microorganisms in the effluent shall not be higher than in the influent and preferably less.”

The category of bacterial purification in the 2001 standard includes the following three stages:

In addition to the standard itself, a “Standards Mark” issued by the Standards Institute of Israel (SII)—see www.sii.org.il/siisite.nsf/pages/chemistrylab—can be obtained. This mark indicates that the water purifier is being tested by the SII several times a year as well as by the quality control system of the manufacturer. The SII mark assures the consumer that the water purifier is under continuous surveillance and complies with SI 1505 at all times.

The testing system used by one Israeli company is shown in 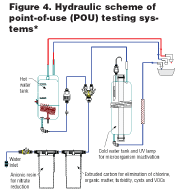 Figure 4. The scheme consists of a water inlet connection (1), two positions for filtering devices (2,3), UV for inactivation of microorganisms (4) and a water heating unit (5)—with the preceding numbers referring to points delineated in the figure. A detailed test protocol is sent to the independent laboratories that perform the test. 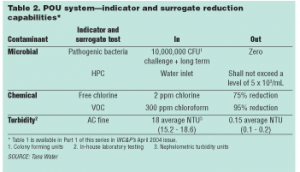 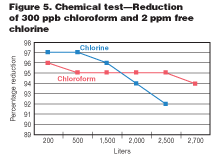 In Water Quality: Guidelines, Standards and Health,14 it’s pointed out that, traditionally, indicator microorganisms have been used to suggest the presence of pathogens. While acknowledging the myriad of reasons for the presence of indicators and absence of pathogens, or vice versa, it’s currently accepted that there’s often no direct correlation between numbers of indicators and enteric pathogens. Hence, specific microbial indicators are now recognized as follows:

The validity of any indicator system is also affected by the relative rates of removal and destruction of the indicator vs. the target hazard. Therefore, differences due to environmental resistance or even ability to multiply in the environment all influence their usefulness. Thus, it’s almost impossible to find an indicator that satisfies all the conditions above.

Perspective on surrogates
The following was concluded from a study of surrogates or indicators used for regulatory monitoring in 22 countries providing a national report representing a broad cross-section of development.15 As shown in Figure 7, almost all countries use total coliform bacteria for regulatory monitoring. Total microbial counts are used by 67 percent, fecal coliform bacteria by 60 percent, and E. coli by 47 percent. Only one country monitors Cryptosporidium directly. 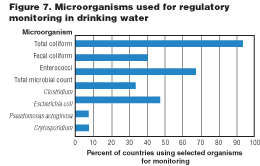 It may not be optimal that most countries use coliform bacteria since different countries differ in environmental factors such as temperature, pH, geology, climate, sources of contamination and organisms of concern. Between 50 and 60 percent of the countries report that protozoa are a significant microbial issue. Bacteria were the next most prevalent organisms of concern; 47 percent and 33 percent of the countries listed Legionella and Cam-pylobacter, respectively, as important organisms. Among the viruses, hepatitis and calicivirus were reported to be of most concern.

Contaminant Candidate List
Under a regulation of the U.S. Safe Drinking Water Act, the U.S. Environmental Protection Agency (USEPA), in 1998, published a list of unregulated contaminants that are known or expected to occur in public water systems and may pose a risk to drinking water. This Contaminant Candidate List (CCL)—see www.epa.gov/OGWDW/ccl/cclfs.html—includes 50 chemicals as well as 10 “new” microbiological contaminants, as shown in Table 3.

It’s possible that future standards may need to include one or more of these organisms in addition to, or instead of, those currently mentioned. The occurrence of these microorganisms in water and their resistance to disinfection should be further investigated to provide a sound basis for regulatory activity.16

Discussion
From the beginning of time, there exists an understanding that one of man’s most essential means of existence, water, needs to be purified. The ability to detect new contaminants and the study of health-threatening waterborne factors encouraged development of new technologies, raising the level of ongoing research and leading to more advanced standards. Technological developments enable public water systems to treat contaminants centrally to better obtain potable water. Nevertheless, there’s a growing reliance on point-of-use/point-of-entry (POU/POE) drinking water treatment devices as a final barrier for protecting consumer health from the failings of central treatment.

It has been claimed17 that consumers don’t base decisions on the opinion of central treatment suppliers. Instead, many prefer to manage their water quality directly. Additional treatment to remove pollutants that municipal or public water system aren’t able, nor designed, to treat is made possible at the POU by properly designed and maintained devices, thus adding another safety barrier against those contaminants.

Still, POU purifiers aren’t meant to replace public water treatment systems. Their purpose for most customers is: 1) to eliminate taste and odor; 2) to remove health- and aesthetic-related chemical and particulate constituents that are undesirable, and 3) to provide further assurance that pathogens resulting from incursion of unpredicted contamination in the water system will be removed. On the final point, three aspects may be considered. One relates to the water path from the water source—surface water, groundwater, ocean, etc.—to the customer’s sink, glass, etc.

In Israel as well as in many other countries, for example, the system that transports water to a considerable part of the population consists of: 1) a main (national) water carrier, 2) a municipal water network, and 3) the domestic installation. Most, if not all, systems naturally include one or more water treatment plants and reservoirs. While the main carriers are considered to be better protected and supervised by the health authorities, people often tend to mistrust the municipal and, particularly, domestic piping systems. Typical problems in certain areas may result from bad maintenance of rooftop cisterns, heating installations, or replacement or repair of pipes in the neighborhood.

Conclusion
In view of the expanding role POU water purifiers play in drinking water supply systems and current standards relating to them, the microbial indicator question should be carefully examined. One question that naturally arises in the above connection is: Why should drinking water standards for public water supplies be insufficient for POU water purifiers since these standards have been established by the state to protect public health? The second aspect concerns “new” microorganisms that are on the priority list (see Table 3) but which authorities haven’t yet concluded whether they should be monitored, either from lack of knowledge about their occurrence in water and their resistance to disinfection16 or for economic reasons—equipment, manpower, etc. Finally, there’s the possibility of microbial re-growth in the device itself, which could result from the accumulation of “food” (i.e., nutrients) and a convenient temperature in the filtering media as well as the increased resistivity of the microorganisms that survived previous disinfection.

Viewing the complicated history of water microbiology and epidemiology, editing standards and regulations for drinking water and drinking water treatment units can be a complex consensus-reaching process. This is true for the public system in general and for POU water purifiers in particular. Developing standards and regulations with regard to the latter gives rise to a number of issues. Some questions that could be raised are listed in the sidebar (see Ps & Qs) to this article.

Answering these questions may require investment of time and money, but it’s a necessary step toward establishing standards to assure fulfillment of the objectives of POU devices and the public’s trust in them. Moreover, the fact our industry has arrived at the point of discussing such questions indicates POU devices aren’t just luxuries any more but may be regarded as a part of the public water supply system. Thus, collaboration between our industry and public water supply companies should be encouraged for improved public service.

Acknowledgments
The author would like to thank Professors Avner Adin and Ronald Gehr for their assistance in writing this paper, as well as Danny Taragan, chief executive officer at Tana Water, for his encouragement and support.

13. Nasser, A., “Indicator Organisms,” Proceedings of the Israeli Water Association, from course on “Disinfection of Water, Wastewater and Effluent for Reuse,” Kfar HaMacabiah, Israel, June 2, 2003.

* NOTE: Other references available in Part 1.