In January, the U.S. Environmental Protection Agency (USEPA) released “Factoids: Drinking Water and Ground Water Statistics for 2003.” The document contains numerous tables compiled from the federal version of the Safe Drinking Water Information System (SDWIS), the official account of public drinking water systems and violations of state and federal regulations. This article is a sampling of information found in this document, at the USEPA website and in U.S. drinking water reports submitted by individual states in compliance with the Safe Drinking Water Act. It also discusses inaccuracies associated with such information. 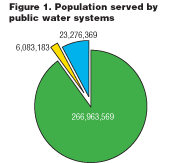 To be considered a public water system, there must be at least 15 service connections or 25 people served. Currently, there are over 161,000 public drinking water systems in the United States, varying widely with respect to source waters, treatment measures and population served.

Federal regulations
The National Primary Drinking Water Regulations (NPDWRs) are legally enforceable standards that apply to public water systems subject to inorganic, organic, radionuclide, microbial or other health-effecting contaminants. These primary standards set maximum contaminant levels (MCLs)—the maximum permissible level of a contaminant in water delivered to any user of a public water system. The MCL is set as close to the level where there are no known or anticipated health effects as is feasible with use of the best technology or treatment techniques. The USEPA sets treatment techniques, instead of MCLs, where it’s unfeasible to monitor and ascertain the level of a particular contaminant. The required treatment techniques are designed to prevent known or anticipated health effects. In addition, it sets maximum contaminant level goals (MCLGs) indicating the level of a contaminant at which no known or anticipated adverse effect on human health is noted. MCLGs are non-enforceable goals.

Each state is responsible for supervision of water systems within its borders based on USEPA-set national limits for a variety of contaminants and treatment requirements. States submit quarterly reports to the USEPA for review and analysis. Data from the reports are compiled into the SDWIS and are available to the public.

About 66 percent of those served by a U.S. public water system utilize a surface water source compared to 34 percent with a groundwater source 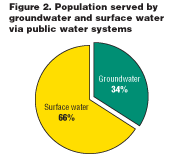 (see Figure 2). During Fiscal Year (FY) 2003, there were 3,986 U.S. community water systems reporting health-based violations, i.e., MCL, Maximum Residual Disinfectant Level (MRDL) and Treatment Technique (TT) violations. This is about 8 percent of the total systems reporting with a potential impact to over 24 million persons served, or about 9 percent of the population. U.S. commonwealths and territories (i.e., American Samoa, Puerto Rico, U.S. Virgin Islands) didn’t fare as well with an average of 44 percent of CWS, serving 71 percent of the population reporting health-based violations.

Although monitoring and reporting violations tend to be the most frequent infraction—with a documented 80,635 violations for all community water systems in FY 2002 (the data are currently not available for FY 2003)—there were 9,056 reported violations to the total coliform rule/turbidity (TCR/T) reported. In addition, 7,111 systems potentially affected 9,604,148 persons (see Figure 3). 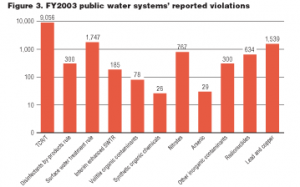 Although the accuracy of reported violations is thought to be high, many health officials are concerned about the completeness of the data—that is what’s not reported.

A faulty database
From 1999 to 2002, the USEPA announced it met its goal of supplying 91 percent of U.S. residents with tap water meeting all safe drinking water standards. Specifically, in 2002, the agency reported that 94 percent of the U.S. population served by community water systems received drinking water that met all applicable health-based drinking water standards through treatment and source water protection. But recent media reports (see Newsreel) called these figures into question due to an internal audit that found such statistics to be understated. The 2002 figure, for example, was believed to be closer to 81 percent. Although the reporting inaccuracies don’t necessarily indicate a direct health risk, such overstatements of drinking water compliance rates could affect the drinking water quality of tens of millions. A USEPA inspector general report states that, through a planned verification program, 71 water systems were reviewed and found to have safe drinking water violations at the state level. Of these, 17 weren’t reported by the states to the SDWIS. Because the database is known to be flawed and incomplete, no one really knows the overall quality of the nation’s drinking water. The agency is openly aware of inaccuracies and under-reporting of some data provided by states that are themselves in violation of drinking water regulations and is working on ways to improve the data quality. For more information, see: www.epa.gov/oig/reports/2004/20040305-2004-P-0008.pdf and www.epa.gov/safewater/data/reports.html.

Still, general trends can be inferred. While recognizing the need to improve the nation’s water quality database, the USEPA continues to use the only numbers it has to evaluate patterns in reported violations. In 2003, it was reported the national average was down to 90 percent. By 2008, one of the strategic sub-objectives the agency lists for drinking water is to increase that to 95 percent. Although the number decreased in 2003 and discrepancies are noted in the database, the reported value has steadily increased from 79 percent in 1993 to 89 percent in 1998. Under the Government Performance and Results Act, agencies are required to: develop plans for accomplishing strategic public health objectives, measure how well they’re doing, make decisions based on data analysis, and communicate performance information to Congress and the public. You can find out about the quality of your public drinking water supply by requesting a copy of your system’s Consumer Confidence Report (CCR) or by visiting the USEPA Local Drinking Water site at: www.epa.gov/safewater/dwinfo.htm

Conclusion
While U.S. public water systems generally supply good drinking water, uncertainties associated with waterborne contaminants, federal monitoring databases and personal taste preferences continue to fuel consumer concern over tap water quality. Evident by the fact drinking water outbreaks still occur and the list of regulated waterborne contaminants continues to grow, the quality of our drinking and source waters is far from perfect. Waterborne contaminants may be introduced from the environment (i.e., radon, arsenic), municipal treatment (disinfectants, trihalomethanes), waste disposal (human, animal or manufacturing waste), distribution system (lead, intrusion events) and other sources. Controlling the quality of water at the tap requires a multiple barrier approach and, in part, necessitates involvement from the consumer for point-of-use/point-of-entry treatment. Consumers want better water and are readily purchasing such home treatment and purification products designed to remove unwanted contaminants, improve taste and odor, and provide an additional margin of safety with respect to chemicals and microbes.