How You Can Have an Impact on DWTU Standards

When speaking with stakeholders in the point-of-use/point-of-entry water treatment industry—or any industry for that matter—NSF is often asked, “Why do you require _______ in Standard __? Why did NSF write the standard that way?” It’s a misconception that NSF dictates or writes the standards. In reality, any interested stakeholder can make a direct contribution to the standards. NSF/ANSI standards are developed by committees of volunteers through a consensus process allowing all stakeholders to have a say in standards that affect them in some way. These stakeholders include manufacturers, consumers (including water treatment professionals) and regulators.

So, you might wonder how you can actually impact these standards and propose changes or improvements that you see as beneficial. The first thing to understand is the structure of the committees that vote on the content of the standards. The second level of required understanding is the process by which changes to existing standards or new standards are adopted. Once you have this knowledge, you too can champion your cause all the way to adoption into an official NSF/ANSI standard.

Joint committee structure
NSF’s standards development process is accredited by the American National Standards Institute (ANSI). As such, NSF standards can become American national standards. There’s a great benefit to this designation. It means that as the American national standard, there’s no possibility another standard could be developed within the United States that might conflict with the NSF/ANSI standards and result in the need for dual or multiple compliance.

There are certain requirements the NSF standards development process must meet to comply with ANSI accreditation. The first is that they must be developed using a consensus body (an NSF joint committee) having balanced membership. This means any effort by a single group or individual is limited in its ability to dictate or exert dominance over the standard’s content. In fact, implementation of this requirement results in a joint committee with balanced representation from the following groups (see Figure 1): 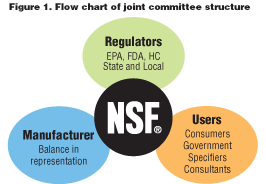 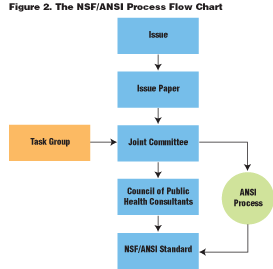 The chairperson of the joint committee is charged with maintaining a representative committee membership so an expert will be available regardless of the issue at hand. Membership on the joint committee is voluntary and relies on applications for membership being submitted to the chairperson. Openings on the committee arise through voluntary resignations or the need to expand membership to address new technologies, etc. More than one representative from the same company isn’t allowed. Openings are filled by reviewing the applications on file, which are weighed against several criteria:

Because manufacturers tend to have a greater interest in shaping standards, there are several applications on file for DWTU manufacturers but fewer for users and regulatory professionals.

The issue process
When someone has an issue with the standards they feel should be addressed, the first step is to submit an issue paper to the chairperson of the responsible joint committee. The issue paper form can be obtained directly from NSF and is available to any stakeholder that wishes to submit an issue for joint committee consideration. Committee members and non-committee members alike use the same form, and this could include you. The issue paper form requires a description of the issue, information about the submitter of the issue, and a proposed resolution or plan of action to address the issue.

Once the form is submitted, the chairperson adds the issue to the agenda for the next meeting. For DWTUs, these meetings generally occur twice per year—in the spring and fall. Dates for the next meeting are set during meetings and are available via the NSF website (www.nsf.org). To give the committee members time to familiarize themselves with the issue prior to the meeting, the chairperson requires that issue papers be submitted at least three weeks prior to the meeting.

The submitter of the issue paper is expected to attend the joint committee meeting to present and discuss the issue with the committee. Committee membership determines whether the issue is relevant to the standard(s) in questions, and makes a recommendation for follow-up action. Because the standards process is volunteer-driven, the issue submitter should expect to follow up per committee recommendations. This may include accepting a role as the chair of a task group related to study and resolution of the issue.

The adoption process
Often, the individual who presented the issue to the joint committee is asked to chair a task group to resolve the issue. Task groups are ad hoc, issue-specific groups that consist of joint committee members and non-committee members alike. They may achieve their goals through literature research, laboratory research and/or discussion, and typically meet via conference calls, although sometimes face-to-face meetings are held. The ultimate goal of a task group is to successfully develop a new standard or to ballot a change to the standard(s) that results in resolution of the issue.

Once the task group has agreed in developing draft standard language that will effectively resolve the issue, the chair of the task group prepares a ballot and works with NSF to issue a ballot to the joint committee. For a ballot to meet NSF standards development policies, a minimum of 67 percent of the total ballots cast must be affirmative ballots and the number of affirmative ballots must represent a minimum of 50 percent of the joint committee membership. Any negative ballots must include a technical justification why the voter doesn’t approve of the balloted language.

Any negative ballots must be adjudicated in accordance with NSF standards development policies and ANSI requirements. This means the reasons for the negative votes must be circulated to the full joint committee membership so they may have a chance to consider those reasons. It’s always possible someone may have thought of a scenario or concern that hadn’t occurred to other voting members that would render the proposed ballot inappropriate. Upon consideration, committee members have the opportunity to change their votes. If the ballot is rejected, it’s up to the task group to address the concerns expressed by those voting negatively, and then re-ballot the revised language.

Once the joint committee has approved the ballot, and any negative votes have been adjudicated, the ballot is forwarded to the NSF Council of Public Health Consultants (CPHC) for ultimate approval. The CPHC is a body of public health professionals that reviews all ballots from all joint committees for all NSF/ANSI standards. A minimum CPHC ballot return of 80 percent is required, and a minimum 90 percent of the returned ballots must be affirmative. Again, all negative ballots must include a technical justification and must be circulated for review by the full CPHC membership.

Conclusion
Some have thought of the NSF/ANSI standards process as being similar to the American legislative process—a bill is proposed to Congress, debated, voted on, and ultimately either rejected or adopted as law. While similar, there are striking differences.

Unlike the legislative process, which requires a member of Congress to take action, any interested stakeholder may bring forth a standards issue to the joint committee. Unlike the legislative process, which utilizes a paid legislature elected to specific terms, the committee is comprised of volunteers selected for no specific term length to the committee by evaluation of their expertise and commitments. Also unlike a legislature, which can be subject to outside political influences, filibustering, lobbying and other forces, the NSF/ANSI standards process is generally shielded from such pressures through its consensus process that utilizes rules to ensure each issue is fairly examined and given the chance to stand on its technical merit.

Although it’s possible to change laws through persistence and working with advocacy groups like the WQA, there are no guarantees your issue will ever be heard. This isn’t the case with NSF/ANSI standards. You, too, can submit an issue paper, present the issue to the joint committee—and see your issue all the way through to adoption as a standard.

About the authors
Jane Wilson is manager of standards at NSF International, of Ann Arbor, Mich. She has been with NSF for 12 years, and has experience with both the certification of drinking water additive products and NSF standards development. Wilson has a bachelor’s degree in medical technology and a master’s degree in public health (MPH) for toxicology from the University of Michigan. She can be reached at (800) 673-6275 or email: wilson@nsf.org

Rick Andrew is technical manager of the Drinking Water Treatment Units program at NSF International. He has been with NSF for five years while working with certification of residential drinking water products. His previous experience was in the area of analytical and environmental chemistry consulting. Andrew has a bachelor’s degree in chemistry and a master’s degree in business administration from the University of Michigan. He can be reached at (800) 673-6275 or email: andrew@nsf.org