Sodium Intake Levels and Softened Water: A Cause for Concern?

Much of the time when we talk about home water treatment systems, we want to know how well they remove contaminants. In other words, how close is our water to being simply H2O? Whether or not the addition of salts in the process of water softening is a concern is a frequently asked question. The following is an exploration of some common myths associated with point-of-use/point-of-entry (POU/POE) water treatment systems relative to the presence, absence or abundance of the essential nutrient, sodium.

Water conditioning benefits
At the point of entry, water softening is generally accomplished by passing water through an ion exchange media designed to remove hardness minerals, i.e., calcium and magnesium, and replacing them with sodium or potassium. While hard water isn’t unhealthy, and may even contribute a very small amount of total dietary need for calcium and magnesium, it can be a nuisance with regard to bathing and washing by leaving spots on dishes and surfaces while increasing soap consumption and laundering times. In addition, hard water can form scale that clogs pipes and adversely affects a variety of water-using appliances.1

Sodium chloride, aka common table salt, is often used in POE treatment systems, and consumers are frequently concerned about the health significance of added sodium in their diet via softened water. Sodium is an essential nutrient to humans, aiding in the osmotic pressure regulation of blood plasma, fluid content of body cells, and the contraction of body muscles including the heart muscle. An overabundance of the nutrient, however, has been linked to cardiovascular problems including hypertension (high blood pressure).

Most adults in America consume between 4,000 and 6,000 milligrams (mg) of sodium a day.2 A small segment of the population (about 3 percent), who are salt sensitive and on strict sodium avoidance diets, is limited to 500 milligrams per day (mg/day). This strict intake level isn’t normal and requires much effort, and possibly medical intervention, to maintain considering that many natural foods have some level of sodium present. Those on mild sodium restricted diets are encouraged to keep their sodium levels below 2,000 mg/day.

Like many foods, sodium is naturally present in drinking water. According to a survey in the mid-1980s, about three-quarters of 989 water systems surveyed had concentrations of sodium <50 milligrams per liter (mg/L), relating to <12.5 mg of sodium in an 8-ounce serving. This is considered a “very low sodium” beverage (see Table 1). Softened water adds to the natural amount of sodium in water, but the levels are still considered insignificant for most people. 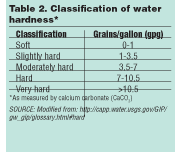 his value is well below 10 percent of the average daily sodium intake of Americans.

The USEPA doesn’t regulate sodium in drinking water but provides a guidance level of 20 mg/L in drinking water serving the high-risk population adhering to a strict sodium restricted diet. The agency further states that the guidance level for sodium is probably low, needs updating, would likely be higher upon revision, and thus “would not meet the criteria for inclusion on the Contaminant Candidate List (CCL) as a drinking water contaminant of concern” (see: www.epa.gov/safewater/ccl/sodium.html).

According to WQA Technical Director Joe Harrison, P.E., CWS-VI, sodium content in softened water is a small percentage of a persons dietary sodium intake and is perfectly safe for drinking and cooking.4 Harrison points out that essential minerals are relied on from a healthy diet, not drinking water. Overwhelming evidence in the literature supports this position.

Health risks of sodium
Scientific studies aimed at developing a causal relationship between softened water and cardiovascular disease haven’t found consistent results. This has lead to confusion and misconceptions about the safety of softened water consumption.

While most studies report increased sodium in the diet relates to increased blood pressure, a marker for cardiovascular disease and stroke, scientists debate whether or not sodium consumption leads to an overt increase in the manifestation of disease.5 They question if the entire population would benefit from lower sodium intake or if the benefits are limited to specific populations, i.e., those known to be sodium sensitive, the obese, specific age, sex or race classifications. Others point out that increased sodium intake has been associated with carcinoma of the stomach, bone demineralization, thickening of arteries, the severity of cardiac failure, the number of strokes, and other adverse health conditions.6

Link to heart disease
A recent study in Finland concluded that high sodium intake was positively correlated with coronary heart disease, but not stroke, regardless of other cardiovascular risk factors including blood pressure. Effects were significant for overweight men but not other groups.7 This study has been criticized with respect to a universal recommendation on sodium intake levels on a number of points including experimental design and perceived outcome.8

Although it’s commonly accepted that Americans consume too much sodium, the most significant dietary source appears to be processed foods and convenience snacks, not drinking water, whether softened or not. Scientists estimate that up to 80 percent of dietary sodium comes from processed foods (see: http://bmj.bmjjournals. com/cgi/content/full/328/7438/485-b). Beware, for example, of those popular pre-packaged cracker, meat and cheese meals that may contain up to 1,540 mg of sodium each. Compare sodium levels in canned, jarred and frozen foods. The preponderance of high sodium foods on the market lead the American Public Health Association to adopt a policy in November 2002 aimed at a 50 percent reduction of sodium in the nation’s food supply over the next 10 years.9 Food manufacturers are being targeted for this initiative.

Conclusion
Those wishing to eliminate sodium from conditioned water have the option of enjoying soft water throughout the home for bathing and laundry and bypassing the POE system with a hard water line installed to the kitchen or bathroom tap for drinking. Alternatively, POU systems, i.e., reverse osmosis or distillation, can be used to remove added sodium from softened water. Although sodium is an essential nutrient, the Food and Nutrition Board of the National Research Council recommends a sodium consumption of at least 500 mg/day and not to exceed 2,400 mg/day. Americans typically have a diet high in sodium but this is best reduced by targeting processed foods, not water.

Information on your particular public water source with regard to sodium and hardness can be found in a current issue of the Consumer Confidence Report, available from your local water utility. You can test for hardness yourself with a water hardness testing kit available from a variety of commercial vendors including water softening companies, pool and fish supply stores, or local hardware stores.