Purification of Water at Point-of-Use: History & Questions on Indicator Microorganisms in Israeli Standard, Part 1 of 2

Summary: A microbiological purifier standard has escaped the grasp of many countries including Israel. Herewith is a two-part article that follows Israel’s path to a recognized standard and what steps are being taken toward that end. In this first installment, the author traces a historical context of water treatment and a global perspective on various water issues.

Health threats posed by epidemics as well as taste problems have been the principal motivating forces behind treating water since the dawn of history.1 The development of point-of-use (POU) technologies is accelerating, and there’s growing reliance on POU and point-of-entry (POE) devices.2 A POU water purifier isn’t intended to replace public water treatment systems, but rather to provide further protection against unexpected pathogens in the water system.

In 1989, the first version of Israeli Standard 1505, Part 1 was drafted for “Drinking Water Systems for Domestic Use – Filtration and Purification.” Since then, the standard has undergone a few modifications—the main one being the November 2001 amendments that allow for an increase in heterotrophic plate count (HPC) bacteria at the outlet of the purifier.3 At a conference in Geneva sponsored in April 2002 by the World Health Organization and NSF International, experts concluded that HPC bacteria don’t indicate the existence of a public health risk. In Israel, however, this indicator still holds for POU systems. The need for pure water and growing water pollution problems in Israel and worldwide require the application of relevant water quality indicators for present and future control. On the other hand, use of indicators, which may not represent a real health threat such as HPC and Pseudomonas aeroginusa, may cause unjustified harm to the POU/POE industry as well as an unnecessary economic burden on consumers.

One assumption is that (a) worldwide harmonization of standards, (b) public education concentrated on differences between the presence of indicator bacteria and the acute threat of desease, and (c) unified drinking water regulations for public water systems and POU devices standards would lead to the selection of relevant indicators and elimination of inappropriate ones. The objective of this article is to examine the Israeli water quality situation and needs with respect to home purification devices and international standards, and to analyze the aforementioned recommendations as a basis for future standards while focusing on microorganisms. Historical development of the standard is described, followed by a comparison of international standards and discussion.

Historical background
The search for pure water began in prehistoric times. An inscription of an ancient apparatus for obtaining clarified liquids was pictured on Egyptian walls dating from 1450 B.C. (see Figure 1). 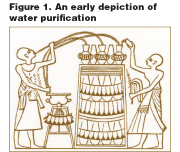 From evidence appearing in ancient medical Sanskrit, it’s possible to witness the oldest documented knowledge of POU water treatment.1 The “Ousruta Sanghita”—a collection of medical lore in Sanskrit dated at roughly 2000 B.C.—mentioned the need to keep water in copper vessels, expose it to sunlight, and filter and boil it.

Evidence of POU water treatment appears in the Hebrew Bible as well:

When they came to Marah, they could not drink its water because it was bitter. (That is why the place is called Marah.)
So the people grumbled against Moses, saying, “What are we to drink?”
Then Moses cried out to the LORD, and the LORD showed him a piece of wood. He threw it into the water, and the water became sweet. —Exodus 15:23-25

Public health implications
The development of microbiology as a science was accompanied by much uncertainty including recognition of the roles and importance of microorganisms. The most significant discoveries in this field occurred mainly in the 19th century. Until then, the causes of diseases and their manner of distribution were explained in different theories that have since been discounted. It wasn’t known that water could carry health-threatening microorganisms.4 Water quality parameters included clarity, taste and odor, which themselves were considered to be disease-causing (see Figure 2). 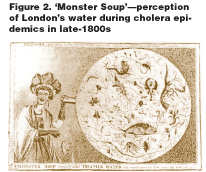 Until the middle of the 19th century, the theory of “spontaneous creation,” based on the spontaneous creation of life from non-living forms, was prevalent among scientists. It wasn’t until 1878 that Louis Pasteur, the pioneer of modern microbiology, presented his “germ theory,” which associated the presence of living microorganisms with contagious diseases.

Along with the difficulty in defining the causes of the diseases, there was an additional difficulty in categorizing their transmission routes. A breakthrough in understanding the mode of infectious disease transmission occurred in 1852 when Dr. John Snow, now known as the father of epidemiology, associated the infection of cholera in London with contamination of a water pump in the Soho area. Until his discovery, it was widely assumed that the source of the disease was connected with the presence of “miasmas” discharged by foul and rotting organic matter that released gasses and led to infection through the respiratory organs.5

The taste, smell and aesthetic qualities of water were the main motivations for the treatment of water, though the recognition that water could contain disease carriers was arrived at only in the middle of the 19th century (as mentioned above). The first central purification apparatus based on sand filtration was installed in Paisley, Scotland, in 1804. The aim was to avoid turbidity and foul smells—the latter being considered as the source of disease.6 Thus, in retrospect, it can be seen that from the beginning of time, water sources have depended on the undertaking of actions to improve their quality from both aesthetic and health viewpoints.

It isn’t always possible, in Israel as well as other countries, to accurately pinpoint the cause of a disease or the manner of its infection; there are occasions when water that’s apparently clear isn’t suitable for drinking. It seems appropriate to mention here that until recently, water quantity had been the dominant factor in Israeli policy. Currently, water quality receives much greater recognition than before, leading to changes in decision-making processes when new water supply projects are considered. More resources are required to be oriented toward the development of analytical and treatment means to combat existing threats to human health as well as those that may appear in the future.

Limited access to water
For a large portion of the world’s population, as shown in Figure 3, 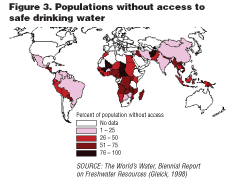 there’s no direct access to microbiologically safe water for drinking or other essential purposes. According to estimates,7 1.1 billion people are without controlled water sources and the consumption of unsafe water continues to be the main cause of some 2.2 million cases of diarrhea each year, appearing mainly in children. Water-related diseases cause the death of some 6,000 people per day, most of them children.8 Even in the United States, where water quality regulations and water treatment practices are of the highest standard, there were more than 300 million cases of diarrhea each year, the U.S. Environmental Protection Agency (USEPA) reported in 1990.9

In spite of efforts to supply safe water, the introduction of pollutants to water sources, both surface and underground, will continue as long as the population grows and urban development escalates. In addition to microorganisms that may include viruses, bacteria and protozoa, there are organic and inorganic chemical pollutants that are defined according to their aesthetic and health effects. These emanate from industrial, agricultural and even household wastes, and include VOCs (volatile organic compounds), arsenic, nitrates, lead and others. Detailed lists of pollutants exist according to international and national standards and guidelines as defined by groups such as the World Health Organization, the European Community and the USEPA. In addition to various anthropogenic influences, there are pollutants whose source is in certain natural phenomena such as volcanic eruptions, hurricanes, floods and cyclones, forest fires, etc.

Treatment equipment standards in America
In the United States, there are six primary standards governing certification for drinking water treatment units (DWTU) used in POU/POE applications. Developed in accordance with American National Standards Institute principles by NSF International, they are as follows:

Today, an estimated 40 percent of all U.S. homes have water treatment devices.2 Microbiological claims available within the current standards include bacteriostasis (Standard 42), cysts (Standard 53), microbiological reduction by UV, disinfection (Standard 55) and distillation (Standard 62). Missing areas include mechanical reduction. The NSF standards department and the NSF DWTU Joint Committee are working collectively to develop new test methods and criteria for mechanical reduction of bacteria and viruses—a “purifier” standard. Once completed, these new standards will take the place of another widely recognized standard, the “EPA Guide Standard and Protocol for Testing Microbiological Water Purifiers.”

The EPA Guide was adopted in 1986 for devices making microbiological claims of water purification where “purifier” is a treatment unit claiming to remove, kill or inactivate all types of disease-causing microorganisms from water including bacteria, viruses and protozoan cysts. The DWTU Joint Committee separates out claims for safe vs. unsafe water supplies. The draft definitions are as follows: Safe water should be potable for human consumption, as accepted by jurisdictional health or regulatory agencies. Unsafe water is defined as water that: 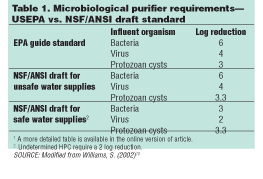 Table 1 shows the microbiological requirements of the EPA Guide and the draft of the NSF/ANSI standard for safe and unsafe water supplies.10

Conclusion
Since population growth and development continue to rise at a rapid pace around the globe, developing and maintaining an effective microbiological purifier standard is a goal that’s important to manufacturers, consumers and regulators worldwide. The next part of this brief series will discuss in more detail the model that Israel has used in trying to achieve this and what that offers others engaged in similar endeavors elsewhere.

Acknowledgment
The author would like to thank professors Avner Adin, of the Department of Soil and Water Sciences at the Hebrew University of Israel, and Ronald Gehr, of the Department of Civil Engineering at McGill University in Montreal, Quebec, Canada, for their assistance in writing this paper as well as Danny Taragan, chief executive officer at Tana Water, for his encouragement and support.