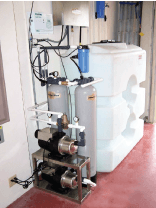 Summary: For those water treatment dealers and customers alike seeking potable water from a brackish water supply, there are plenty of options. Yet, the author points out some very important parameters to consider before selecting a system to fit a particular need.

“Brackish” is a term applied to water containing a relatively high concentration of total dissolved solids (TDS), but with a concentration below that of seawater. The Water Quality Association Glossary of Terms defines brackish water as that containing a TDS in the 1,000-5,000 parts per million (ppm) range while “highly brackish” water has a TDS in the 5,000-15,000 ppm range.

Although there are a number of technologies to reduce the TDS of water supplies for potable applications, the most common for low-volume production—such as residential uses—are distillation and reverse osmosis (RO). Both provide the ability to reduce the TDS of brackish water supplies, but their methods of operation are completely different. Distillation involves heating the water supply until it boils into water vapor, and the steam is then condensed and cooled for drinking purposes. The RO process is most closely related to filtration, but RO membranes have the ability to “filter” out dissolved salts. The actual mechanism isn’t filtration based on size exclusion. The mechanism is much more complex; however, this is an acceptable analogy.

Salt barriers
Despite the difference in the way these technologies work, they’re still subject to the same vagaries and problems associated with certain classes of chemical compounds in normal water supplies—the most notable of which are sparingly soluble salts. Calcium compounds, i.e., calcium carbonate and calcium sulfate, generally form insoluble scale as they become more concentrated. In the case of distillation, this concentration is the result of the removal of purified water during the evaporation process; with RO, it’s the concentrate stream consisting of that portion of the feed water stream that doesn’t pass through the membrane.

These salts, which become insoluble at elevated concentrations, produce scale—a general term describing the solid material that coats the heating chamber of a distiller or the surface of an RO membrane. In both cases, the scale interferes with the normal operation of the technology. In the case of distillation, it reduces heat transfer, making the unit much less efficient; for RO, scaling (occasionally combined with organics) reduces both flow and quality of the permeate stream.

Since many brackish waters are high in sodium chloride, rather than the calcium compounds that produce scaling, they present another problem—corrosion. For distillation, the particular kind of corrosion produced by the chloride ion in the boiling water will readily attack metals, even those as chemically inert as stainless steel. This isn’t as much of a problem with RO because this technology runs at ambient temperature, so plastics can be used that are virtually inert to the high concentrations of salts in brackish water supplies. On the other hand, high sodium chloride concentrations in RO applications will increase osmotic pressure (the resistance of water with high salts concentration to passage through the membrane) and require higher pumping pressures. In addition, with RO—as the TDS of the feed water goes up—the TDS of the permeate stream also increases.

The calcium challenge
Because virtually all water supplies, with the exception of seawater, are saturated in calcium carbonate, this compound presents the most obvious challenge. Fortunately, this problem is relatively easily solved. The calcium ion can be removed with a water softener, which is the logical choice for small applications such as the home. Of course, the softener will also remove magnesium that, when combined with other chemicals, can also present scaling problems. Under the right circumstances, the water softener will also remove relatively low concentrations of iron and manganese.

It turns out that the calcium cation forms numerous insoluble compounds. In addition to the notorious calcium carbonate, the second most insoluble calcium compound found in normal water supplies is calcium sulfate with a solubility limit of about 2,000 ppm. This means that if the concentration of calcium sulfate in the water reaches 2,000 ppm, it will start to precipitate out.

Because the sodium cation forms very few insoluble compounds, if calcium can be replaced with sodium (as in a regular water softener), the calcium insolubility problem can be solved. Another approach is to replace the anion with a less soluble one. In the case of our old nemesis, calcium carbonate, the carbonate ion breaks down into carbon dioxide and water by lowering the pH, and the CO2 can be removed with a scrubber. At a pH of 6.0, approximately 80 percent of the carbonate ion (including bicarbonate) is removed. Of course, the choice of the acid used to lower the pH can affect the performance of the system: If sulfuric acid is used, the relatively insoluble calcium sulfate is formed; if hydrochloric acid is used, the problem of chloride corrosion arises.

These scaling problems have resulted in a plethora of chemical additives that help minimize adherence of scale to surfaces. These range from simple polyphosphates including sodium hexametaphosphate to proprietary polyacrylic acids and other sophisticated organic compounds. 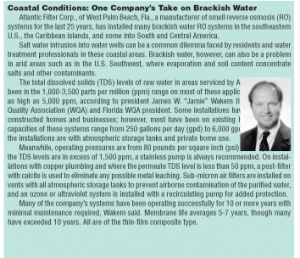 Products in question
Beware of the magnetic and electronic devices on the market that claim to eliminate scaling. With the exception of a relatively new technology developed in Germany, I am not aware of any that have been proven to work as a result of comprehensive, reputable, third-party testing. Organizations such as NSF International have attempted to convene a consortium of these manufacturers to collaboratively develop performance standards for these devices, but have been unsuccessful to date.

For scaling issues, it’s best to look at the specific chemicals that present the problem and select the most appropriate pre-treatment technology. Other foulants can interfere with the operation of brackish water treatment technologies including suspended solids and microorganisms.

Suspended solids are usually insoluble inorganic materials, and can generally be readily removed with filters including backwashable multi-media, bag or cartridge filters. On rare occasions, the particulate matter may be very fine or actually colloidal, requiring more extensive pretreatment. Silica, which may appear in colloidal form, is addressed in more detail “Behavior of Silica: Technologies and How They Rate,” by Peter Meyers (WC&P, March 2003: www.wcponline.com/PDF/0304 % 20Silica.pdf). This may include the addition of a coagulant, such as alum, to agglomerate these into larger particles that can then be removed with a filter. Crossflow microfiltration is also extremely effective in removing fine and colloidal particulate contaminants. Occasionally, oily material may be of concern and requires special technologies for effective removal. Depending on the concentration and type of oily contaminant, skimming, dissolved air flotation, alum treatment, ultrafiltration or organo-clay absorption may be effective as pre-treatment.

Microorganisms present a unique pre-treatment challenge in that one particular group, bacteria, can grow under virtually any condition and keeps coming back. The approach to take with these contaminants is to utilize technologies to continually minimize their concentrations, including chemical disinfectants (chlorine, ozone, etc.) and ultraviolet irradiation. An advantage of distillation is that most microorganisms found in typical water supplies are destroyed during the heating process; however, the purified water is quickly recontaminated by airborne bacteria in normal residential applications. Whereas the pores in RO membranes are too small to allow even the smallest microorganism to pass through, bacteria will proliferate on the permeate side of the membrane, especially if the system remains stagnant for any time period. This contamination mechanism is poorly understood and very controversial (bacterial grow-through, pinholes, leaky o-rings, etc).

Conclusion
In summary, brackish water supplies can be readily treated to produce potable quality water. As is always the case in water treatment, however, it’s critical to understand the potential treatment problems that are characteristic of the feed water so that the optimum system can be developed.

About the author
Peter S. Cartwright, president of Cartwright Consulting Co., Minneapolis, is a registered professional engineer in several states. He has been in the water treatment industry since 1974 and has published more than 100 papers and articles on related issues. Cart-wright has been chairman of several WQA committees and task forces and received the organization’s Award of Merit. A member of the WC&P Technical Review Committee since 1996, his expertise includes such high technology separation processes as reverse osmosis, ultrafiltration, microfiltration, electrodialysis, deionization, carbon adsorption, ozonation and distillation. He can be reached at (952) 854-4911, (952) 854-6964 (fax), email: CartwrightConsul@cs.com or website: www.cartwright-consulting.com