Back to the Beginning: Water Recycling Proves Its Worth at Plating Operation

Summary: When a small, California-based circuit board shop tried to expand by relocating to larger quarters, it was faced with staggering water permit fees and strict discharge limitations. By implementing a well-designed, closed-loop water system, the company reduced permitting costs by over 95 percent and solved its discharge problem at the same time.

As industry advances in once remote regions of the world, many of the potential expansions are still sitting on the drawing board because of the shortage of industry’s life blood—water. The global expansion of small electronic parts manufacturers requires a lot of water, clean water at that. A small circuit board shop may require 75,000 gallons of water per day. This is enough to cover the needs of 250 households in California and many, many times that number in the less-industrialized world. Sourcing that needed water and providing a solution requires creativity.

In the United States, the simple process of applying for a water use permit places a high financial burden on the would-be entrepreneur. Application fee rates of $5 per gallon, based on estimated daily consumption, for such access and sewer permits send many a new business owner back to the bank for additional financing. The cost of getting a permit for a 20-gallon per minute (gpm) stream may top $100,000, and that doesn’t include cost of the water at normal rates or special discharge fees.

Vector Fabrication, of Milpitas, Calif., was one such firm. Its circuit board shop, since coming online in 1995, required 50 gpm and the permit would have run in excess of $375,000 as a one-time fee for getting connected assuming discharge quality met all specifications. Not only that, the water would require extensive waste treatment to meet the local discharge requirements and a 50 gpm make-up water, pre-treatment plant for the plating and etching processes. This would eat into valuable floor space as well and require full-time technical operators.

Eliminating the need
Closed-loop water systems were not too widely utilized in the early ’90s but Vector’s vice president, Isaac Stringer, decided to look into it. Through a series of contacts, he was put in touch with an area water system engineering and consulting firm with several previous successes in closed-loop recycling of plating rinse streams and discharge volume reduction. Their approach was straightforward; however, rather than simply removing the heavy metals (copper, lead, aluminum and gold), the design removed everything through ion exchange demineralization and produced a 50 gpm discharge of <2 parts per million (ppm) of deionized (DI) water. This stream then became the make-up source, eliminating the need for raw water pretreatment and essentially eradicating the discharge stream in the process.

Throughout the plant, plating line rinse tanks are fed a continuous stream of DI water. Because the water is reclaimed, there’s no need to skimp on the tank turnover rates. The total dissolved solids (TDS) in the rinse tanks rarely builds beyond 10 ppm and, compared to other shops using tap water or even softened tap water, Stringer reports that his rejection rates on boards is much, much lower. DI water is also used for the make-up of the plating bathes themselves, thus eliminating chemical incompatibilities with the plating chemistry and further improving quality and efficiency.

Making the ‘transfer’
The rinse tanks throughout the production area are of different sizes and levels above the ground plane. Therefore, it was necessary to install a “transfer” station below floor level where the overflows converge into a common sump. Submersible pumps then transfer the rinse waters to a floor-level, atmospheric, make-up sump. The use of atmospheric tanks is to prevent siphoning when the system is shut down. A float valve in the make-up sump maintains the total amount of water in the system by automatically adding city water to compensate for losses from evaporation and drag out, or carryover to subsequent tanks during final processing steps.

There’s a little bit of math involved in sizing the transfer and make-up sumps so that they neither overflow nor give “low water” alarms to pump controls. When the system shuts down, all overflows are transferred back to the make-up sump and there has to be room for it. Also, when the system starts up, there’s a drop in the make-up sump until the pipeline has filled and the rinses are recycled back. The make-up sump must be of sufficient volume to prevent starvation of the system pump and avoid cavitation. 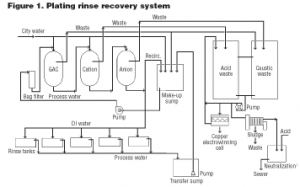 Rinse waters from the make-up sump are pumped through a 5-micron (µm) bag filter and a granular activated carbon (GAC) filter before entering the DI system. Filtration removes particulates (bits of plastic and dust from the board fabrication) and organics (from cleaning and process chemicals), thus protecting the DI columns.

In addition, the GAC column back-washes with reclaimed water so carbon fines are captured in the bag filter. If micro-fines are present (generally indicated by gray water coming from the GAC column during the settling rinse), the system is allowed to recirculate until it clears up. This is done while bypassing the DI system. On a subsequent backwash, the GAC column will backwash with city water directly to the wastewater treatment batch tank where the fines are ultimately trapped in the precipitated sludge.

The DI system incorporates a strong acid cation followed by a strong base anion. Since this system sees basically DI water with a few parts of copper and such, it can run about two weeks before exhaustion. Regeneration is with sulfuric acid and caustic using city water. The cation regenerates first and then is used to produce de-cationized water for the anion regeneration. The acid and caustic wastes are directed to separate waste tanks. Service rinse is a recirculating rinse from the make-up sump and back. Some capacity is sacrificed during the rinse for the sake of minimizing the waste volume. This plant does not operate around the clock so they can regenerate the single train line as needed.

Sulfuric acid is used for the cation regeneration because the copper discharged in the spent regenerant is reclaimed through an electrowinning cell. This reduces the copper from about 15,000 ppm to around 100 ppm as it recirculates through the cation waste tank. Better than 99 percent of the copper content of the cation waste is sufficiently reduced when the stream is diverted through a rather cleverly designed proportioning system that combines the acid and caustic waste streams. By design, the resulting pH is alkaline and this precipitates the remaining copper. The sludge is removed through a filter press and the metal-free waste stream is then neutralized and discharged to the city sewer. The value of copper recovery helps offset the cost of the sludge disposal.

All in the reclaim
The resin regeneration consists of: 1) backwash followed by 2) chemical draw, 3) displacement rinse, and 4) fast rinse. Only the chemical draws and slow rinses—displacement rinses—are sent to the treatment plant. The backwash and fast rinses—quality rinses prior to putting the system back in service—are recirculated from the make-up sump. Only the chemical draw in the slow rinses, or displacement rinse is used to push the chemical through. The total waste stream is about 35 gallons per cubic foot (g/ft3) of resin every two weeks. Spent plating baths are sent directly to the acid waste storage tank. Cleaning tanks go to the caustic waste tank. Since start up, Vector estimates that it has averaged better than a 98-percent reclaim of its water usage and the savings have extended directly to its sewer permit as well. Vector did this by sending its waste stream “back to the beginning.”

Eliminating the make-up treatment plant and reducing the size of the batch plant also reduced the total footprint by over 50 percent. This entire 50-gpm treatment facility including chemical and waste storage, copper reclaim, sludge press and neutralizer is fit into a 350-square-foot, birmed section of the plant.

Conclusion
Vector vice president Stringer stated, “This system paid for itself many times over in the first year of operation.” He added, “We are considered good neighbors by the city of Milpitas, Calif., because we are a low-discharge operation and we are not putting a big demand on the local water supply.”

Vector was nominated recently for an award for its eco-minded water treatment facility. Stringer said when prospective clients come to visit, they recognize the use of DI water as an insurance policy for quality and that simple fact has often tipped the scales in Vector’s favor. “The treatment system started up without a glitch and has run continuously since 1995 without an unplanned shutdown. We couldn’t be happier,” he said.

About the author
C.F. “Chubb” Michaud is technical director of the Systematix Company, of Buena Park, Calif. A University of Maine graduate, he holds bachelor’s and master’s degrees in chemical engineering. He has over 35 years of field experience and holds several U.S. patents on ion exchange processes. An active member of the Water Quality Association, Michaud serves on several technical committees currently chairs the Commercial/Industrial Section Committee. He serves on the Pacific WQA Board of Directors and is past chair of its Education Committee. He’s also a founding member of the WC&P Technical Review Committee. Michaud can be reached at email: cmichaud@systematixUSA.com